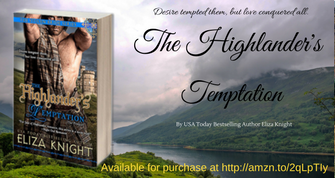 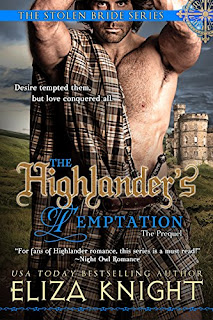 Prequel to the Stolen Bride Series...


Desire tempted them, but love conquered all…


Laird Jamie Montgomery is a warrior with a mission. When he travels to the northern Highlands on the orders of William Wallace, temptation in the form of an alluring lass, could be his undoing.


Lady Lorna Sutherland can’t resist the charms of one irresistible Highlander. Though she’s been forbidden, she breaks every rule for the
pleasure of his intoxicating embrace.


When their love is discovered, Jamie is tossed from Sutherland lands under threat of death. But danger can’t keep the two of them apart. No matter what perils may try to separate them—Lorna and Jamie swear they’ll find a way to be together.

Highlands, Scotland
THEY galloped through the eerie moonlit night. Warriors cloaked by darkness. Blending in with the forest, only the occasional glint of the moon off their weapons made their presence seem out of place.
’Twas chilly for spring, and yet, they rode hard enough the horses were lathered with sweat and foaming at the mouth. But the Montgomery clan wasn’t going to be pushed out of yet another meeting of the clans, not when their future depended on it. This meeting would put their clan on the map, make them an asset to their king and country. As it was, years before King Alexander III had lost one son and his wife. He’d not remarried and the fate of the country now relied on one son who didn’t feel the need to marry. The prince toyed with his life as though he had a death wish, fighting, drinking, and carrying on without a care in the world. The king’s only other chance at a succession was his daughter who’d married but had not yet shown any signs of a bairn filling her womb.
If something were to happen to the king, the country would erupt into chaos. Every precaution needed to be taken.

Young Jamie sat tall and proud upon his horse. Even prouder was he, that his da, the fearsome Montgomery laird, had allowed him to accompany the group of a half dozen seasoned warriors—the men who sat on his own clan council—to the meeting. The fact that his father had involved him in matters of state truly made his chest puff five times its size.
After being fostered out the last seven years, Jamie had just returned to his father’s home. At age fourteen, he was ready to take on the duties of eldest son, for one day he would be laird. This was the perfect opportunity to show his da all he’d learned. To prove he was worthy.
Laird Montgomery held up his hand and all the riders stopped short. Puffs of steam blew out in miniature clouds from the horses’ noses. Jamie’s heart slammed against his chest and he looked from side to side to make sure no one could hear it. He was a man after all, and men shouldn’t be scared of the dark. No matter how frightening the sounds were.
Carried on the wind were the deep tones of men shouting and the shrill of a woman’s screams. Prickles rose on Jamie’s arms and legs. They must have happened upon a robbery or an ambush. When he’d set out to attend his father, he’d not counted on a fight. Nay, Jamie merely thought to stand beside his father and demand a place within the Bruce’s High Council.

Swallowing hard, he glanced at his father, trying to assess his thoughts, but as usual, the man sat stoic, not a hint of emotion on his face.
The laird glanced at his second in command and jutted his chin in silent communication. The second returned the nod. Jamie’s father made a circling motion with his fingers, and several of the men fanned out.
Jamie observed the exchange, his throat near to bursting with questions. What was happening?
Finally, his father motioned Jamie forward. Keeping his emotions at bay, Jamie urged his mount closer. His father bent toward him, indicating for Jamie to do the same, then spoke in a hushed tone.
“We’re nearly to Sutherland lands. Just on the outskirts, son. ’Tis an attack, I’m certain. We mean to help.”
Jamie swallowed past the lump in his throat and nodded. The meeting was to take place at Dunrobin Castle. Why that particular castle was chosen, Jamie had not been privy to. Though he speculated ’twas because of how far north it was. Well away from Stirling where the king resided.
“Are ye up to it?” his father asked.
Tightening his grip on the reins, Jamie nodded. Fear cascaded along his spine, but he’d never show any weakness in front of his father, especially now that he’d been invited on this very important journey.
“Good. ’Twill give ye a chance to show me what ye’ve learned.”
Again, Jamie nodded, though he disagreed. Saving people wasn’t a chance to show off what he’d learned. He could never look at protecting another as an opportunity to prove his skill, only as a chance to make a difference. But he kept that to himself. His da would never understand. If making a difference proved something to his father, then so be it.
An owl screeched from somewhere in the distance as it caught onto its prey, almost in unison with the blood curdling scream of a woman.
His father made a few more hand motions and the rest of their party followed him as they crept forward at a quickened pace on their mounts, avoiding making any noise.
The road ended on a clearing, and some thirty horse-lengths away a band of outlaws circled a trio—a lady, one warrior, and a lad close
to his own age.

The outlaws caught sight of their approach, shouting and pointing. His father’s men couldn’t seem to move quickly enough and Jamie watched in horror as the man, woman and child were hacked down. All three of them on the ground, the outlaws turned on the Montgomery warriors and rushed forward as though they’d not a care in the world.
Jamie shook. He’d never been so scared in his life. His throat had long since closed up and yet his stomach was threatening to purge everything he’d consumed that day. Even though he felt like vomiting, a sense of urgency, and power flooded his veins. Battle-rush, he’d heard it called by the seasoned warriors. And it was surging through his body, making him tingle all over.
The laird and his men raised their swords in the air, roaring out their battle cries. Jamie raised his sword to do the same, but a flash of gold behind a large lichen-covered boulder caught his attention. He eased his knees on his mount’s middle.
What was that?
Another flash of gold — was that blonde hair? He’d never seen hair like that before.
Jamie turned to his father, intent to point it out, but his sire was several horse-lengths ahead and ready to engage the outlaws,
leaving it up to Jamie to investigate.
After all, if there was another threat lying in wait, was it not up to someone in the group to seek them out? The rest of the warriors were intent on the outlaws which left Jamie to discover the identity of the thief.
He veered his horse to the right, galloping toward the boulder. A wee lass darted out, lifting her skirts and running full force in the opposite direction. Jamie loosened his knees on his horse and slowed. That was not what he’d expected. At all. Jamie anticipated a warrior, not a tiny little girl whose legs were no match for his mount. As he neared, despite his slowed pace, he feared he’d trample the little imp.
He leapt from his horse and chased after her on foot. The lass kept turning around, seeing him chasing her. The look of horror on her face nearly broke his heart. Och, he was no one to fear. But how would she know that? She probably thought he was after her like the outlaws had been after the man, woman and lad.
“’Tis all right!” he called. “I will nay harm ye!”
But she kept on running, and then was suddenly flying through the air, landing flat on her face.
Jamie ran toward her, dropping to his knees as he reached her side and she pushed herself up.
Her back shook with cries he was sure she tried hard to keep silent. He gathered her up onto his knees and she pressed her face to his leine shirt, wiping away tears, dirt and snot as she sobbed.
“Momma,” she said. “Da!”
“Hush, now,” Jamie crooned, unsure of what else he could say. She must have just watched her parents and brother get cut to the ground. Och, what an awful sight for any child to witness. Jamie shivered, at a loss for words.
“Blaney!” she wailed, gripping onto his shirt and yanking. “They hurt!”
Jamie dried her tears with the cuff of his sleeve. “Your family?” he asked.

She nodded, her lower lip trembling, green-blue eyes wide with fear and glistening with tears. His chest swelled with emotion for the little imp and he gripped her tighter.
“Do ye know who the men were?”
“Bad people,” she mumbled.

Connect with her at http://www.elizaknight.com or http://www.historyundressed.com. You can sign up for her newsletter at  http://eepurl.com/CSFFD. Follow her on social media at:

Book featured at The Literary Nook

Book featured at The Dark Phantom

Book featured at A Book Lover

Book reviewed at My Book Addiction and More

Book featured at Mello and June