Sick Like That
by Norman Green
GENRE: Mystery (Detective)

Norman will be awarding an digital copy of Sick Like That to 3 randomly drawn winners via rafflecopter during the tour. Please visit GoddessFish.com to follow the tour, remember the more you comment better your chances on winning. 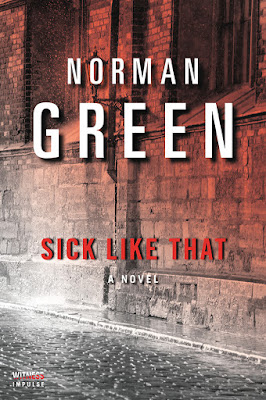 PI Marty Stiles was shot and paralyzed and is now in rehab, trying to decide whether to fight to recover. Meanwhile, his agency is being run by two women: the street-smart and savvy Alessandra Martillo, who’s the muscle, and Sarah Waters, a naïve, single mom, new to the job but who quickly becomes the brains. Though the two women grew up only a few miles from each other in Brooklyn, it might as well have been worlds apart. Now they’re partners, and for all their differences, are committed to their joint venture. When Sarah’s deadbeat ex-husband gets into trouble, Al would rather let him suffer, but she agrees to help Sarah figure out where he is and why another man has ended up dead.

This follow-up to The Last Gig features a tough and edgy, one-of-a-kind heroine—an entirely fresh take on the hardboiled women private investigators who dominate so many crime fiction classics.

Guy in a stocking hat sitting across the aisle stared at her, she stared back until he fi nally looked away. Your own fault, she thought, the dress was the shortest one she owned, but she had her reasons for that. This dress don’t wake Marty up, maybe he’s better off dead after all. Still, it was late, it was dark, and she and Mr. Personality were the only two passengers in the car. One other guy riding between cars, he peered through the dirty door glass, made eye contact with Mr. P, then looked away.

Al felt a flutter somewhere between her stomach and her throat.

Well, baby, you ain’t gonna outrun anybody in those high heels . . .

She picked up the camera bag she used in lieu of a purse. Not heavy enough for a weapon, she thought, nothing in there to stab someone with or shoot them or otherwise inflict bodily harm. Shove a lipstick into his eyeball, maybe . . .

Al got up, walked over and stood in front of the center set of exit doors. Mr. Personality got up, too, stood smirking at his reflection in the glass of the rear exit doors.

You could lose the shoes and run, she thought.

Buck eighty for those babies, yo. How long’s it take you to clear a buck eighty to piss away on a pair of shoes?

The train slid into the empty station and stopped with an echoing jerk, and then all the exit doors rattled open simultaneously. Al stepped out, watched as Mr. Personality did the same. She stood, waiting, and he stayed by his doors, too, just in case she decided to try and jump back in when they began to close. Al guessed that Mr. Personality’s associate, the guy who’d been riding between the cars, had gotten off , too, but he had to be a bit farther away and so she focused on the first guy.

The doors closed behind her, the train lurched into motion.

The guy turned to her and smiled. “Hey, chica,” he said. “Where you goin’, baby? All dress up nice like that? You like to party?”

He took a step in her direction, patted his rear pocket unconsciously before spreading his hands out wide. Probably got a knife there, she thought. “You don’t got to go no place, chica. We gonna party right here.”

She heard unhurried footsteps coming from the other direction, but they weren’t close yet. “Don’t you wanna know who my cousin is?”

“Rocco Parisi,” she said. Parisi, a mobster with a well- earned reputation for violence, was known from one side of Brooklyn to the other.

Page one is always the hardest part.

I really liked writing from a woman’s POV. Assuming the identity of a person vastly different from yourself is a uniquely rewarding aspect of writing.

People, art… I have a print of Van Gogh’s ‘Avenue of Poplars’ on the wall in my den, it’s just charcoal on paper, there’s a whole story right there but so far I only have a little piece of it.

God, yeah. When I get stuck I’ll work on something else for a while, or I’ll go back and read what I’ve done so far, not to edit but just to maybe get a clue on what I did that’s gotten me hung up. And if that doesn’t work, I’ll write something out of sequence, or maybe something in a minor character’s voice, just to get going again.

Norman Green is the author of six crime novels, most recently Sick Like That. Born in Massachusetts, he now lives in New Jersey with his wife.