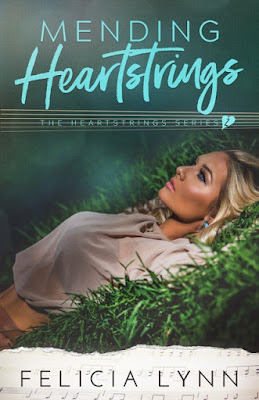 The second book in the HEARTSTRINGS Series by Felicia Lynn has re-launched!
Each book is just .99 cents! 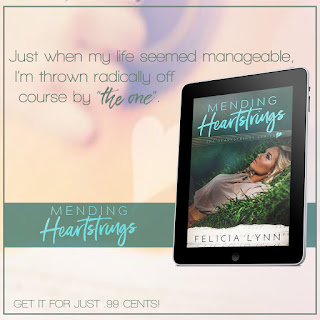 “Dude, what the hell is wrong with you? I’ve had enough of this shit, enough of your shit!” Garret is yelling when he marches onto the tour bus. “I can’t have a babysitter come hunt your ass down before every sound check and every damn show!” He’s pissed because I was zoned out, writing some of the best lyrics I’ve ever written and missed the start of sound check, but nonetheless, I made it. No big deal. Actually he’ll be thanking me when he hears the songs I came up with later.
“Garrett, chill out man. I was writing and lost track of time,” I say, standing from the couch and head to the liquor cabinet for my bottle of Jack. I take the bottle and bring it to my lips, but I can’t lift it high enough to take a swig with him yanking the bottle away. I’m not sure if he pushes me or I’ve fallen, but my ass meets the stiff foam couch of the tour bus either way.
“Fucking enough, Jon,” Garrett says, his anger is dissipating. There’s a veil of concern and sympathy harnessing some of that anger. “Just fucking enough. You can’t keep doing this and expect me sit here and watch you kill yourself. No more, man. Not on my damn watch. I can’t live with that regret. It’s time for you to get help.”
Who the hell is this guy kidding? I’m fine. I’ve told him this a thousand times. We just finished an amazing show and I’m damn good at my job. I really am fine. It’s the rest of these people with sticks up their ass he should be worried about, and damn . . . he’s one of them lately. I like to have a little fun. What’s the damn harm in that? There’s nothing to quit if I don’t have a problem, and I could snap myself out it in a second if there was one anyway. I’m good as Jack Daniel’s gold – no issues here.
“Man, I’m fine. Quit worrying. You’re looking at me like your dog just died. Your damn vagina is showing. It’s past time for you to go get laid, McKenna. I keep trying to help you, man, but you gotta just relax and let shit roll. Ya know?” I encourage, flipping the scene to get past the heavy shit he’s putting on the table.
I start to stand and head to the bathroom with my buzz quickly fading. I need to fix this shit fast before he ruins my night, but as soon as I stand he’s on my heels.
“Hell no you’re not. Sit your ass down. You’re not gonna escape me helping you find Jesus by going in there to get more fucked up. Not happening, Jon,” he insists, blocking my entrance to the tiny little hall. Drew and Eric chose that second to walk onto the bus so I fall back to my position on the couch hoping it’s just a matter of time until they distract him. Maybe one of them will stick up for me for once and tell him to shut the hell up. It’s only fair, but since everybody seems to think Garrett McKenna’s word is law around here it’s doubtful anyone will have my back. Pussies.
Drew and Eric look between Garrett and me trying to read the tension floating between us, but I’m not giving anything up. Damn, I’m not the one with issues anyway. Maybe it’s time they had words with their top damn dog and help the man loosen up.
Garrett and I have been friends for eight long ass years. We both arrived in Nashville about the same time and found jobs cooking breakfast in a crappy little diner part time. We bonded, and together we beat the streets of Nashville searching for any available stage that would let us play. With all the hard work we put in, I stayed on with his band after he signed, but I didn’t sign up for this shit. That’s for sure.
“Everything okay?” Eric asks cautiously.
Garrett doesn’t look at him or even respond. Holding up his right hand, he dismisses them never taking his eyes off me. While he stares daggers into my damn soul, I know there’s no way in hell he’s going to let me leave without a fight. Determined to get out of here, I stand to leave the bus. “To hell with this, McKenna.”
Garrett positions himself in front of me, pushing me back down on the couch before I find my balance. “Fuck!” I yell, slamming back into the seat jarring me harder than necessary. He might be mad as hell, but I am too. Unfortunately though, he has the upper hand since I’m too damn weak to fight him with this buzz wearing off and making me ache. Folding my head into my hands, I have no choice but to wait him out. It’s all I’ve got. He shouldn’t expect me to participate in this damn duel without a weapon, but it seems he does. The fuming silence fills every inch of the bus until I feel like I can’t even breathe anymore. An hour could have passed in this uncomfortable hush or maybe it’s been less than five minutes. Who knows, but it’s been long enough that his eyes are burning a hole into my head even though I refuse to make eye contact with him. McKenna has superman’s strength in will power and I’ve got no clue how I’m going to get past him to get the hell out of here.

Felicia Lynn, author of The Learning Curve series and Heartstrings series, is a transplanted Florida girl, born and raised, who lives just north of Atlanta, GA. She spends most of her days holed up in a cozy chair with her laptop, writing about the characters that live in her head. When she’s not writing, you’ll find her hanging out with her family and friends or interacting with her readers and fellow book lovers on social media! She loves traveling, reading, live music, baseball, good food and great company.

Felicia writes contemporary romance and co-wrote The List, a mystery/suspense book she collaborated on with professional poker player, Chris Bell.