Claire Marti will be awarding a $10 Amazon/BN GC to a randomly drawn winner via rafflecopter during the tour. Please visit GoddessFish.com to follow the tour, remember the more you comment better your chances on winning. 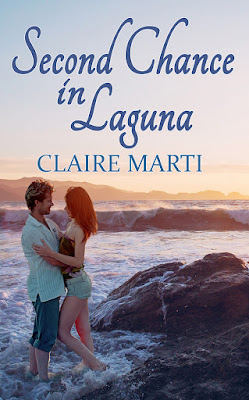 When Sophie Barnes’s fiancé jilts her at the altar, her carefully planned life implodes. Considering her ex’s betrayal to be a rude wake-up call, she leaves everything she knows in San Diego and flees to Laguna Beach. She vows to transform her life by avoiding men for a year and by fulfilling her dream of writing a wildly successful novel.

Sophie’s new landlord, Nicholas Morgan, is a gorgeous, successful architect with a player reputation. He makes it tough for Sophie to remember that she’s sworn to be single. Nick’s avoided the intimacy of a long-term relationship--until Sophie’s independence, courage, and beauty touch his guarded heart. Both Sophie and Nick are terrified of being hurt again, but can they resist the pull of true love?

Kelly hopped into the front seat of the car, leaving Sophie no choice but to sit in the back.

She scrunched down in her seat. How had he maneuvered her into spending another evening with him? Why was he so persistent? And, why was it annoying to be relegated to the back seat, like a kid? She stuck her tongue out at him.

Nick’s glance caught hers in the rear view mirror—of course he’d looked at the exact moment she’d given in to childish impulse. His mouth quirked at the corners before he shifted his focus to the road.

Not that she cared what he thought one way or the other as she was planning on being a single novelist for the foreseeable future.

They arrived at Vines, a charming little wine bar. When the valet opened Sophie’s door, she resolved to have a good time. She’d promised herself a new life and her best friend was visiting. Just enjoy it.

Nick offered one arm to Kelly, who accepted it with a smile. He offered his right arm to Sophie. Goose bumps erupted down her spine the moment her hand touched his sinewy forearm.

Interview with the author:

Second Chance in Laguna is my first novel. I loved many things about writing Nick and Sophie’s story. I enjoyed the learning curve and how to take a concept and transfer it to the page.

I’m inspired by life, with all its beauty and all its darkness. I work hard to live my life in the present moment. When things feel challenging, I come back to the basics of gratitude for nature, my health, my husband, my friends and family, and my two cats and dog. In terms of writing, I’m inspired to share stories to provide readers an escape to a world where happily ever after exists.

I’d say Ernest Hemingway and Nora Roberts are my favorites and my biggest influences. I fell for Hemingway early and read A Moveable Feast about one hundred times. His writing makes Paris come alive. He was a master craftsman of the written word. Nora Roberts is my favorite mainstream writer. Her romances feature humor, clever characters, palpable chemistry, and vivid settings. I can escape into the world she creates in her books.


I’m finishing up the Finding Forever in Laguna series in the next few months. I’m in deep edits of the third book. It stars tall, dark, and gorgeous Christian Wolfe and petite, brilliant, golden Kelly Prescott.

Christian is a veteran with PTSD who owns the local wine bar in Laguna. Kelly is Sophie Barnes’ (heroine from Second Chance in Laguna) best friend. She’s an attorney starting a new role as General Counsel in a wounded warrior-type foundation.
Then, I’m planning a Regency series and a women’s fiction novel set in Paris and Antibes in the 1920’s. Do you ever get writer’s Block? Any tips on how to get through the dreaded writer’s block? Of course I do! I teach yoga and am a big believer in balancing physical activity with writing. Once I make myself plant my butt in the chair, I’m able to write. I’ll force myself to write for an hour, even if I can only produce a paragraph. Then, I’ll reward myself with some yoga or take my dog Josie for a walk down to the beach.

Claire Marti started writing stories as soon as she was old enough to pick up pencil and paper. After graduating from the University of Virginia with a BA in English Literature, Claire was sidetracked by other careers, including practicing law, selling software for legal publishers, and managing a non-profit animal rescue for a Hollywood actress.

Finally, Claire followed her heart and now focuses on two of her true passions: writing romance and teaching yoga. Her debut releases from The Wild Rose Press on March 31, 2017 and is the first in the Finding Forever in Laguna series.