Blurb Blitz w/Giveaway: Among the Branded by Linda Smolkin

Among the Branded
by Linda Smolkin
GENRE: Contemporary Fiction

Linda will be awarding a $25 Amazon or B/N GC to a randomly drawn winner via rafflecopter during the tour. Please visit GoddessFish.com to follow the tour, remember the more you comment better your chances on winning. 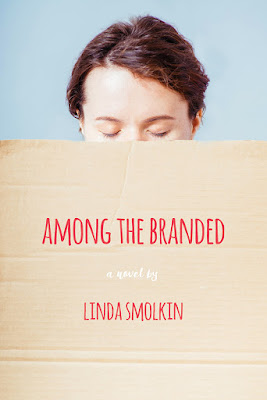 While attending Valor of the ’40s, art director Stephanie Britain stumbles upon a flea market selling letters from the war. She buys a handful, hoping they’ll inspire the redesign for a client’s website at her branding and design firm. She’s at first drawn by the lost art of penmanship, but soon discovers a hidden treasure nestled inside declarations of love from homesick soldiers. Stephanie enlists a coworker to translate one and realizes it’s not a love letter after all. When a shocking discovery about a client causes Stephanie to question her principles and dedication to her firm’s business, she’s forced to make a difficult decision—one that could give her peace of mind, yet ruin her career in the process.

Contemporary fiction with elements of suspense, Among the Branded explores family life, an unexpected friendship, and moral conflicts that make us wonder what’s more important: our livelihood, or our beliefs.

My phone pinged, and I grabbed it from my pocket. These days, I had to put all my reminders in the phone, or I’d forget to take care of them. Everything was in there. Change the sheets. Take Jack to taekwondo. Pay the bills. Water the plants. This time it was a more interesting reminder about our getaway.

We decided to take a short trip after dropping Jeremy off at college, and Jack would choose the place, within reason. For the past few months, we’d been so busy finalizing college plans, shopping for supplies, stockpiling food for Jeremy, and now it was Jack’s turn for attention. I cleared the reminder from my phone and asked if he’d made a decision.

“Let’s go to the Bahamas, to that resort in the commercials.”

“Sweetie, it’s hurricane season, and I can’t take that much time off work. What if we hit a few theme parks?”

Sveta walked in, overhearing our conversation. “Since you like costumes so much, why don’t you go to Valor of the ’40s?”

“What do costumes have to do with it?” I asked.

“You were so good as Ripsie. Maybe you’ll want to reenact a war.”

“Only about dressing up. Jack would love it. They have World War II planes, tanks, all that cool stuff. And it’s near Jeremy’s college.”

Linda Smolkin always wanted to be a writer—ever since she saw her first TV commercial and wondered how to pen those clever ads. She got her degree in journalism and became a copywriter. Linda landed a job at an advertising agency, where she worked for several years before joining the nonprofit world. She’s the author of the novels Among the Branded (May 2017) and The Arrival of Elsa (March 2018). When not in front of the computer, she’s behind the drums (slightly) annoying her husband, son, and their 70-pound dog. She grew up on the East Coast and currently calls Virginia home.