Dilys J Carnie will be awarding a $20 Amazon or Barnes and Noble GC to a randomly drawn winner via rafflecopter during the tour. Please visit GoddessFish.com to follow the tour, remember the more you comment better your chances on winning. 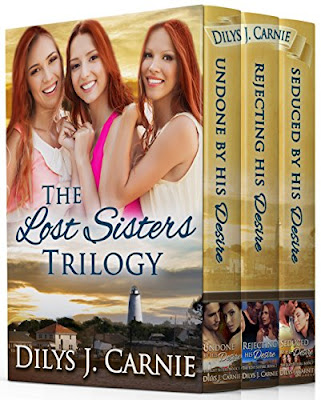 Undone By His Desire Micah King arrives in North Carolina with one goal—to verify that Daisy Wallace is one of the women his security firm has been hired to locate. He wants to tell her the truth about why he's there, but first he needs to make sure that she is indeed who he's looking for. He never meant to get involved with her, but she's just so tempting. Will Daisy be able to forgive Micah's lie by omission? After all, he's deceived her from the first moment she laid eyes on him, and she's had her fill of deceitful men. And can she forgive the woman who gave her up for adoption thirty years ago? Rejecting His Desire Rose Eagleton has never let anyone penetrate her tough exterior. She won't allow herself to be hurt again, nor will she let anyone uncover the secrets of her past. When she meets Jack Calloway he refuses to let her hide behind her shell, but she knows one thing for sure—she can't let him become important to her. Jack is intrigued by the beautiful young woman who fights so hard to keep him at a distance. As he discovers the secrets she's trying so desperately to hide, it becomes clear that her life is in danger. Can he break through her shell and provide her with the protection she needs but refuses to accept? Seduced By His Desire Kent Lloyd steps onto British soil wishing he was anywhere else. But when Jasmine Owen refuses to visit her newly found sisters, giving them one lame excuse after another, even Kent knows something is seriously wrong. The last person Jasmine expects or wants to see at her door is the super sexy man who walked away from her bed after one wild night. But when her sisters suspect something is wrong, they send Kent to check on her. Jasmine hasn't told her family about the stalker who's making her life a living hell and has her in a constant state of fear, but it looks like she might not be able to keep the truth from them any longer. Content Warning: contains adult language and explicit sex.

There was something in her eyes. Unease? Or was it panic? Whatever it was, Rose didn't look at Jack long enough for him to find out. She headed toward the piano and took her place on the stool. Then she surprised the hell out of him by playing When Summer Comes by Oscar Peterson.

He sat back and took a sip of his Coke, letting the music roll off him. He was absolutely mesmerized by her. As he listened to the music run from her fingers, he found that he was more relaxed than he'd ever been. The last note of music was like a caress, a whisper of sound. The room was filled with silence, and then it erupted into applause.

Jack watched as Rose made her way across the room toward the bar, her dog at her heels, having apparently forgotten that she'd left her drink at his table. Picking it up, he followed behind her.

Rose looked up as he sat opposite her.

"Your drink. You play great." He slid the glass across the bar for her, and as she clutched hold of it, their fingers touched. A sizzle of electricity flew up his arm at a speed that shocked him, and he drew his hand away. When he looked at her, he saw that glimpse of desire that she kept well hidden. He swallowed back at the tremendous power he'd felt between them.

"Thank you," she said, taking the drink from him.

Looking down at his watch, he saw it was a little after one AM, and he noticed that the crowd was beginning to thin out as people started to leave.

He didn't get a chance to speak to Rose as she cleared away dishes and cleaned the tables. Jack took the opportunity to answer some emails on his phone. He checked in with Kent, making sure the office was okay and there was nothing important that needed his attention. When Jack looked up, the club was empty.

"Come on, you guys. The cab is here for you." Rose spoke to the three staff that was left.

The girls picked up their purses and followed Tommy, each one bidding Rose goodbye.

Rose walked with them to the outside door at the front of the club. Jack got up from his stool and took his glass to the sink behind the bar, rinsing it out.

A barking reached his ears then a scream that had Jack sprinting from behind the bar and across the floor, swinging the double doors open. It could only have taken him a few seconds. Rose was on the floor with Harley lying across her, snarling. There was blood coming from her forehead, and she was unconscious.

Harley was growling at him as he approached.

"Harley, you have to let me look at her." He crouched down, gauging the dog at eye level. "Hey, buddy, we both want the same thing. I won't hurt her."

He slowly reached toward her forehead. The dog snarled, but he kept going. He figured that he would be quick enough to move back if Harley went for him.

"Easy, boy. I just want to look." Whether it was his low tone or what, he didn't know, but the dog let his chin drop on Rose's chest.

Jack brushed her hair from the sticky residue, looking at the gash just above the old scar already there. It wasn't deep, but it bled pretty bad—head wounds always did.

"Rose." He let his fingers gently stroke her cheek, aware that Harley watched him closely. "Rose, come on, open your eyes."

A flickering, then those dark lashes swept upward. The skin between her eyes crinkled, and she immediately looked down, gasping.

Happy that his master was awake, Harley moved away, but not from her side. Jack helped her into a sitting position. While she was focusing, he strode over to the door, looking outside, but there wasn't a soul in sight.

I live on Anglesey which is a small island in North Wales.My life here is busy as I help with the family business (general dogsbody lol) and try and fulfill my writing contracts. My office is under the stairs of our small welsh cottage and this is where I let my imagination run riot.
I love to write and be creative with my characters. At the moment I am in awe of the people who have read my book, It is great to meet people who have taken the time to buy it and read it and I love meeting new fans.