Losing a Piece of Me
by K.B. Andrews

Enter below for a chance to win K.B. Andrews ebooks
(that are released as of date of giveaway) and a swag pack from
K. B. Andrews 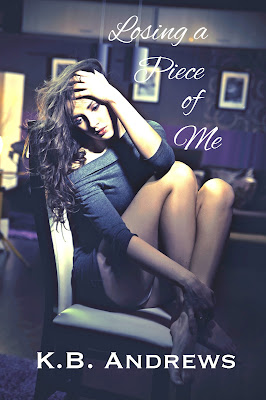 I have a secret.

A secret that chased me away from my home, my family, away from the only man I've ever loved.
I took that secret and pushed it down inside of me.
So far down, that it never had a chance of coming out.
That dirty little secret was like a seed. A seed that took root and grew to become a piece of me.
But what happens when that secret has finally outgrown me?
When its vines climb over every wall I have in place?
When it finally overfills that little spot inside of me that it's been buried in for so long now?
All secrets come out eventually.
I just hope mine doesn't destroy everyone I love. 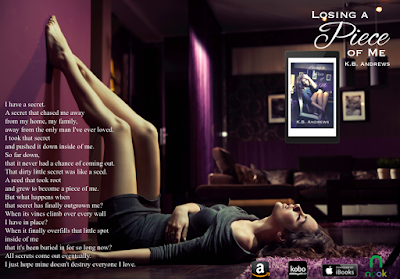 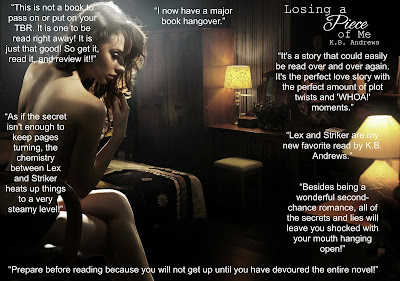 Tell us about Losing a Piece of Me.


Losing a Piece of Me is about a girl who has to go home and deal with the mess she left six years before. She has to face her family, friends, and the man she loves after she left them without a word. It’s a book full of secrets, lies, betrayals, and heartbreak.

What initially inspired you to write Losing a Piece of Me?

I have no idea. I was bored while I was waiting for edits to come back on another book. When I started writing it, I didn’t know anymore than a girl has to come home after running away.

Tell us little about the characters in Losing a Piece of Me.

Lex is closed off and stubborn. She takes all of the pain on herself to keep the people she loves from being hurt.

Striker is the troubled boy next door. He’s lived a hard life and the only thing that made it better was Lex. When she left, he lost a piece of himself.

I don’t know. I didn’t have any problems with this book. This was one that wasn’t planned, but when I went to write it, it just poured out of me. I wrote almost the whole thing in two weeks from my phone while I waited for my daughter to get out of school. I couldn’t stop writing it!

My favorite part in this book is the motorcycle scene with Striker and Lex. He challenges her to feel again. It’s a very deep, emotional scene where you can just feel the love, anger, and tension between them.

I have a new release called, Taking Down Brooklyn, that I wrote with Author Kelly Moore. It releases August 15. It’s very different from any of my other books. This one is filled with action and suspense.

After that, I plan on writing a fourth book for The Chance Series. This one will be in Dane and Alissa’s pov. 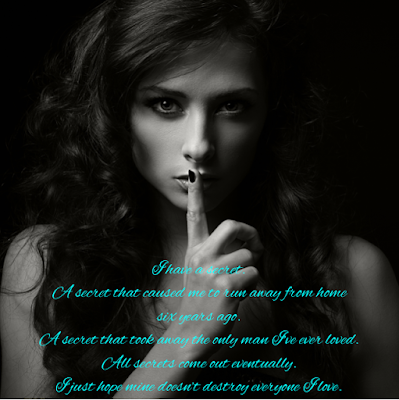 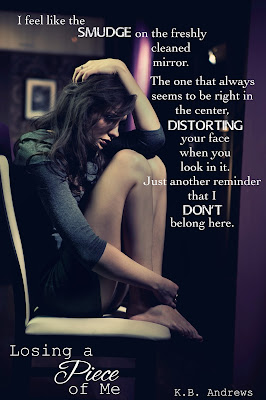 K.B. Andrews was born and raised in a small town in Southern Illinois. She started making up stories when she was a young child and started writing them before she could even spell, driving her mom crazy by asking her how to spell words. As she got older, the writing fell away but the stories never stopped. Once she got her first Kindle, she was introduced into the indie world and everything else is history.