Blog Tour w/Giveaway: Her Spy To Have by Paula Altenburg

HER SPY TO HAVE Blog Tour and Sale Alert!
The games are about to begin with HER SPY TO HAVE by Paula Altenburg. When Isabelle finds herself stranded in Bangkok, she has no choice but to accept Garrett, a stranger’s help in getting home. For these enemies to lovers, it soon becomes a game of keeping secrets. Fans of Jill Shalvis and Roxanne St. Claire will enjoy this sensual but humorous James Bond meets Justin Trudeau romance.

We are excited to announce that HER SPY TO HAVE is currently on sale for only $0.99! Don’t miss out on this brilliant read and grab your copy today! Be sure to enter the giveaway to win a $50.00 Amazon gift card! 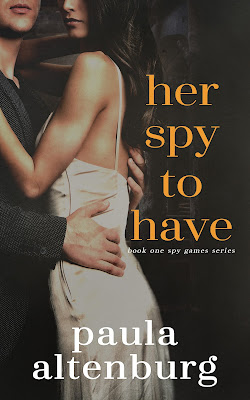 Au pair and ex-pat Isabelle Beausejour has been living abroad for most of her twenty-four years, traveling the world with her irresponsible father. When Isabelle finds herself stranded in Bangkok, with no job, no money, and nowhere to turn, she soon becomes desperate.
Intelligence officer Garrett Downing is on the hunt for military goods that have gone missing. Instead, he finds himself coming to the aid of a young woman with more resourcefulness than common sense.
Isabelle has no choice but to accept a stranger’s help in getting home. Once there, however, as enemies turn into lovers, it soon becomes a game of keeping secrets. Garrett is more than he seems. Isabelle knows more than she’s willing to admit. Will she choose loyalty to her father over the love of a man who tells lies for a living? 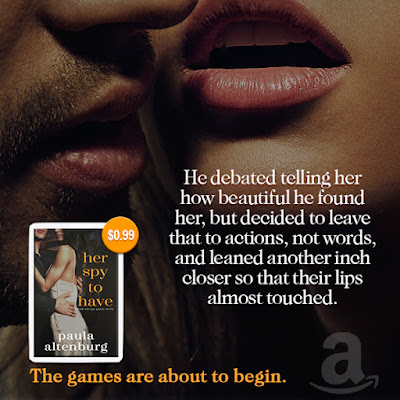 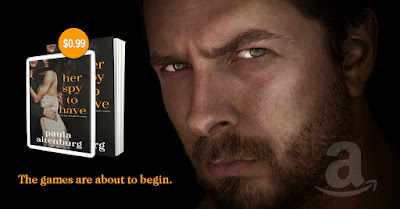 HER SPY TO HAVE Excerpt
Copyright © 2016 Paula Altenburg

The rain continued to pour. The inside of the van became the entire world, and he filled every inch of it. She eased her fingers from beneath his touch.
He hadn’t taken his eyes off her.
“You’ve been avoiding me,” he said.
“And you’ve let me.”
“No,” he corrected her. “I’ve been giving you space. But something happened today. I’d like to know what it was.”
Isabelle’s mouth went dry, her heart hammering so loud she was certain he must hear it over the steady drumming of the rain. She’d made her decision. Now she had to live with it. She hadn’t told her father that she believed CSIS was searching for him. She wasn’t telling Garrett anything more than she already had, either. She didn’t want to choose sides between them.
She turned her face away and looked at the streaming driver’s side window so she wouldn’t have to meet his eyes and read the disappointment in them. When she spoke, she was as honest with him as she could be. “I have nothing to tell you.”
He cupped her chin in firm fingers and forced her to look at him. His expression was grave, but he’d shut down his thoughts so she couldn’t read them. The creases around his mouth, so evident when he smiled, had smoothed. He dropped a light kiss on her lips.
“I guess this is it, then,” he said.
She swallowed hard against the painful lump in her throat. She’d known from the beginning there could never be anything of significance between them. She hadn’t expected to fall in love with him.
The rain slowed, then stopped altogether. The sun burst through a break in the clouds. Regret burned at the backs of her eyes. “I wish things could have been different.”
He let go of her and settled back in the passenger seat, six feet of rugged male indifference wrapped in a white Henley shirt and wheat-colored Dockers.
“Put your right foot on the brake, start the engine, and slide the gearshift into drive,” he said. “If you cut the wheels hard to the left, you should be able to pull back onto the road with no problem at all. Stay clear of the shoulder. It’ll be soft.”
Slowly, Isabelle maneuvered the van onto the dirt road. Muddy water from the puddles sprayed off the tires as she stepped on the accelerator. A minute later, they were on pavement again.
“For the record,” Garrett said, staring straight ahead, “I wish things could have been different, too.” 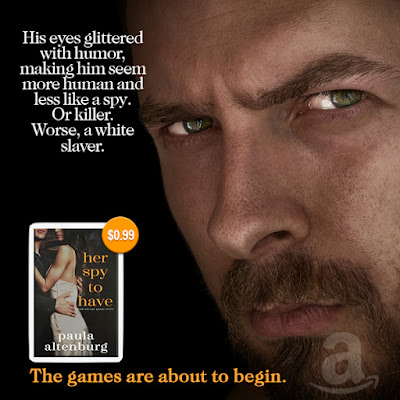 Praise for the Spy Games Series…

“International intrigue, adversaries with more in common than they want to admit, and ohhhh the chemistry…I couldn’t put HER SPY TO HAVE down!”—Samanthe Beck, USA Today Bestselling Author

“I dived into this book and didn’t come up for air until I read that last page on a heartfelt sigh and a smile. It’s awesome and I loved it. Highly recommend.”—Sandy LM, Goodreads

“HER SPY TO HAVE was sexy, emotional, thrilling and just a pleasure to read. I look forward to seeing what Paula Altenburg will write next and I am very excited to read book 2 in this series as soon as I possibly can.”—Jojodeen, Amazon

“Sex, spies and video-tape… if you like your characters hot and your stories smart, don’t miss this great read!” —Roxanne Snopek, USA Today Bestselling Author of The Chocolate Cure on HER SPY TO HOLD

“HIS SPY AT NIGHT by Paula Altenburg is an intriguing and engrossing entry into the author’s spy novel series. Readers will be enthralled by this latest selection.” —Judge, Writer’s Digest 4th Annual Self-Published e-Book Awards

“HER SPY AT DAWN is both the perfect wrap-up to Altenburg's Spy Games series, AND the kick-off to a new spinoff I can't wait to get my hands on. —Amazon Reviewer


Other Books in the Spy Games Series

About Paula Altenburg
Multi-published author Paula Altenburg grew up in rural Nova Scotia knowing that at some point in her life she was likely to be a fiction writer. Swapping Louis L’Amour and Zane Grey books with her father guaranteed she wasn’t going to be the next Jane Austen, much to the dismay of her English teacher mother. A degree in Social Anthropology from the University of King’s College and Dalhousie University in Halifax, Nova Scotia, confirmed that writing was the most logical career path for her.

She’s worked in the Aerospace and Defense industry, which surprises everyone who knows her. She writes because she can’t keep a secret, and getting to pass everything off as fiction makes a good compromise. Happily married, with two terrific sons, she continues to live in rural Nova Scotia but makes a point of traveling as much as she can.
Connect with Paula: Website | Facebook | Twitter | Amazon | Goodreads | BookBub |