Carolyn will be awarding a paperback copy of In the Line of Duty valid in US, Canada and UK to a randomly drawn winner via rafflecopter during the tour. Please visit GoddessFish.com to follow the tour, remember the more you comment better your chances on winning.

Series Information
Murder. Investigation. The pursuit of justice. Do you love trying to figure out whodunit? How about investigating alongside police detectives from the crime scene to the forensics lab and everywhere in between? Do you love a strong female lead? Then I invite you to meet Detective Madison Knight as she solves murders with her male partner, utilizing good old-fashioned investigative work aided by modern technology.

Read in any order or follow the series from the beginning: Ties That Bind, Justified, Sacrifice, Found Innocent, Just Cause, Deadly Impulse, In the Line of Duty, Life Sentence (Bonus Prequel). 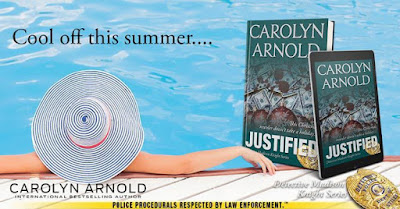 Detective Madison Knight should have ignored her phone when it rang on Christmas Eve. Now she is spending her holiday dealing with her least favorite thing: a bloody murder scene.

Claire Reeves had it all—looks, sex appeal, and business savvy. But it seems that one of those things has caught up with her. Now, Madison and her partner are digging through the victim’s personal life, but the more they dig, the more people they find who had motive to kill her.

All the while, Madison is battling with a touch of the holiday blues, and the man she’s dating isn’t making things any easier. With the status of their relationship up in the air, it’s affecting her focus on the investigation. And if that wasn’t enough, tack on being the only female detective in the Major Crimes division and reporting to a sergeant who thinks less of her because she is a woman. Not that he’d say so in as many words.

But despite the odds, Madison is determined to prove herself by finding Claire’s killer and, more importantly, making sure justice is served.

THE COFFEE CAME UP INTO the back of her throat, and Madison Knight swallowed hard, forcing the acidic bile back down. This was a messy crime scene, the kind she did her best to avoid. She knew Weir, the first officer on the scene, was speaking, but the words weren’t making it through. Despite her revulsion, her eyes were frozen on what was before her.

The victim lay on a crimson blanket of death, wearing nothing but a lacy camisole. The blood pool reached around her body in an approximate two-foot circumference. The blood had coagulated, resulting in a curdled, pudding-like consistency. The kitchen floor was a porous ceramic, and the blood had found its way to the grout lines and seeped through it like veins. Arterial spray had splattered the backsplash like the work of an abstract painter who had fanned a loaded brush against the canvas.

Cynthia Baxter was hunched close to the body taking photos and collecting shards of glass that
were in the blood. She was the head of the forensics lab, but her job also required time in the field. She looked up at Madison, nodded a hello, and offered a small smile. Madison knew her well enough as a friend outside of work that the facial expression was sincere, but the scene had dampened it from reaching her eyes.

Weir stood back at the doorway that was between the front living room and the kitchen. “Such a shame, especially on Christmas Eve.”

Terry Grant, Madison’s partner, braced his hands above his holster and exhaled a jagged deep breath.

“What’s her name and background?” Madison asked Weir with her eyes on the victim.

“The vic is Claire Reeves, forty-three. Lived here alone. No record of restraining orders or anything out of the ordinary. Nothing noted as her place of employment. Her maid, Allison Minard, found her. She’s over at the neighbor’s. Officer Higgins is over there with her.”

Madison managed to break eye contact from the body, glanced at Terry, and settled her gaze on Weir. His words came through as though out of context.

“Detective Knight?” Judging by the softness in his tone of voice, Weir must have read her reaction to the scene. His eyes inquired if she was okay, but the silent probing would have been squashed by the wall she had erected. He continued. “The maid’s pretty shaken up.”

Madison could understand that. She had experience in processing murder scenes, and she could barely handle this one. She did her best to keep eye contact with the officer, but her fear, her distaste for blood, kept pulling her attention to the dead woman.

Claire Reeves. That was her name before she had been reduced to this. To be killed in this manner pointed toward an emotional assailant. Her lack of clothing was an indication that she likely had an intimate relationship with her killer.

Madison scanned the room. There was no sign of a struggle, no overturned chairs or broken dishes. The only thing standing out was a tea towel bunched on the floor in front of the stove as if it had slipped off the front bar. “Any evidence of forced entry?”

“She let her killer in.” Madison’s gaze returned to the victim.

She was someone’s daughter, someone’s best friend, someone’s lover. Normally Madison didn’t have an issue with separating herself from crime scenes and keeping them impersonal. Maybe it had something to do with all that blood and the fact that Claire had been murdered just before Christmas.

CAROLYN ARNOLD is an international bestselling and award-winning author, as well as a speaker, teacher, and inspirational mentor. She has four continuing fiction series—Detective Madison Knight, Brandon Fisher FBI, McKinley Mysteries, and Matthew Connor Adventures—and has written nearly thirty books. Her genre diversity offers her readers everything from cozy to hard-boiled mysteries, and thrillers to action adventures.
Both her female detective and FBI profiler series have been praised by those in law enforcement as being accurate and entertaining, leading her to adopt the trademark: POLICE PROCEDURALS RESPECTED BY LAW ENFORCEMENT™.
Carolyn was born in a small town and enjoys spending time outdoors, but she also loves the lights of a big city. Grounded by her roots and lifted by her dreams, her overactive imagination insists that she tell her stories. Her intention is to touch the hearts of millions with her books, to entertain, inspire, and empower.
She currently lives just west of Toronto with her husband and beagle and is a member of Crime Writers of Canada.
Connect with CAROLYN ARNOLD Online:
Website - http://carolynarnold.net/
Twitter - https://twitter.com/Carolyn_Arnold
Facebook - https://www.facebook.com/AuthorCarolynArnold
And don’t forget to sign up for her newsletter for up-to-date information on release and special offers at http://carolynarnold.net/newsletters.