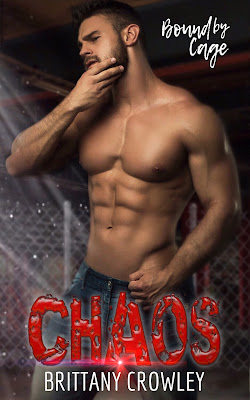 Rules of Play for Bagging and Banging

1. No clingers
2. No repeats
3. No innocents
4. No complications

Should be easy right? So why the f*** am I looking at the cult babe like a starving man and she's a succulent prime rib?

Georgie's everything I've ever avoided, all wrapped up in a sexy little package that plays havoc with my di... er, boyish ways.

She's innocent and clearly needs help, she's always around and god help me, just the thought of dirtying her good girl image has Little Jay at full salute.

But I can't stay away, even when I have to run to her rescue and bring out the chaos. Guess I've been whipped like my brothers, but in my case, I make it look good.

If Jayden's going down... for the first time it'll be in the name of love. 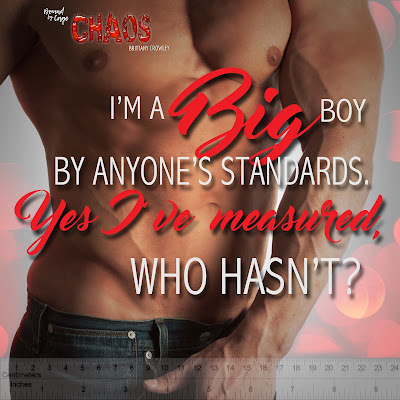 Tell us about Chaos.

Chaos is the third installment in my Bound by Cage Series. This book is focused around Jayden Cage and Georgie McNamara. He's the fun loving, say it like you mean it Cage brother and she's the mysterious sister to Ashlyn nobody knew existed. Let's just say she gets herself into quite some trouble and Jayden has to save her ass.

What initially inspired you to write Chaos?

The first two books Caged and Rampage. Jayden's made appearances in both and he was well received by the readers. I was so nervous to write his book because he's a fan favorite, but I loved every second of getting into his head.

Tell us little about the characters in Chaos.

Georgie is Ashlyn’s (main character in Rampage) sister. They haven't known each other long and she came from a horrible upbringing. She's sweet and naive having been raised in a cult.

Jayden is Josh’s (main character in Rampage) twin. He's highly inappropriate and always down for a good time.

Of course the original gang makes plenty of appearances as well.

Trying to write Georgie surprisingly. With my first two books Savvy and Ash were strong independent characters. Georgie lived a sheltered life so I had to make sure she came across naive without being over the top.

I don't want to give anything away, but the singing bar scene was my fave. You'll know when you read it. The song in that chapter I was completely obsessed with and couldn't wait to get it in the book. I was so happy with how it came out.

What are your future project(s)?
My 4th book in the series Reckless, two books i'm currently working on outside the series and a super secret project people will find out about soon.

Is there anything else you would like to tell the readers about this book/series?
This series means everything to me. But I have to say Chaos has been my favorite to write. Jayden has a special place in my heart. How can he not dig himself in there?! 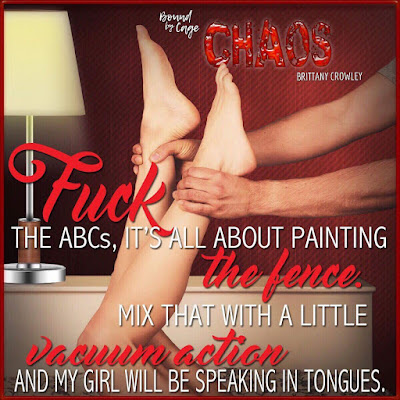 “I fucking sang to her! And I can sing, I have a great voice.” I puff out my chest.

“Says every fucking person who hears me bro.”

“Whatever, all I’m saying is if you feel the need to be with Georgie, make sure it’s more than just getting her underneath you. She’s my sister in law.”

“Ahem, future sister in law, and I don’t just plan on getting her underneath me. She’ll be on top, against the wall, the hood of my SUV, against the shower wall…” Josh cuts me off.

“Stop, you know where I stand on this situation. Just…tread lightly. Promise me.”

“I promise twinny. Would it make you feel better if I said she’s different for me? I don’t know what it is, but I have a feeling about her.”

“I don’t want to hear about your dick’s feelings anymore.” Zander sighs.

“No bro, a feeling in my gut. That rarely happens, it must mean something.”

They all look at me in shock and it’s starting to make me feel uncomfortable. It’s not like I’ve never dated anyone before, there was Becky Jones in the third grade. Oh, Becky girl, she was my first kiss. She had it going on with her overalls and pigtails. Those were the days. Writing a stupid little note saying do you like me? Check yes or no. I’m undefeated, no one ever checked no.
© Brittany Crowley 2017

Brittany Crowley was born and raised in Massachusetts. She still lives there today with her husband and 3 kids. Getting into the world of romance after she had her first child, she was hooked. Though she had many ideas in her head, Brittany was unsure if she had what it took to become a writer. A few encouraging words and one writing challenge later, she completed her first book. Now you can find her trying to keep up with her crazy kids and writing any chance she gets.