Ginger Black will be awarding a $10 Amazon/BN GC to a randomly drawn winner via rafflecopter during the tour. Please visit GoddessFish.com to follow the tour, remember the more you comment better your chances on winning. 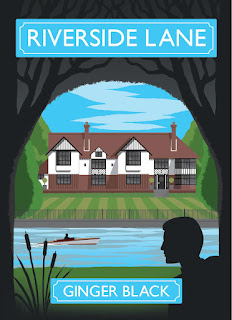 After arranging a house swap with a debonair antiques dealer, a darkly handsome American named Luca Tempesta arrives in a quaint English village. Tempesta, who claims to run a detective agency in Los Angeles, is supposedly on holiday – but the inhabitants of the village are unconvinced.
Yet, as they attempt to solve the mystery of the stranger in their midst, it gradually transpires that there are more than enough secrets to go around in the village itself, harboured by the local MP and his uptight, ambitious wife; the has-been former game show host; the respectable couple with the jailbird son; the hometown journalist, striving for a scoop that will rescue her from debt; and so on. The place is revealed as a labyrinth of deception masquerading as a picture-postcard hamlet; tension begins to mount in between the dinner parties and evenings at the pub, and soon culminates in an unexpected death.
Behind perfect privets and brightly painted front doors, the lives of Riverside Lane’s residents slowly unravel. Tempesta, guarding his secrets with a vengeance, is suddenly threatened with exposure by the elderly religious zealot Ivy Midwinter, whose own past involved keeping professional confidences. When she challenges him in church, she learns that Tempesta will stop at nothing to protect his privacy ...
Set against the exquisite backdrop of a gastronomic village by the Thames, Riverside Lane is a tautly paced page-turner that also gently satirises middle- class English manners: the upstanding denizens of the village watch and whisper behind a mask of English hauteur, whilst their own fragile lives come undone.

Ivy bolted the door behind the journalist. Returning to her desk, she locked the drawer and squeezed her eyes shut. “The blind will see, and those who see will become blind,” she intoned, blinking furiously to dispel the strange dots that had started presenting themselves in her vision. They were becoming more frequent; Ivy knew she should visit an ophthalmologist. She hoped it was not un-Christian, but the thought of being unable to read her beloved sheet music upset her more deeply than any of the memories from her past. The Victorian marble clock, which comforted her hourly with its sweet Handel music, proclaimed that there was just enough time to deliver the cheque to the bank and get back to the Village for Evensong.

Standing at the bus stop with the melodious clock chimes still echoing softly in her head, Ivy caught sight of Luca Tempesta walking through the churchyard. Handel, she thought, had been sent to law school by his father, just like this American. The former had abandoned his studies and blessed mankind with the “Hallelujah” chorus; the latter, according to Ivy’s preliminary investigations, had abandoned his to set up a private-detective firm; then, some years later, he had apparently disappeared from God’s Earth without a trace. Except he had not disappeared. He was here in the Village, living in Clive’s house, next door to Frank, smoking Russian cigarettes. And Ivy Midwinter planned to find out why.

Interview with with the authors:


What was the hardest part of writing this book?
Gaynor Pengelly: The first few pages. Julia and I spent a fair bit of time trying to get the story right from the start but we’ve since learned that it’s better to gallop ahead and write the book and return to those early pages when you have a better understanding of the plot and characters.
Julia Thum: The moving bits! I got very attached to several characters in our novel and I found it hard to get into their heads and write about them feeling lonely, scared and abandoned. Even now, when I read these extracts from Riverside Lane it brings a tear to my eye.

What did you enjoy most about writing this book?
Gaynor Pengelly: Definitely our wonderful bunch of characters. Julia and I had great fun ‘dreaming’ them up with their own unique quirks and foibles. We became genuinely fond of them and talked about them as if they were friends. When we finished Riverside Lane, we genuinely missed them.
Julia Thum: I enjoyed writing the parts that made me laugh out loud. Our novel is a social satire so all the humour in our novel is driven by our observations of the conversations, faux pas and eccentricities of our characters. The English culture, is governed by complex sets of unspoken rules and Byzantine codes of behaviour, that you break at your peril, so we had a lot of fun with that!

What inspired you?
Gaynor Pengelly: My late father, Jim, he always believed I had a novel in my and urged me to put pen to paper. Sadly, he didn’t live long enough to see Riverside Lane published, but I feel his presence and I know that he’s proud of me.
Julia:Thum The lovely village of Bray on the banks of the Thames, where our novel is set. Its famous for the turncoat vicar of Bray in the Middle Ages, the setting for the iconic Hammer House of Horror films in the 1960’s and having more Michelin star restaurants per square foot than anywhere else in the world.

What do your plans for future projects include?
Gaynor Pengelly:  As cozy fiction is our genre, we are setting our next book in the Riverside Lane series in another quintessentially English village. Those who enjoy this type of fiction will know not to be fooled by the genteel surroundings, quiet waters run deep in small communities! I’m also working on a time-travelling, historical adventure for teenagers.
Julia:Thum We’re currently working on the next in the Riverside Lane series, which is set in Cookham, a Thameside village most famous for being the setting for The Wind in the Willows and home to the artist Stanley Spencer and the eponymous gallery showing his work. When I’m not working with Gaynor, I write children’s fiction as well as reviewing children’s books and blogging about story writing in general.
Do you ever get writer’s Block? Any tips on how to get through the dreaded writer’s block?
Gaynor Pengelly:  I read recently that staring into empty space and daydreaming can boost creativity, so I make a point of doing a lot of that! (Apparently being bored allows lateral thinking which assists with problem solving). I’m more likely to get writers block if I’m at home looking at the cobwebs that need removing from my ceiling and the many demands of my family, so I take myself off to a nearby café and find that the ambient buzz of conversation is just the right novel of noise to boost my creativity. I also try to write first thing in the morning, when strong visual images are still lingering in my mind and I’m at my sharpest.


Julia:Thum: I find writing in the garden is a great antidote for writers’ block. Usually ensconced in a blanket and four coats if its chilly, a pot of Earl Grey tea and very dark chocolate by my side.

Ginger Black is a writing partnership between Gaynor Pengelly and Julia Thum.

Julia left Somerset for London at 16. She founded & ran her own consumer P R agency representing a range of international brands including Braun, Molton Brown, Clairol & Kleenex. After selling the business she trained as a psychotherapist specializing in eating disorders & hosted a phone-in show on Radio Luxembourg.

Julia writes bespoke literature & articles for private clients and visits secondary schools & prisons representing two national charities in providing emotional support to pupils & inmates. A keen kayaker and a passionate cook, she lives in Bray-on-Thames with her husband Nicolas and their four children.

Gaynor has worked as a national newspaper correspondent for more than twenty years, interviewing everyone from the great and the good to extraordinary people in ordinary lives. The rich variety of her subject matter and their circumstances has given her a rare insight into human nature and the challenges many people face.

Gaynor's great loves include sitting in pavement cafes watching the world go by, National Trust and English Heritage and hiking across the windswept Yorkshire moors. She lives in Bray-on-Thames with her husband Jonathan and their son, Freddie James.