Enter below for a chance to win a copy of Lunar City from
Samantha Cross! 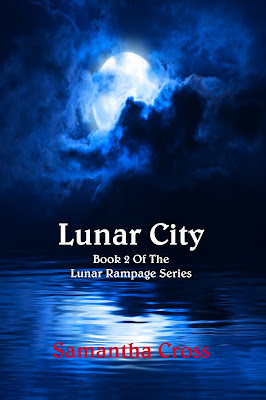 With the town barren after a string of werewolf attacks, Cora has packed up her things and moved back home, hoping to put the violent night of loss behind her for good. But when she returns a year later, just for an afternoon, she is gobsmacked with a new mystery: Max, the man she had fallen for, who was cursed with a life of lycanthropy, is now missing. And when a mysterious man in black arrives at her door looking for him, Cora knows he's in danger.

Her search eventually leads her to a city of the werewolves, and the king of all werewolves himself, who is none too pleased to discover she knows exactly who and what they are. She is forced to live in their compound, with an ultimatum: prove you are trustworthy enough to be freed before the next full moon, or suffer the consequences.

Cora's survival depends on this. Unfortunately, there are those within the compound who are eager to see her fail, and will stop at nothing to succeed.

Q & A with Samantha Cross about Lunar City!

Tell us about Lunar City.


This is a sequel to Lunar Rampage, so you must read the first one! It’s been a year since the incidents in Lunar Rampage, and Cora is trying to get back into contact with Max after he’s been cursed by a werewolf bite. She finds him in a place called Lunar City, where he’s taken refuge with other werewolves that are helping him. Problem is, she’s not supposed to know about any of this, and she’s given till the next full moon to prove she’s trustworthy enough to leave the premises...or else.

This one is a lot more action packed, and laced with MAJOR romance.

What initially inspired you to write Lunar City?

My readers for the first one. I wrote LR with a cliffhanger just in case I wanted to do a sequel, but I never anticipated there’d be such a demand for it. I was getting letters every month asking me when I was going to write it. Just about all my feedback was dying to know what happens to Max and Cora next, so this entry is very love heavy.

Tell us little about the characters Lunar City.

There are A LOT of new characters in this entry. We are introduced to werewolf royalty, and they have a compound where they are taking care of other newbie werewolves. It’s an extremely diverse cast I’m proud of. Not only do I enjoy creating colorful characters, but I wanted them to be racially diverse as well.

What was the hardest part of writing this book?
Realizing that not every book is going to be written so quickly. Lunar Rampage happened over a summer, but Lunar City took a lot longer. It’s a much thicker book, with way more complex storylines and characters, so I wanted to do a good job. It taking longer was just a little frustrating.

Much like LR, I’d have to say the finale. It’s where everything I’ve been building up to sort of explodes. It happens all over a city and...well, I’m going to keep this spoiler free.

I’m writing multiple books right now, so it’s more of a race to see which one gets finished first. I’ve got two romances and one post-apocalyptic. And of course, another entry in the Lunar Rampage series.

“I’m not going anywhere,” he announced.


“Max, you said what you wanted to say, now please leave.”

With both hands in his pockets, he smugly shrugged and responded, “I’m not leaving.”

I had had enough and if he wasn’t going to leave on his own accord I was going to have to force him out by own hand. I swaggered straight up to him and shoved my hands against his chest just to see if I could move him at all. Max’s chest was hard as a rock and I could feel the outline of his pecks beneath his white t-shirt. He had gotten much more defined since we had last seen one another, and because of this, it was like trying to punch a boulder.

Realizing I was physically inferior, I swatted at his chest in frustration and growled, “Get out!” I pushed at him a couple more times and internally I was screaming. I looked like some stupid woman from a black and white film, beating against her lover with her wrists like she was too weak and pathetic to put up a real fight. God, how predictable of me.

In a very bored tone, Max asked, “Are you done?”

Just for asking that I slugged him in the arm. “Screw you,” I said under my breath and then turned away and pouted. I was well aware that I sounded like a child.

“Hey, stop,” he said urgently, and then grabbed a hold of me by my arm and jerked me toward his body before I had a chance to run back to the door. He clasped his hand around mine and then placed it flat onto his chest.
I didn’t know what he was doing, and I attempted to escape, but we were mere inches apart from each other and I was being sucked in by his pale blue eyes that were staring down at me.

“You feel that?” he asked. My eyes mustered up the courage to break away from his gaze and I let myself focus on the fast thudding of his heart beneath my touch. It was racing like crazy. “It’s been beating irregularly since the second I walked in here. Would it do that for anyone I supposedly thought low of?”

Samantha Cross is the author of the international best-selling Lunar Rampage series. She currently resides in a small town in Michigan with her two cats, laptop, and vivid imagination.