Kari will be awarding a digital copy of the book on tour to a randomly drawn winner via rafflecopter during the tour. Please visit GoddessFish.com to follow the tour, remember the more you comment better your chances on winning. 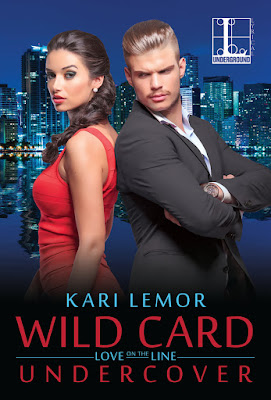 All that glitters in Miami is not gold . . .

Lured in by a bad ex-boyfriend and the moonlight of Miami, Meg O’Hara is trapped in a nightmare situation, waiting tables for a crime boss and fearing for her life. When undercover FBI agent Christopher Shaunessy offers her a way out, she seizes it. Getting the goods on Salazar Moreno might not be easy, but she’ll do anything to be freed from her servitude and Moreno’s sexual advances, even if it means moving in with the charismatic agent.

Chris Shaunessy pretends to be Meg’s lover in order to keep her safe, but he steels his heart against further involvement. Passion has no place in the sordid world of organized crime. And yet, the closer they get to cracking the case, the stronger his feelings for the spirited waitress shine. It’s a dangerous game he’s playing, and taking Meg in his arms for real could prove a fatal misstep . . .

“Sorry,” she mumbled again, looking up. Big mistake. The stranger’s curious eyes captivated her. They were soft and tender and filled with something she could…trust? If she still had any of that left in her. His hands were gentle as they held her. A tiny smile played about the full lips she’d brazenly kissed. She couldn’t believe she’d done it. Her mother would be appalled. But it had worked.

The chlorine scent from the pool faded into the background as sweat and suntan lotion wafted off the man’s damp skin. Her stomach did cartwheels followed by a few back flips. Dangerous.

“Let me go,” she hissed as reality returned. She gave a swift shove at his well-defined pectorals, rushing to get past, to escape from this distraction and the possibility of being caught. Her head whipped around at the sound of a splash and water droplets from behind. Gorgeous was just breaking the surface of the pool. Had she pushed him that hard?

“Oops.” No time for apologies. He looked like the forgiving type. She had to blow this joint before the Pool Nazi came back. Grabbing her fallen sarong, she ran across the deck to hustle inside the luxury hotel.

The manager stood sentry near the front door. A crowd appeared at her back making that way impossible. The stairwell to the left would have to do. She’d go up a few floors then down to the side entrance. She wrapped her sarong around her as she carried out her plan to avoid being seen…and caught.

Meg should stop coming here to use the pool: this proved it. Sneaking in was adding to her already hellish life but swimming always helped work out the stress and the pool here was more accessible than any other on the strip. Pretending she had money to stay in a place like this, rubbing elbows with all the beautiful people, yeah, that got her through too. She’d learned the best times to come and not be seen. Well, for the most part. It was well worth the risk to get away from her dump of a room and its enchanting neighborhood. She’d leave this all behind her soon. She kept telling herself that. Had to believe it for her own sanity.

Footsteps behind her pushed those thoughts away. Her bare feet padded silently along the lushly carpeted hallway. Heart racing, she ducked into the ice machine alcove, her sigh echoing in the silence. She glanced down. Her bag? She must have dropped it as she rushed off. How had she not realized? It couldn’t have been the threat of being arrested. Or the crooked smile of the handsome stranger she’d kissed. The one with the kind eyes and gentle hands. No, she couldn’t allow herself to be led astray by a pretty face. Not again.

She continued down the hall, her trip cut short when someone grabbed her by the arm and spun her around.
~~~~~~~~~~~~~

Kari Lemor was one of those children who read with a flashlight under the covers. Once she discovered her mom’s stash of romance novels, there was no other genre to even consider. For years, she had stories stewing in her mind, stories of love and happily ever after. But writing wasn’t something she ever liked in school. Of course, no one ever asked her to write a story about a couple falling in love. Now that her children are grown, she can concentrate on penning tales of dashing heroes who ride to the rescue and feisty heroines who have already saved themselves. Please visit her at karilemor.com and on Twitter and Facebook.