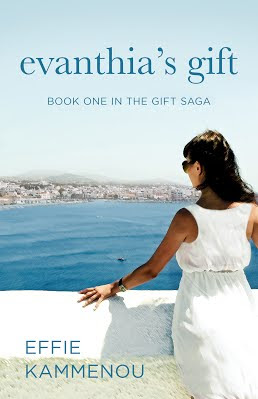 In the year 1956, Anastacia Fotopoulos finds herself pregnant and betrayed, fleeing from a bad marriage. With the love and support of her dear friends Stavros and Soula Papadakis, Ana is able to face the challenges of single motherhood. Left with emotional wounds, she resists her growing affection for Alexandros Giannakos, an old acquaintance. But his persistence and unconditional love for Ana and her child is eventually rewarded and his love is returned. In a misguided, but well-intentioned effort to protect the ones they love, both Ana and Alex keep secrets - ones that could threaten the delicate balance of their family.

The story continues in the 1970’s as Dean and Demi Papadakis, and Sophia Giannakos attempt to negotiate between two cultures. Now Greek-American teenagers, Sophia and Dean, who have shared a special connection since childhood, become lovers. Sophia is shattered when Dean rebels against the pressure his father places on him to uphold his Greek heritage and hides his feelings for her. When he pulls away from his family, culture and ultimately his love for her, Sophia is left with no choice but to find a life different from the one she’d hoped for.

Evanthia’s Gift was a beautifully written two generation Greek-American love story, once I started reading it, I hated to put it down. The book starts out with Ana & Alex’s love story, what a wonderful love that was, Alex had loved Ana from the first time he met her in college but never let his feelings known and lost his opportunity when she married another. They meet few years later through a mutual friend and this time he never let the opportunity get away this time. You could just feel how much Alex loved & cherished Ana & her daughter Sophia, who he adopted, he would not stop until Ana trusted & loved him. I could just feel the pain the couple went through early in their marriage, it almost destroyed them but as a couple they love was more powerful than it was before the tragedy. I loved Alex & Ana’s story but to me the best was yet to come with Sophia & Dean’s story.


Sophia & Dean’s love story there was so many ups & downs, when you finally thought yes a big NO came. Dean had always thought of Sophia as another sister along with his own sister. They were always together, with their parents being best friends, more like family, living next door to each other, family functions & Sophia as far as she could remember Dean was always her “Dino” & she always loved him, until one kiss that changed it all.

There was so many times I wanted to go through the book & wring Dean’s neck, shake him until he finally realized what was right in front of him. But eventually, many years later, he did it for me finally opened his eyes and realized what truly mattered in life.

This book took me on an emotional roller coaster, I was laughing, yelling at the characters, and find myself crying. I also loved learning so much Greek history, I myself never knew their was Greek Jews, and the struggles that Greeks had to through to keep their beliefs. If you are looking for a beautiful love story that will take you away on a emotional rollercoaster, that expands over 50 years, I recommend you grab a copy of Evanthia’s Gift today! Effie Kammenou has earned a new fan in this reader & I can not wait to get my hand’s on the next book in the The Gift Saga!


I received a copy for my honest review! 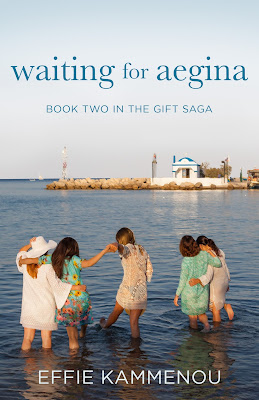 In 1961, five little girls moved into a suburban neighborhood and became inseparable, lifelong friends. They called themselves the ‘Honey Hill Girls,’ named after the street on which they lived. As teenagers they shared one another’s ambitions and dreams, secrets and heartaches. Now, more than thirty years later, they remain devoted and loyal, supporting each other through triumphs and sorrows.

Evanthia's Gift follows the life of Sophia Giannakos. In Waiting for Aegina the saga continues from the perspectives of Sophia and her friends as the story drifts back and forth in time, filling in the gaps as the women grow to adulthood.

Naive teenage ideals are later challenged by harsh realities, as each of their lives takes unexpected turns. Now nearing their fiftieth year, Sophia, Demi, Amy, Mindy and Donna stand together through life-altering obstacles while they try to regain the lighthearted optimism of their youth.

All I can say is WOW! When I thought Effie Kammenou could not take me on another emotional rollercoaster after reading her debut novel Evanthia’s Gift, I was mistakenly wrong! Waiting For Aegina took me on a very emotional rollercoaster ride from the very beginning. Just when you thought everything was going to turn out for the “Honey Hill Girls”, BAM something just brought you to tears. One moment you were in tears and the next you felt all warm inside and BAM another tearful moment.


Waiting for Aegina is a continuation of Evanthia’s Gift, it picks up after Dean and Sophia’s wedding after the first chapter. It covers six years of Sophia, Demi, Donna, Mindy and Amy’s lives about their true friendship, always being there if it was only one or all of the girls, each girl was only a phone call away. Each one was going through their own life struggles but was always their when their friend needed them the most, even when on of that friend wasn’t open about it they were so close they knew when one of them need to step up for them. I loved the continuation of Sophia & Dean’s romance it was a delight to watch their love & commitment continue. And Demi never changes she tells it like it is doesn’t hold back, I love all the women but Demi has become my favorite I see a little of myself in her.

I received a free copy in for my review!

Effie Kammenou is a believer that it is never too late to chase your dreams, follow your heart or change your career. She is proof of that. At one time, long ago, she'd thought that, by her age, she would have had an Oscar in her hand after a successful career as an actor. Instead, she worked in the optical field for 40 years and is the proud mother of two accomplished young women.

Her debut novel, Evanthia’s Gift, is a women’s fiction multigenerational love story and family saga, influenced by her Greek heritage, and the many real life accounts that have been passed down. She continues to pick her father’s brain for stories of his family’s life in Lesvos, Greece, and their journey to America. Her interview with him was published in a nationally circulated magazine.

Evanthia’s Gift: Book One in The Gift Saga was a 2016 award finalist in the Readers Favorite Awards in the Women’s Fiction category. Waiting for Aegina: Book Two in The Gift Saga is Kammenou’s latest release.

Effie Kammenou is a first generation Greek-American who lives on Long Island with her husband and two daughters. When she’s not writing, or posting recipes on her food blog, cheffieskitchen.wordpress.com, you can find her cooking for her family and friends.

As an avid cook and baker, a skill she learned from watching her Athenian mother, she incorporated traditional Greek family recipes throughout the books.

She holds a Bachelor’s Degree in Theater Arts from Hofstra University.

Landing page for both books –