Ryshia will be awarding a $20 Amazon or B/N GC to a randomly drawn winner via rafflecopter during the tour.Please visit GoddessFish.com to follow the tour, remember the more you comment better your chances on winning. 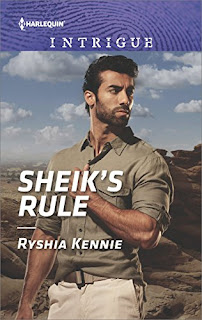 His sister's life is at stake, and despite his wealth and power, Sheik Emir Al-Nassar feels helpless. At least heading his family's security agency provides him with resources to track down her kidnappers. But when the ace profiler he's sent turns out to be K. J.—Kate—Gelinsky, Emir is furious. Finding the kidnappers' desert hideout is dangerous enough without the distraction of a beautiful woman.

But K.J. is unlike any woman he's ever known. Her fearlessness and incisive mind inspires Emir's admiration. And her compassion breaches his guarded heart. Still, rescuing his sister is a perilous mission. And allowing desire to cloud his focus could endanger them all.

Emir nodded as he covered her progress. But suddenly they weren’t alone. The roar of the bike engine bore down on them as it flew over one dune, coming closer, only sixty feet away. He fired at it, kicking up sand and causing the biker to swerve right and away from them. Emir fired again and this time the driver lost control. The bike toppled, skidding on its side as the driver landed on his feet, his rifle in the sand behind him. They needed to get to the jeep and they had a minute or less to do it before he was back on his bike.

Kate fired once, twice, but the angle was wrong—a dune protected him.

“Run!” Emir commanded unnecessarily as they both ran, keeping low and moving fast. They launched themselves into the Jeep.

“Go!” Kate yelled. It was another unnecessary command for he had the accelerator to the floor. The Jeep sped forward, pelting sand behind them as they flew over the dune, swerving back and forth to avoid any shots from the biker.

“We want him alive, if possible,” Emir shouted over the roar of the engine and knew that the odds were slight that that was going to happen, expecially if they both wanted to come out of this alive.

She nodded, and oddly, despite the intensity of the situation, despite the fact that their attention was fixed on their attacker, she turned and smiled at him.

The Canadian prairies are my home and while the prairie landscape is blessed with beautiful blue skies, it also has four seasons that come on full throttle – especially winter and because of that I like to travel. Often on those trips, stories are born.

In 2011 I won my city's writing award, and was the first romance writer to do so since its inception. In 2013 my romantic suspense was a semi-finalist in the Kindle Book Awards. Published in historic romance and paranormal romance as well as romantic suspense, in February 2016, my first novel was published by Harlequin Intrigue.

There’s no lack of places to set a story as my imagination and the too long prairie winters may find me seeking adventure. The memories of those worlds both near and far, the words of a stranger, the furtive look one man gives another, often become the catalyst for a suspenseful story with a deadly villain and an intrepid hero and heroine who must battle for their right to love or even their right to live.

When not dreaming of other stories, I can be found scouting out a garage sale or two, dusting off my roller blades or just thinking about the next adventure that may be miles away or in my own backyard.