Today we are spotlighting Joanne Rock's
Wishes at First Light!

Enter below for a chance at a $10 Amazon GC
from Joanne Rock! 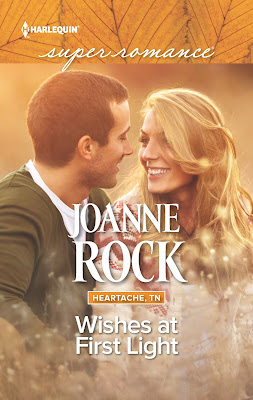 Starting over, one wish at a time…

Gabriella Chance has devoted her life to helping others overcome traumatic events. Now it’s her turn. Gabby’s come home to Heartache, Tennessee, to finally face her past. She finds solace in an unlikely ally, her high school crush, Clayton Travers. But while Clay wants to be Gabby’s refuge, he’s returned to Heartache to confront his own demons. With so many painful secrets in their past, can they hope to wish for a happy future…together?

Q & A with Joanne Rock about Wishes at First Light!

Tell us about WISHES AT FIRST LIGHT.


This book is the fifth story in my Heartache, TN series for Harlequin Superromance. The books stand alone, but I’ve enjoyed continuing the stories of characters who live in this fictional small town south of Nashville. I began the series with Promises Under the Peach Tree, when I introduced Mack Finley and realized he had a large, interesting family who lived in Heartache. Each book has introduced a different character who lives there. In Wishes at First Light, we also get some closure on a criminal that’s been stalking girls in Heartache.

What initially inspired you to write WISHES AT FIRST LIGHT?

I introduced the heroine of Wishes, Gabriella Chance, in book 3, Dances Under the Harvest Moon, and knew I had to write her story! She has a long-time crush on the hero from book 4, Whispers Under a Southern Sky and I knew I had to find the right hero for her. I’m so happy she finds love in Wishes at First Light.

Tell us little about the characters in WISHES AT FIRST LIGHT.

Gabriella Chance was attacked in the woods near her home as a teen when she sneaked out to meet –she thought—a boy she had a crush on. She ran away from home afterward, unable to face the aftermath of the ordeal. Years later, she returns. Stronger and ready to testify against the man who hurt her. She never expected to be reunited with her long ago crush, Clayton Travers.

Clay was a foster teen at the time he met Gabriella and he’s returned to Heartache to meet a half-sister he never knew about, Mia. I wrote a full story for Mia, as well. The Heartache books are unique in that each story contains a full subplot from a teen’s point of view. We get to know a lot about the teens in this town!

I found it tough to reach back into some of my own experiences with sexual harassment to write about what Gabriella and Mia have each gone through. As women, we become experts in deflecting unwanted male attention at an early age, attempting to downplay it and minimize it so that we’re not perceived as “making a big deal about nothing.” This attitude teaches girls to ignore the signs of deeper problems and we need to be aware of it. It’s not okay for men to taunt us, touch us inappropriately, or berate us for spurning unwanted advances. Every woman has had brushes with danger when that kind of encounter got out of hand, and it’s scary to think about the consequences of being in the wrong place at the wrong time with a man who won’t take no for an answer.

I always like writing the romantic endings. I like the optimism of those moments, and in this case, we get to see the whole town of Heartache in an optimistic place. After what the town has endured in the last few books, it was awesome to give them a reason to celebrate and to return to one of my favorite settings—the town square—where so much has happened for my Heartache characters.

I’m looking forward to the start of a new series called The McNeill Magnates for Harlequin Desire. The first book, The Magnate’s Mail-Order Bride, releases April 4th, and kicks off a trilogy. Then, next winter, I’m adding three more titles to The McNeills, so there will be lots to learn about this new family full of secrets and scandals!

I’d love to share the list of books in this series in case anyone wants to hunt down more stories!

Promises Under the Peach Tree

Nights Under the Tennessee Stars

Dances Under the Harvest Moon

Thank you so much for having me!

Now an exciting excerpt from Wishes at First Light!

… Maybe she’d find healing here during this trial after all. If she wasn’t called to take the stand, she would benefit from being here when her attacker was convicted. And she’d promised herself she would speak to Clayton privately in the hope that confiding in him about the role he’d unknowingly played in that night would ease some of her old phobias about men and sex. It had taken her a long time to lose her virginity after that night, and her counselor had explained that her brain had associated sensual feelings with pain. She’d been too young to have positive sensual feelings prior to that awful night.
Although she’d successfully had sex—nice, normal, not painful sex even if it wasn’t anything to write home about—she still dealt with a strange and sickening mental cross-wiring of the sensual and the terrifying. If clearing the air with Clayton had any chance of helping her to heal fully, it was worth the embarrassment of wading through those old chats to untwine his real messages from the ones her stalker had sent.
Making quick work of her goodbyes, she edged through the salon door and out into the empty street. She’d parked a few doors down and by now, the only cars out here belonged to the women who’d attended the salon night. So it wasn’t like she worried about walking that short distance alone in the dark.
There were streetlights and she’d gotten over those old fears about strange men launching themselves at her from dark corners just beyond her peripheral vision. Truly, she had. It’s just that she was back in Tennessee. And she’d been talking about Jeremy Covington. And Clayton.
Gulping in deep swallows of night air, she hoped some yoga breathing would settle her pulse rate. Maybe she should see if Clayton was still awake. It would be easy enough to spot his bike in front of one of the motel cabins.
She reached for her car door, pausing long enough to look up at the stars overhead in the cold night. A streak of light flashed through the sky almost as soon as she tipped her head back. A shooting star.
She made a wish on it without thought. Wishing for the first thing that came to mind.
Opening her eyes, she had to laugh. She could have wished for healing herself. Or a good trial outcome. Peace of mind for all the great women she’d visited with tonight.
Instead, she’d wished for a single, uncomplicated kiss from Clayton Travers.
--Wishes at First Light, 2017

Four-time RITA nominee Joanne Rock has never met a romance sub-genre she didn't like. The author of over eighty books enjoys writing a wide range of stories, most recently focusing on sexy contemporaries and small town family sagas. An optimist by nature and perpetual seeker of silver linings, Joanne finds romance fits her life outlook perfectly--love is worth fighting for. A frequent speaker at regional and national writing conferences she enjoys giving back to the writing community that nurtured and inspired her early career. She has a Masters degree in Literature from the University of Louisville but credits her fiction writing skills to her intensive study with friend and fellow author Catherine Mann. When she's not writing, Joanne enjoys travel, especially to see her favorite sports teams play with her former sports editor husband and three athletic-minded sons. http://joannerock.com