Book Blast w/Giveaway: It Started With A Kiss by Ella Quinn

It Started With a Kiss
by Ella Quinn
GENRE: Historical Romance

Ella will be awarding an Autographed ARC of IT STARTED WITH A KISS (US Only) to 5 randomly drawn winners via rafflecopter during the tour. Please visit GoddessFish.com to follow the tour, remember the more you comment better your chances on winning. 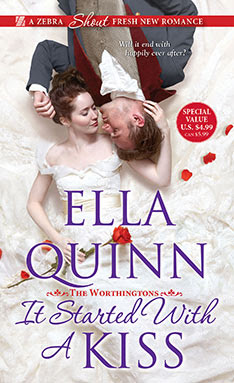 What is a young Worthington woman to do when the man of her dreams is not who she thinks he is?

This season, all eyes are on the Earl of Worthington’s spirited, beautiful sister, Lady Louisa Vivers. Many gentlemen are vying for her attention in and around the ton. Yet, Louisa longs for someone who can take her beyond the ballroom—a man who is worldly, adventurous, and passionate. She won’t settle for just any suitor. She wants her true soul mate—and she’ll know him when she sees him.

Is Gideon, the Duke of Rothwell, him? The moment he and Louisa meet, they share a powerful attraction. Rides at sunrise and waltzes at dusk follow. Finally, Gideon can no longer resist the urge to embrace her, and Louisa is sure he will ask for her hand. But Gideon believes he is in no position to marry. The Rothwell estate has gone bankrupt, a scandal simmers in its wake, and he has nothing left to offer. Now, he must decide if he will let pride stand in the way of true love—or if he will risk everything, and let the lady decide for herself…

“Measles?” Lady Louisa Vivers exclaimed. “All three of them?”

Excited to tell someone about the gentleman she’d seen in the Park, she had gone directly to the parlor she shared with her friend and new sister, Lady Charlotte Carpenter.

Just before the Season began in earnest, Matt Worthington, Louisa’s brother, had married Lady Grace Carpenter. Grace had guardianship of her seven brothers and sisters. The marriage had given Louisa a total of ten brothers and sisters, including her own three sisters, not including Grace. Sometime this coming winter, the number of children would increase to twelve with the arrival of Matt and Grace’s first child. The girls were ecstatic to be aunts. Even the boys were excited.

However, as Louisa opened her mouth to speak, Charlotte told her of the doctor’s diagnosis. Obviously, that news took precedence over Louisa’s.

“Yes,” Charlotte replied. “Theo, Mary, and Philip. According to Cousin Jane and the information your mama left for Grace, the others, including Grace and Matt, have already had them.”

“Will that put off Grace and Matt’s trip to Worthington?” The addition of so many family members meant that not only Worthington House but the Worthington main estate as well must undergo extensive renovations in order to accommodate everyone. In fact, the only one of her brothers and sisters not residing at present in the Carpenter town home, Stanwood House, was Charlie, Earl of Stanwood, who was at Eton. Even Louisa’s mother and her new husband, Richard, Viscount Wolverton, would stay at Stanwood House for the rest of the Season while Worthington House was being renovated. Well, after they returned from their wedding trip to Richard’s estate in Kent, of course. Fortunately, the two houses were directly across Berkeley Square from each other.

“I think they must go,” Charlotte said. Sitting at the desk, she tapped the feather end of the quill against her cheek. “Renovations must be started in the schoolroom there if we are all going to reside at your family’s estate after the Season.”

Louisa and her sister were almost halfway through their first Season. This new development certainly complicated things.

Chewing her bottom lip, she began to mentally adjust her plans to account for the new development. “Hmm, I suppose we should write notes excusing ourselves from the entertainments we had planned to attend.” She glanced at the writing table. “What a bother. Why did the children have to choose now to fall ill?”

Charlotte let out a peal of laughter, lightening the mood. “That is almost exactly what Matt said.”