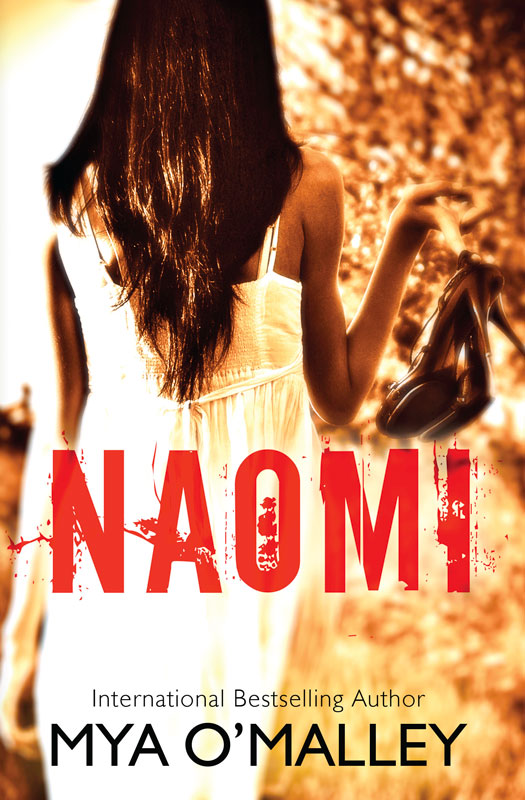 
Naomi has a knack for attracting attention from ethereal beings—whether she wants it or not. Newly engaged to her sexy neighbor, Bryce, she has little time to celebrate and plan for her upcoming wedding, because no sooner does she wrap up a heartbreaking cold case than she finds herself right back where she started, searching for answers alongside ghostly spirits.
This time, however, Naomi learns that things are not what they seem as a man from her past quickly becomes her worst nightmare. If she’s not careful, this man might crush her hopes and dreams forever as he proves to be her most difficult opponent yet.
Still, Naomi tries to focus on her relationship with Bryce. Can it withstand head games and cruel intentions? Naomi makes it her mission to keep Bryce and his daughter safe from harm, but will true love be tough enough to withstand her adversaries?
Naomi must keep her eyes wide open and question everything— and everyone—in order to survive. 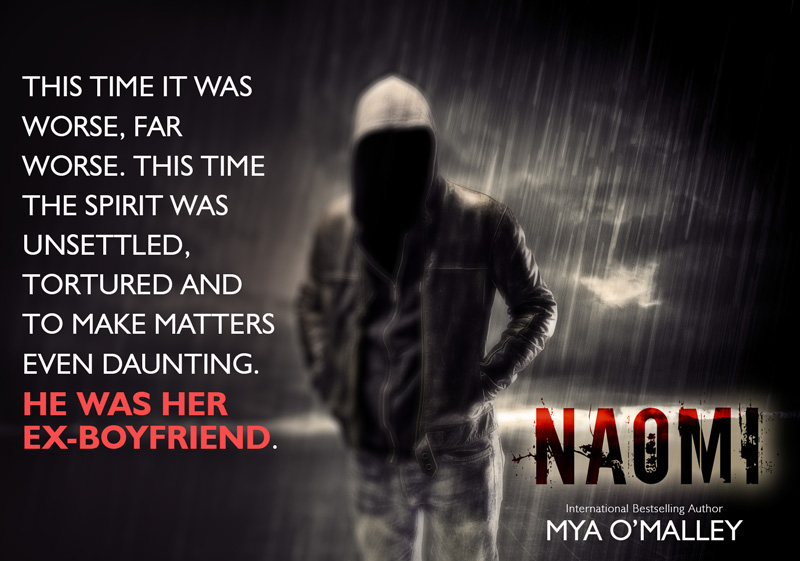 She sensed it before she heard the news. She could feel it deep in her bones. All night long she had tossed and turned, unable to find sleep.

Nick.
“No,” Naomi wailed into her pillow, pounding her fists.
No. But, of course, she knew it was true. After all, she had a sixth sense about things such as this. Damn, Nick. Why? How?
It had been several months since she had taken in his disheveled form, those cowardly eyes scanning her face, pleading for forgiveness from the other side of the depressing, stained, plastic divider at the county jail.
Forgiveness that was difficult to give, although she had been working on it. Too late, Nick. It’s way too late for you now. Part of Naomi’s heart ached for Nick’s troubled soul. For the troubled child he had once been.
Another part turned cold as she conjured up his face in her mind. As she had woken from a fitful night’s sleep, the image of Nick crying out, lost in the empty dark place where challenged souls lacked peace and closure, was too overwhelming to dismiss as a bad dream.
“Bryce.” Naomi spoke his name aloud, even though her fiancé was most likely sound asleep at his house just up the dirt road.
She needed Bryce.
But Naomi knew Bryce would have to wait. Right after her first cup of coffee, she would have to call Officer Marty to confirm the facts of what she already knew to be true.
How had it happened? Possibilities swirled through her mind. Endless scenarios came forth. It could be anything. Nick had been doing time for his part in the cover-up of Maggie Field’s death. Prisons could be dangerous, particularly for someone like Nick, a man who struggled to keep his emotions in check and often had difficulty conforming to the rules.
One with a dark, menacing presence.
One with attitude.
Memories of the not so distant past slammed Naomi. Images of Ryan and Maggie . . .
Maggie.
The ghost that had all but consumed her. Maggie had reached out to Naomi, demanding peace. Naomi admitted to herself that she had become obsessed at that time in her life. Preoccupied with putting both Maggie and Ryan to rest. Luckily, Bryce was loyal and patient to the core during the first hectic months of their new relationship.
What would he say now, knowing that a spirit was back? Knowing that this time it wasn’t the sweet spirit of a girl named Maggie or a quirky, kindhearted man that needed her help?
This time it was worse, far worse.
This time the spirit was unsettled, tortured—and to make matters even more daunting . . .
He was her ex-boyfriend.
Would Bryce be as understanding about Nick as he had been with Maggie and Ryan? Hopping up out of her bed to make her cup of coffee, Naomi figured she was about to find out.


***
Moments after she hung up the phone with her friend, Officer Miriam Marty, Naomi reached for her coffee mug but then placed it back on the counter with a gentle thud.
Damn, Nick.
Miriam had confirmed Naomi’s worst suspicions and provided the bare facts surrounding Nick’s death.
He was, indeed, dead. But the strange thing about it was that it appeared to have been intentional on his part. It was too early to say, but Miriam suspected that traces of drugs would be found in his system.
An overdose? Could he have intentionally taken his own life? No, that didn’t sound right. Then again, how well did Naomi even know Nick anymore? For that matter, how well had she ever known him? Naomi supposed it was easy enough for an inmate to have the means to obtain drugs. And, let’s face it, prison life could be grueling.
No, no. Something didn’t feel right about this. Nick’s sentence was only to last just a few more weeks, why would he purposely harm himself? As Naomi tried to make sense of the news, she paced the floor. Zelda, her loyal feline companion, weaved in and out of her legs as Naomi stopped and grabbed her coffee mug from the table.
Sharp rapping on the door startled Naomi, causing her to spill her coffee on her blouse. “Shoot!”
Voicing her own displeasure at nearly being stepped on, Zelda screeched as she tore into the living room. Naomi snatched a napkin, wiping at her top as she made her way to the door.
“Are you ready?” Bryce raised an eyebrow as Naomi stepped to the side to allow him through the front door. He leaned over and placed a quick kiss on her forehead.
“Ready?”
“Ah, yes. Remember? We were going to grab a bite and then head over to the trail for a walk?”
Yes. That’s right. She and Bryce had plans this morning. With everything going on, she had clearly forgotten.
“I . . . I’m so sorry. Give me a minute to change my shirt. Sit, I’ll be right back.” She scurried up the stairs to her bedroom to change. This could be a good thing, the time alone with Bryce. His young daughter, Holly, was in school, and she could have Bryce’s full attention.
Dressed in a clean shirt, Naomi sprinted down the stairs and grabbed her sneakers. She attempted her best smile as she tied the laces. “Almost ready,” Naomi managed.
“What’s with you? Why are you out of breath?” Bryce cocked his head as he studied Naomi.
“Just excited to spend the morning with you,” she offered a bit too cheerily, glancing up at him as she felt nagging guilt rise in her throat. He wouldn’t be happy about the news regarding Nick, and that was putting it mildly. He simply couldn’t even begin to understand. He would tell her to leave it alone, not to get caught up in somebody else’s problems.
Naomi swallowed hard and gripped Bryce’s warm hand as they made their way to his truck. Once inside, Naomi glanced at her fiancé and then gazed down at her lap.
“Bryce?” she whispered.
Concern etched his handsome face. “What is it? What’s wrong?” He reached for her hands.
“We need to talk.” 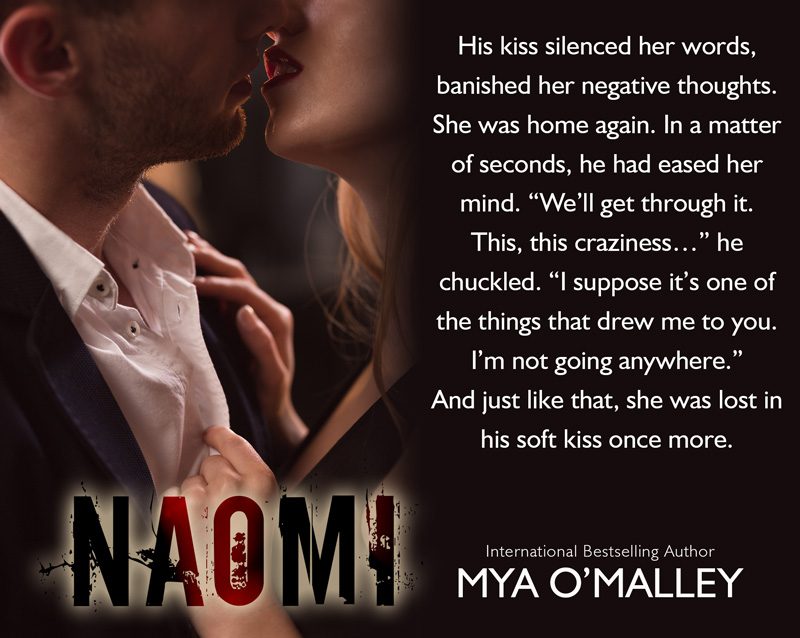 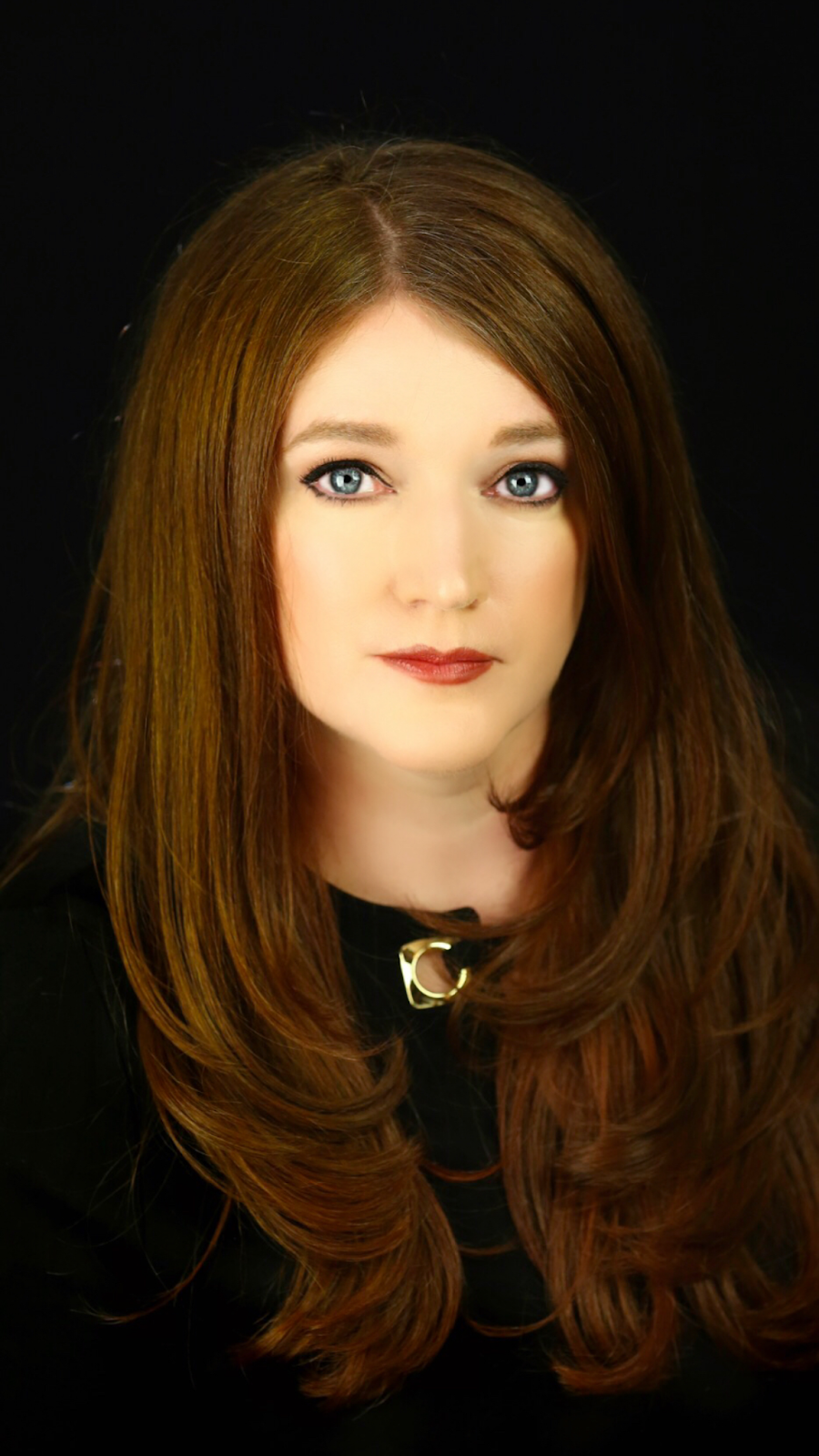 
Mya O’Malley was born and raised in the suburbs of New York City, where she currently lives with her husband, daughter and three step-daughters. The family also consists of two boxers; Destiny and Dolce and a ragdoll cat named Colby. Mya earned an undergraduate degree in special education and a graduate degree in reading and literacy. She works as a special education teacher and enjoys making a difference in the lives of her students.
Mya’s passion is writing; she has been creating stories and poetry since she was a child. Mya spends her free time reading just about anything she can get her hands on. She is a romantic at heart and loves to create stories with unforgettable characters. Mya likes to travel; she has visited several Caribbean Islands, Mexico and Costa Rica. Mya is currently working on her tenth novel. 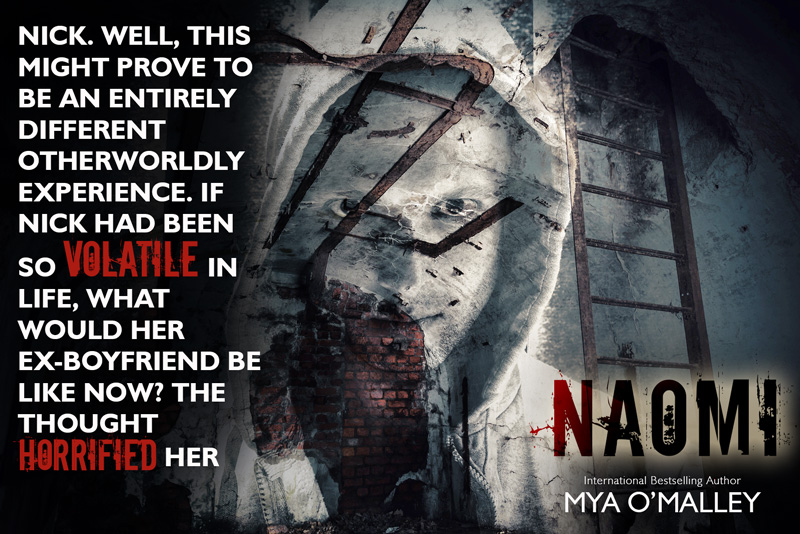