Blurb Blitz w/Giveaway: A Bend In The Willow by Susan Clayton-Goldner

A Bend In The Willow
by Susan Clayton-Goldner
GENRE: Women's Fiction

Susan Clayton-Goldner will be awarding a $50 Amazon or Barnes and Noble GC to a randomly drawn winner via rafflecopter during the tour. Please visit GoddessFish.com to follow the tour, remember the more you comment better your chances on winning. 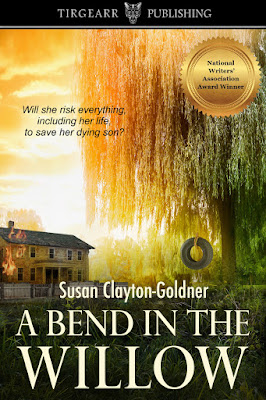 Willowood, Kentucky 1965 - Robin Lee Carter sets a fire that kills her rapist, then disappears. She reinvents herself and is living a respectable life as Catherine Henry, married to a medical school dean in Tucson, Arizona. In 1985, when their 5-year-old son, Michael, is diagnosed with a chemotherapy-resistant leukemia, Catherine must return to Willowood, face her family and the 19-year-old son, a product of her rape, she gave up for adoption. She knows her return will lead to a murder charge, but Michael needs a bone marrow transplant. Will she find forgiveness, and is she willing to lose everything, including her life, to save her dying son?

Catherine Henry told her husband, Ben, many stories about her past, and to her ever-deepening shame, not one of them was true. Though she longed to tell him who she really was, where she’d come from and what she’d done to escape, with each passing year the truth grew more difficult to tell. And that made her a liar, something she’d never intended to become.

Anxious to finish their son’s party preparations, she bent over the kitchen counter, putting the final touches on a sheet cake of a glitzy cowboy on a rearing horse. To the beat of Tina Turner belting out What’s Love Got To Do With It?, Catherine set tiny balls of silver candy in the frosting bridle and reins, the pointed tips of chocolate spurs on tapered boot heels. When the garage door rumbled open, she readjusted the volume, then checked her progress against the sketch she’d drawn on a piece of drafting paper.

Ben breezed in, his cowboy boots clicking against the Saltillo tile floor. He wore a gray three-piece pinstriped suit with a cream-colored Stetson that made him look as distinguished as a Texas senator.

Pumpkin, their twelve-year-old cat the color of orange marmalade, ran into the kitchen and circled Ben’s legs. He reached down to rub the cat’s ears, then pulled a treat from his pocket and tossed it onto the floor. Pumpkin chased after the dime-sized nugget, batting it around with his front paws for a few seconds before devouring it.

Ben hung his hat on one of the horseshoe hooks beside the door. He eyed the cake, then dropped his briefcase on the barstool. “Does our son have any idea how awesome his mother is?” Ben stood behind her, parted her hair and kissed the nape of her neck. “And while you designed this masterpiece, guess what I got invited to do.”

She turned and smiled. “Texas Two Step at the governor’s mansion?”

He laughed, looking her straight in the eyes like he always did when they talked. “Give a presentation on admissions and diversity to the American Association of Medical Colleges. It will get my name out there, put me in a better position to become a dean.”

She raised her eyebrows, impressed. “You go, cowboy. But you do know your butt looks much sexier in jeans. Are wives invited?”

“Absolutely. Next spring. Cherry blossoms on Pennsylvania Avenue.” He pulled her against him. The top of her head fit perfectly under his chin. She nuzzled her face in his shoulder and breathed in the familiar scent of Irish Spring soap. That a man like Ben could love her never ceased to fill her with amazement and a silent anxiety he might discover who she really was and disappear.

Susan Clayton-Goldner was born in New Castle, Delaware and grew up with four brothers along the banks of the Delaware River. She is a graduate of the University of Arizona's Creative Writing Program and has been writing most of her life. Her novels have been finalists for The Hemingway Award, the Heeken Foundation Fellowship, the Writers Foundation and the Publishing On-line Contest. Susan won the National Writers' Association Novel Award twice for unpublished novels and her poetry was nominated for a Pushcart Prize.
Her work has appeared in numerous literary journals and anthologies including Animals as Teachers and Healers, published by Ballantine Books, Our Mothers/Ourselves, by the Greenwood Publishing Group, The Hawaii Pacific Review-Best of a Decade, and New Millennium Writings. A collection of her poems, A Question of Mortality was released in 2014 by Wellstone Press. Prior to writing full time, Susan worked as the Director of Corporate Relations for University Medical Center in Tucson, Arizona.

Susan shares a life in Grants Pass, Oregon with her husband, Andreas, her fictional characters, and more books than one person could count.