Fight For Her
by
Vanessa Vale 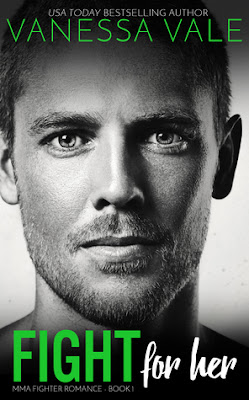 A fighter ready to give up the gloves.

A woman ready to take on the world.

Grayson Green's an MMA champion who's spent years in the limelight where fast times and fast women were easy to come by. The appeal is gone and he steps out of the ring to make some changes and get control of his life. All the training in the world can't save him from the one-two punch of meeting Emory. She's different. She has no idea who he is…and she wants him anyway. When someone from his past is prepared to take him down... and Emory along with him, he'll do anything to fight for her...

Warning! This book has a super protective, super hot alpha male who will stop at nothing to protect his girl.

This book was previously published under the title Naked Choke. Besides a new cover and title, new scenes have been added.

Grey & Vanessa meet at a friend’s engagement party when Grey comes to Vanessa’s rescue when a man wanted her attention but she didn’t want to give it to him. Vanessa is insecure & naive due to an unfaithful ex. But Grey changes all that with just his sexy caring voice & he isn’t willing to walk away from her, she is the first woman who doesn’t want him just because he is a former MMA fighter, heck she didn’t even know who he was or what he did for living and he truly enjoyed that.

You could feel the chemistry come off Grey & Vanessa from the first glance at each other across the room and it just got even hotter as the story went. It was refreshing to actually watch their relationship blossom even after a week and they didn’t just jump in bed. The only wished the suspense part was drawn out a little bit more than it was but besides that I truly enjoyed this book.