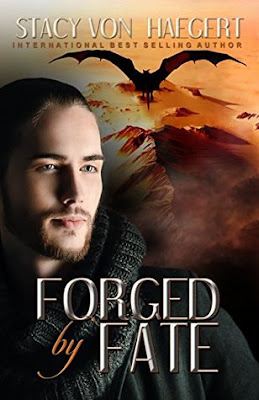 As the younger brother to the King of Angels, Stefen Von Emmerich had spent his life resenting his royal obligations and doing the exact opposite of what was expected of him. However, all that 'couldn't-give-a-damn' attitude was hurled right out of his well-guarded window the day he had the misfortune of being killed...

After being turned into a Vampire, Stefen finds more than his mere existence to be altered. Now a Fallen, a hybrid with his maker's famed Dragon blood coursing through his veins, Stefen must rediscover himself and his newly awakening powers.

When he is sent on a mission back to Hell, the place of his death, he discovers much more than what he bargained for. A child was left behind as a result of the battle that forever changed him. A victim of the war between the realms. Another hybrid, like him.

Compelled by reasons beyond his own understanding, Stefen strikes a deal to help the innocent child. As she grows into a beautiful young woman, the more intertwined their two lives become and the more perilous their unique paths grow.

It's not long before an old oracle's words from years ago begin to ring true..."Fate holds the cards. Time reveals the hand."

Can I say wow, fantastic story. Angeles, Vampires, Demons hybrids, lots of action, intrigue, misery, war, the old and true about battle versus good.
I started the book and was immediately drawn into the story, and page after page, it drew me in further and further. That Earth became as my home, the fights the feeling in the book became mine.
The characters were awesome. The younger brother of the King of Angels, Stefen Von Emmerich , spent his years avoiding his duties. Having been turned into a Vampire he found he existence had changed. He was now a Fallen, a hybrid with his maker's Dragon blood running through his veins. He now must find himself and come to understand the power that are awakening in him.
Sent to Hell on a mission, the same place where he died. A child had been left behind after the battle that changed him forever. She is a hybrid like him.
Striking a deal to protect the child, which is beyond his own understanding. As she grows into a beautiful woman their lives become even more entwined.
It's not long before an old oracle's words from years ago begin to ring true..."Fate holds the cards. Time reveals the hand."
A story well writen, love it and can't wait to read the next one, for that character is very intriguing.