Review Tour w/Giveaway: An Unwilling Suspect by Jo A. Hiestand

An Unwilling Suspect
by Jo A. Hiestand
GENRE: British mystery

Jo A. Hiestand will be awarding a $30 Amazon/BN GC to a randomly drawn winner via rafflecopter during the tour. Please visit GoddessFish.com to follow the tour, remember the more you comment better your chances on winning. 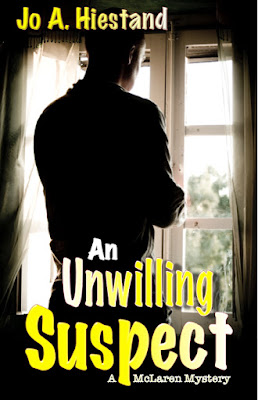 McLaren’s fiancée tragically died one month ago. Trying to heal emotionally from her death, McLaren settles into a rented farmhouse in the woods near picturesque Lake Windermere, in Cumbria. But he’s barely had a chance to rest when Helen, the woman in the neighboring cottage, is killed…and is discovered near his front door.
Because McLaren had spent much of the previous day with her, and his snowy footprints lead to and from her house, he becomes the prime murder suspect in what the police label a frustrated romantic advance.

Motives for Helen’s murder are as chilling as the outdoor temperature. There’s the hands-on garage mechanic who’d like to put his hands all over her, the affluent fishing guide, and Helen’s former boyfriend who wanted to renew the relationship.

Can McLaren find the killer before the police jail him for murder?

The acrid smell of smoke woke him. He lay in bed, trying to understand what was happening. As the significance of the odor occurred to him, he threw back the duvet and got up quickly.

He forgot that he’d looked up a few things last night. He must have fallen asleep without putting away the laptop, for it flipped off the top of the bed and crashed onto the floor. “Damn.” He bent over and picked it up. The top dangled, gripping the keyboard by its left edge. McLaren punched the power button but nothing happened. The screen stayed black. He tossed the laptop onto the bed and quickly slipped into his jeans and shoes as the odor intensified.

He ran into the front room. Fingers of light gray smoke threaded through the air and he coughed, but he saw no other sign of fire. He checked the back room, kitchen and second bedroom, but encountered nothing more than smoke. As he dashed back into the front, he glanced outside. The land was on fire.

McLaren tragically lost someone who mattered to him, now trying to heal he finds himself in a rented farmhouse near Lake Windermere , in Cumbria. But so far no much rest has come his way, he meets his neighbor Helen who lives in cottage near where he is staying. But the troubles just started as she is found murdered not too far from his place, and he becomes the prime suspect as they find his snowy footprints that lead from her hour.There’s the hands-on garage mechanic who’d like to put his hands all over her, the affluent fishing guide, and Helen’s former boyfriend who wanted to renew the relationship. McLaren now need to find the guilty party before the local police jail him for her murder, will he be able to do so. You will have to read to find out. Good story and a bit drawn out, but well worth the read.I receieved a free copy for my honest review!Review by Jara 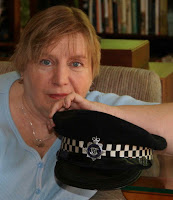 A month-long trip to England during her college years introduced Jo to the joys of Things British. Since then, she has been lured back nearly a dozen times, and lived there during her professional folk singing stint. This intimate knowledge of Britain forms the backbone of both the Taylor & Graham mysteries and the McLaren cold case mystery series.

Jo’s insistence for accuracy, from police methods and location layout to the general feel of the area, has driven her innumerable times to Derbyshire for research. These explorations and conferences with police friends provide the detail filling the books.

In 1999 Jo returned to Webster University to major in English. She graduated in 2001 with a BA degree and departmental honors.