The author will be awarding autographed copy of PURR M FOR MURDER (hardcover - US ONLY)to a randomly drawn winner via rafflecopter during the tour. Please visit GoddessFish.com to follow the tour, remember the more you comment better your chances on winning. 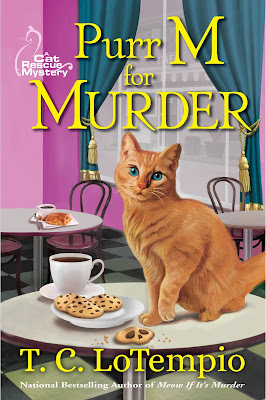 Sydney McCall left behind an ex-fiancé and a New York advertising job to return home to Deer Park, North Carolina and help her sister, Kat, run the local animal shelter, Friendly Paws. Determined to save the shelter from financial trouble, Sydney and Kat organize a cat café fundraising event at a local coffee shop. Things are looking up until their landlord, Trowbridge Littleton, threatens to shut down the event. When Sydney drops by his art gallery to make peace, she finds Kat--along with Littleton's dead body.

Local homicide detective Will Worthington--who just happens to be Sydney's old high school crush--is highly suspicious of the sisters' involvement. Desperate to clear their names from the suspect list, Sydney pounces on the investigation. With the help of one of the shelter cats, a savvy orange tabby named Toby, Sydney begins poking her nose into other local businesses whose owners may have benefited from Littleton's death--until the killer notices she's pawing a little too closely at the truth.

Will glanced up. “Pretty observant of you, Syd. The ME will determine the cause of death.” He tapped on his notebook with the edge of his pen. “Why don’t you walk me through what happened. How did the two of you come to be in Littleton’s shop so early?”

“We had something we wanted to discuss with Mr. Littleton, and we thought the earlier the better,” I said.

“I see. And just what was the nature of this discussion?”

I shifted my weight to my other foot. “Friendly Paws has teamed with Dayna’s Treats & Sweets for a cat café event to benefit the shelter. For a nominal fee, people can have their coffee and goodies in a room with shelter cats that are available for adoption.”

Will glanced up, and I could see a light of interest in his eyes. “I’ve heard of those cafes. They’re mostly in Europe.”

“There are a few in the States, big cities mostly. This will be the first event of it’s kind in North Carolina. We’re hoping to increase revenue for both the café and the shelter.”

“Let me guess. That idea didn’t sit well with Littleton?”

Kat and I both shook our heads in unison and Kat exclaimed, “I should say not! He was in the shop yesterday, and he made his feelings pretty darn clear. He thought having the cats around would be detrimental to business. Heck, he thinks-thought-the shelter in general was a detriment to the town.”

“A sentiment you two didn’t agree with,” he said slowly.

“I should say not!” Kat returned, her cheeks starting to flame. “Syd and I tried to reason with him yesterday but he dind’t want to hear it.”

“And that’s why you decided to come here this morning?”

I nodded. “Yes. I put together a pretty good argument of pros for the event. I was hoping to appeal to his sense of business acumen.”

“Why did you feel this was necessary? Had he threatened you?”

“Not in so many words,” I said carefully. “But he did say yesterday that he was determined to put a stop to the proceedings, and we hadn’t heard the last from him.”

“Um-hm.” Will murmured, scribbling some more.

“And Leila Addams – do you remember her, Will? She’s a reporter for the Deer Park Herald now,” Kat chimed in. “Leila said that she thought Littleton was inquiring about starting a petition against showing the shelter cats – and the shelter in general.”

Will made another notation in his book. “So when was the last time you saw Littleton?”

“Yesterday around one-thirty.” I cleared my throat. “If that’s all the questions you have, we need to get going.”

He snapped his notebook shut. “You’re free to go for now,” he said, “but I will probably need to talk to you some more later on.”

The corners of Will’s lips twitched slightly. “Good to know.”

Once we were back out on the street, Kat hauled off and punched me in the arm – hard.

“For thinking that you could come here and face Littleton without me, for one,” Kat said. “I knew you had your fingers crossed last night.”

I rubbed at my arm. “Can’t put anything over on you, can I?”

She gave me a shrewd look. “So, how did it feel, seeing Will Worthington again after all these years! I heard he was back in town, but I had no idea he’d become a detective – homicide, no less.” She cut me a sidelong glance. “Funny, isn’t it, how you two came back to Deer Park almost at the same time. Like Karma, or something.”

“Well, I’d rather deal with Will than his partner, Colombo Junior,” I said. “Come on, let’s get my car and get to the shelter. I hope Maggie isn’t too worried.”

We walked through the alleyway and when we were almost at the spot where I’d parked, I suddenly stopped short. “Hey,” Kat cried as she ran full tilt into my back. “What’s wrong?”

I pointed to the empty space beside my car. “There was a white Lincoln there when I came, parked pretty badly. The license plate read TLITTLE. I thought for sure it was Littleton’s car, but if it’s gone…”

“A white Lincoln? That’s his wife Petra’s car,” Kat said. She glanced around, then pointed to the gym. “She must have parked it here instead of the gym parking lot, like she usually does. I wonder why.”

Another disturbing thought occurred to me as I slid behind the wheel. It would have been impossible for Littleton’s wife not to have seen the ambulance and police cars parked in front of her husband’s shop. Why hadn’t she come to see what was wrong?

Unless, of course…she didn’t have to. Because she already knew.

While Toni Lotempio does not commit – or solve – murders in real life, she has no trouble doing it on paper. Her lifelong love of mysteries began early on when she was introduced to her first Nancy Drew mystery at age 10 – The Secret in the Old Attic. She (and ROCCO, albeit he’s uncredited) pen the Nick and Nora mystery series from Berkley Prime Crime – the first volume, MEOW IF ITS MURDER, debuted Dec. 2, 2014. Followed by #2, CLAWS FOR ALARM. #3, CRIME AND CATNIP, is out this December. She, Rocco and Maxx make their home in Clifton, New Jersey, just twenty minutes from the Big Apple – New York. Catch up with them at www.tclotempio.com and www.catsbooksmorecats.blogspot.com.