Dakota Trace will be awarding a Kindle Fire (U.S. only) to a randomly drawn winner via rafflecopter during the tour. Please visit GoddessFish.com to follow the tour, remember the more you comment better your chances on winning. 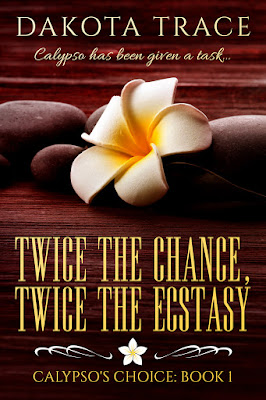 Calypso has been given a task… Divorcee, Eryka Demonte, wants to find the sexual gratification that had been lacking in her marriage. So she’s willing to try anything, including signing up to meet two potential lovers at what used to be an abandoned resort in West Caicos. Now run by the reclusive Ms. Calypso, Club Ecstasy Caicos boasts of the most lavish accommodations and sinful temptations. Eyrka just prays the resort’s owner knows her business, because Eryka’s in desperate need of someone with the right touch. Business partners and lovers, Luca Reed and Dre Bennet are anxious to celebrate their upcoming anniversary. Together for nearly twenty years, they want something special…and naughty. Dre thinks he’s found it when he receives a mysterious email from a Ms. Calypso. She’s preparing to open her newest exotic resort and would like them to come and test out the amenities. Eager for a tropical vacation complete with a beautiful woman, both men agree, never expecting they’ve been set up by a matching making Goddess with an agenda of her own.

After kicking off her battered tennis shoes, Eyrka slipped out of her jeans and stained t-shirt while the shower heated. That’s when she noticed it. Sitting on the bathroom counter was a lone frangipani bloom that hovered over a folded piece of ivory stationary. Intrigued, she shifted the vase holding the creamy white flower with the buttercup center off to the side. Using a fingernail, she pealed back the embossed seal holding the stock card shut. In an elegant, feminine scrawl, was a message from Ms. Calypso.

Please take advantage of all the amenities, my darling Eryka. While we have a limited staff, Luis will be available for you anytime night or day. The men I’ve handpicked for your fantasy will arrive later today – so perhaps an hour or two at our in-house spa will help get you ready for your intimate encounter.

“Personalized service indeed.” The last thing Eryka had expected was on-hand touch from the elusive resort owner, despite the woman’s promise in the acceptance email she’d received. “And she’s the second person to recommend the spa. Perhaps I should.” Leaning in to get one last sniff of the fragrant bloom, she sighed. “After my shower.”

Hi, I'm Dakota, an author of erotic romance (think 50 Shades of Gray - but better) and paranormal erotica. What exactly does that mean? Well, since I've always marched to the beat of different drum: it means that I get to take my unique life experiences - like putting around in the garage with my dad, or driving a train when I was ten, to create worlds where the heroines aren't necessarily June Clever, but are strong independent women who may stand on their own two feet, but long to submit to the right man.  Whether it's two friends who realize there is more than friendship between them or the sexy alien who captures his unwilling slave's heart, sparks are sure to fly! My imagination has no bounds or at least none I've found yet!
I’ve been writing professionally since 2008, but when I’m not clacking away at the keyboard, you an find me putting around the garden, out on the marching band field or cooking up something yummy in the kitchen for my kiddos.