Cailin Briste will be awarding a $10 Amazon or Barnes and Noble GCto a randomly drawn winner via rafflecopter during the tour. Please visit GoddessFish.com to follow the tour, remember the more you comment better your chances on winning. 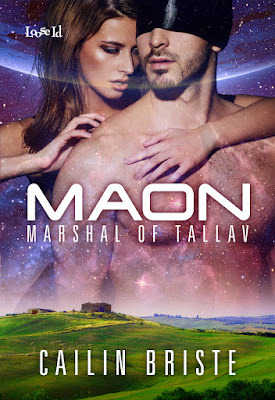 Maon Keefe has always been told he’s doomed to fail as a husband. He decides never to marry instead focusing on living life as a player and becoming a capable marshal of Tallav. When he is shot and the most-wanted criminal he’s escorting escapes, he fears that his career, his one success in life, is doomed. Assigned to ferret out the cause of missing shipments for a VIP aristocrat, he meets Selina Shirley CEO of the House of Shirley. He finds himself inexplicably attracted to her despite her frumpy appearance. When he meets a hooded and masked, scorching hot Domme, Lasair, at his friend’s BDSM club, he’s torn between the two women. Both fire his imagination and call to his submissive nature. Either might be the woman to change him into successful husband material. Selina Shirley organizes her life like she organizes her business, taking control of all aspects of each. She’s concluded that she must marry to get an heir and that her future husband must be totally submissive. Mentored by the sector’s most famous sadist, she learns what it takes to be a proper Domme. Then, hidden behind a hood and mask, as Lasair, she meets Maon and her instant attraction to his full submission at the BDSM club leads her to break her own rules and become involved with him. But he’s also the marshal assigned to investigate thefts at her company. When his broad streak of protective alpha male comes into play, it obvious he’s not a 24/7 submissive. To stick to her plan to marry the perfect husband, she must ignore her heart and dump Maon.

Maon fiddled with the glass in his hand. From his perch at the end of the space-station bar where he sat waiting for Shane to meet him, he could observe everyone entering the companionway from the private ship docks on this side of the station. The usual eye candy passed him, rushing to explore as much as they could of the pleasures that awaited them on Beta Tau. Shane was due in on the Adrasteia. Maon didn’t envy Shane much, but the Adrasteia was one sweet little craft.

“Yeah. But no alcohol. Something fruity.”

When the bartender returned with his drink, Maon noticed a Tallavan woman heading his way. He should know her name, but it wasn’t coming to him. Definitely a prude. Wearing some misshapen, baggy sack of a dress. Nice legs, but they’d look better in heels rather than the flats she wore. Shirley. That’s who she was. He’d heard something about her taking over her mother’s fashion house. Fuck’s sake. If that was her sense of style, they’d be out of business soon.

He eyed her when she passed him, and their gazes met for a moment. He acknowledged her with a smirk. The portfolio she carried slipped, and she struggled to keep it from falling, her long sable hair snagging in the strap. Her head remained down while she swept from view. Maon chuckled.

“Are you harassing passersby again?”

“Shane!” Maon stood and grasped his friend’s outstretched hand. “I can’t help being devastatingly good-looking. The bane of my existence. Females dropping at my feet.”

Cailin has been writing fiction for five years and non-fiction for two decades. Her non-fiction work has been published in magazines and in a non-fiction anthology. She’s a member of Romance Writers of America, the RWA Fantasy, Futuristic and Paranormal Chapter, and the RWA Passionate Ink Chapter.
Cailin likes to flip convention on its head, creating a universe in which each planet is a study in different what ifs. What would happen to alpha men on a matriarchal planet where the women are not Dommes in the strictest sense but certainly have the attitude down pat? How would society handle it if girls born on their new planet developed empathic senses? Cailin throws her characters into these settings, heroes and heroines whose kink is a major defining attribute of their personality.