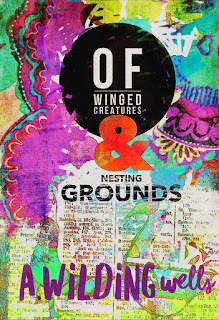 by A. Wilding Wells
Genre: Contemporary Romance
— SYNOPSIS —
Happy
Trapped in a cage…

I was running against time and desperate to conquer my fears with my “don’t forget to be awesome” plan.

One night, I was sulking over my uglier-than-homemade-sin life and reeling from another painful loss. As I thought about my new life, a handsome gent named Hunt Hardick sat next to me. He looked like a good start and was likely a hell of a finish. Suddenly, my plan took on a life of its own.

Hunt
After a long day as one of San Francisco’s most prominent ob/gyns, I stopped at a bar for a bourbon and a mental break from my ex, who I couldn’t seem to bleach from my system. One glance at Happy’s tearstained angelic face and I was done. I’d never been a guy to turn down a stunning woman who also looked like a beautiful project.

Hunt was a key in my locked cage that once opened meant I might fly away.

An emotionally charged, rich with feeling story about survival, triumph, and a girl named Happy Go Lucky who had a plan. A plan that didn’t include the ruggedly sexy gynecologist who inserted himself in her life. 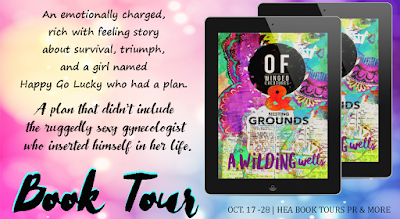 ADD THE BOOK TO GOODREADS 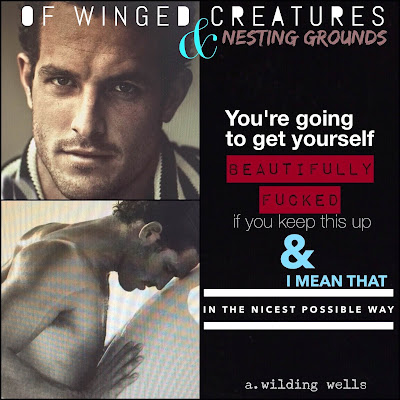 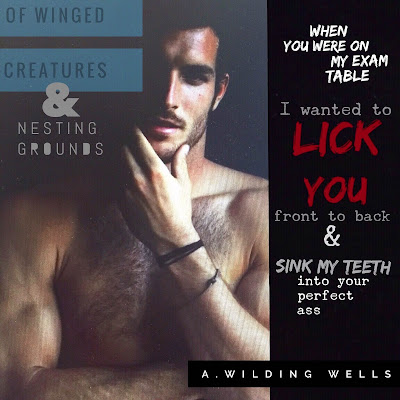 — EXCERPT —
Incapable of resisting a peek for another second, I twist my head to check out Mr. Goodtime. What sort of man has a voice that sounds more decadent than a breakfast of chocolate truffles at midnight?

He leans over the bar, his elbows on the edge, and massages his temples. My god, those hands. I can only imagine the forearms attached to them.

When he angles his head, our eyes meet in a stare. Scrumptious with a side of rough and tumble. Groaning into one palm, I rotate away and lift my glass to my lips, the charred-caramel scent of my drink drifting through my senses. What do I care if Mr. Goodtime can likely tell by my tear-tracked face that my day’s been uglier than homemade sin?

I watch him through wet lashes. “A little blue is all. Thanks.”

“You look like you want someone to talk to.” He searches my face, his tender eyes pools of emerald and concern. Oh, those eyes. Maybe they’re more hazel than emerald-fuck-me-yummy. Whatever, they’re appetizing.

The bartender slides the guy’s bourbon in front of him. And, for the few seconds he’s sipping his drink, I study him after popping a boozy cherry in my mouth. He looks like a take-all-your-worries-away type of gent. Also known as a beautiful distraction. I’m guessing he’s in his early thirties by the gentle smile lines around his eyes. On the bar in front of him is a newspaper with a partially worked crossword puzzle and a fountain pen. And what the hell is he wearing? Threadbare orange jeans and a pea green leather jacket that looks like it was dragged down a bumpy road behind a pickup. A pocket watch and a vest too? What on earth. He’s not steam punk, and he’s not eighty. What is he? Sexy.

And damn, does his wavy golden-brown hair and perfect scruffy stubble make him a possible entry in my journal. He looks like a good start. And I’ll bet he’s a hell of a finish.

He skates his glass along the bar.

I glance down when it clinks mine. After clearing the web in my throat, I mutter, “I’m not much for company tonight.”

“I’m not company. I’m just a guy. You look like you need to tell someone something.” He slides my bobby pin out of my hair and studies the bluebird on it for a few seconds, and a smile forms on one side of his wide lips. He places the bobby pin between his teeth, at the corner of his mouth, and shoves wayward strands of hair behind my ear. Then, after gliding the pin back in place, he says, “There. You’re fixed.”

I choke on a sip of my drink. If only it were that simple. “Yeah. Fixed.”

“You get your heart broken, little bluebird? I can’t imagine anyone doing that to such a gorgeous girl.”

A smirk sits on my pout.

“See there? She smiles.” He nudges my elbow.

I shake my head, and my smirk grows.

“Oh, hell yeah. She shines.” His grin is boyish, but he’s as man as the gender gets.

“You got me, Mr. Goodtime.” I chuckle. “Seriously though, I’m here for booze hugs.”

He leans toward my ear while he digs in his back pocket and pulls a handkerchief out. “Does it love hard and understand you?” he asks softly. “Spill it, shmoop.”

Shmoop? I’ll bet he makes pancakes from scratch and knits slippers for his girlfriend while he’s naked. My stomach flutters when he tucks the cloth in my fisted hand.

“Guys still carry these?” I fondle the soft square. “Do you have superpowers too?”

“Probability manipulation,” he deadpans. “I can cause unlikely things to happen.”

We both laugh, my double snort catching him off guard. He flashes a smirk my way.

After dabbing my eyes, I chase ice around in my glass with one of my markers. “Like making me smile?”

“Captain Compassion,” he says, throwing his arm over the back of my chair as though we know each other.

And it feels like we do. Guess my guard is down. Deception and death can do that to a girl. It can also build your guard sky-scraper tall.

“So, is it a guy?” His tone is gentle and soothing. Tender. He strokes my back, and I surprisingly let him. “Nothing hard liquor can’t solve, huh?”

“Are you going to tell me you’re a hard licker? Now that would be a pick-up line I’ve never heard.” 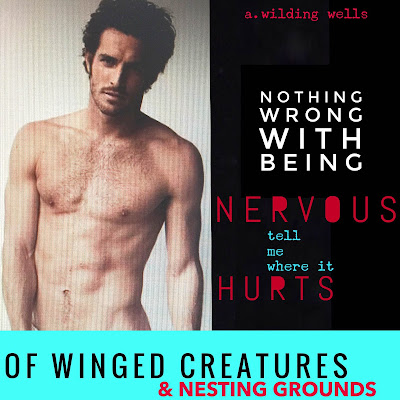 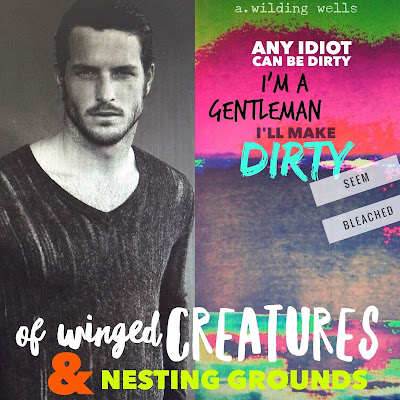 — ABOUT THE AUTHOR: A. WILDING WELLS —
I’m a mother of four sons, a country dweller, a foodie, an animal and nature lover and an entrepreneur. I started my first company when I was twenty-three with my husband and partner, the lovely man I am still married to and work with twenty-four years later. Together we’ve always created. I’ve written several books in other genres under a different name. My first novel is A Mess of Reason and what released in July 2015. My second book, How To Tame Beasts And Other Wild Things, was published in April 2016. A Field Guide To Catching Crickets ​was published June 7, 2016.

ABOUT MY WRITING
I live with my characters day and night. Most of the time I feel like a voyeur in their lives, which magically seem to unfold right in front of me. They’re in my dreams and on my brain non-stop. I’ll spend weeks editing and revising one book with the next plot swimming through my head and being scribbled onto endless reams of paper. When I write I feel everything - and I do mean EVERYTHING - about them. I’m turned on by them. I laugh at and with them. I get pissed at them. I bitch at them. I cry if something awful is happening to them. My heart speeds up when they fight. I get goose bumps because of them.

I’ll admit it sometimes feels a little like I’m playing God when I write (either that or a puppeteer). I love writing about strong characters that have flaws and imperfections to deal with, work on or resolve. I adore twists, turns and funky plot oddities that make life the crazy thing that it really is. I love putting my characters in awkward situations that allow for interesting, heated and often sexy dialogue to play out.