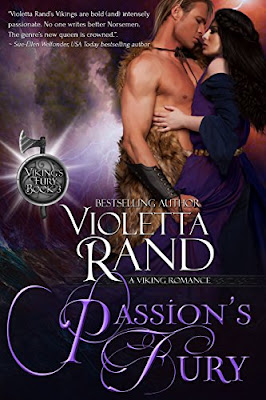 Blurb:
As the only sister of Jarl Roald Blood Axe, Lady Runa is expected to do her duty and choose a husband from among the five noblemen her brother has invited to a feast in her honor. An advantageous marriage means a new alliance for her family.
Runa has other plans though, including a lifelong dream to join the temple maidens where she can serve Odin and the other gods.
Captain Thorolf is the most respected man in Jarl Roald’s personal guard. Tasked with safeguarding the beautiful Lady Runa, he works hard to keep the obstinate girl out of trouble. But every time he thinks she’s ready to accept her fate, Runa finds another way to disobey her brother, which forces Thorolf to cover up her mistakes.
When an uninvited guest shows up at the feast and insults Runa’s family, she immediately takes matters into her own hands and threatens the intruder with a knife. Thorolf responds quickly, but Runa has gone too far. She’s embarrassed the only son of a neighboring jarl.
In retaliation for her bad behavior, Roald gives her an ultimatum. Choose a husband now or he will marry her off to the most decrepit lord in the farthest reaches of Norway he can find.
Under advisement from Captain Thorolf, Runa asks permission to visit the home of one of her suitors so she can get to know him better before she decides if he’s a worthy candidate for marriage.
However, Runa has no intention of marrying anyone. In fact, she’s secretly infatuated with Thorolf. But nothing can ever come of it.
Jarl Roald reluctantly agrees to let her go, but sends Thorolf along as his eyes and ears.
On the road to the north country, Runa’s party is attacked, leaving many dead and Captain Thorolf missing.
Runa escapes the violence and seeks assistance from the high priest at the temple.
Reunited with Captain Thorolf, Runa realizes she can longer hide her feelings for him. What they find is mutual admiration and an attraction that could cost them both dearly.
Will Thorolf risk everything he’s worked so hard to accomplish for the love of a forbidden woman? Will Runa once again defy her brother and take a chance on true love?

Excerpt:
How many people could Runa’s eldest brother, Jarl Roald, squeeze into the great hall at one time? She eyed the double doors in the back of the room, thrown open in the dead of winter to accommodate the guests that had traveled many miles to celebrate the birth of her nephew, Kollvein. Two lines of well-wishers spilled outside. Additional braziers had been set up in the courtyard, providing much needed warmth for their visitors.
“There are an infinite number of joys to experience in this world,” Roald started, his toothy grin, permanent. “But this…” He lowered the fur-swathed bundle in his arms, revealing his newborn son. “Is the greatest of them all.”
Silvia, Runa’s sister-in-law, appeared then. She, too, carried a similar bundle. “Unless you are blessed with two babes,” she added, standing next to Roald. “Eva insisted on introducing your daughter at the same time.”
It made Runa smile, for Roald’s wife had given birth to twins only yesterday—a boy and girl. Her brother wished to keep it a secret, for some would misinterpret twins as a bad omen.
“Meet Katla,” Silvia said, showing off the infant’s perfectly shaped head.
Everyone cheered.
“And who will wear the crown?” someone called from the throng.
“Though my beloved wife is capable of many wonders, she didn’t deliver my son and daughter at the same time,” Roald assured them. “Kollvein kicked his way into the world first, then my sweet daughter arrived.” The jarl gazed at his second child with genuine affection. “When the time comes, rest assured, another generation of Jarl Brandr’s bloodline will sit on the throne.”
“And will you offer these blessed children up for baptism?”
The room fell deathly silent.
Runa pushed her way through the crowd, recognizing the man who spoke. Recently returned from Northumbria, Olvir Olavson had converted to Christianity. All of the Trondelag was abuzz with the news. Anyone who betrayed the gods shouldn’t be here. Kollvein and Katla belonged to Odin.
“Get out,” Runa hissed as she seized Olvir’s arm.
The Norseman gazed at her. “Be quiet, woman. What right do you have to order me about?” He jerked free of her grasp. “This world must change. Otherwise, we will all burn for our sins.” He looked her over, disgust on his face. “Especially a wanton girl like you.”
Refusing to be insulted, Runa unsheathed the knife she kept at her hip. She held it close to his face, unafraid. “Care to curse me again?”

About the Author:
Raised in Corpus Christi, Texas, Violetta Rand spent her childhood reading, writing, and playing soccer. After meeting her husband in New England, they moved to Alaska where she studied environmental science and policy before attending graduate school. Violetta then spent nearly a decade working as a scientist, specializing in soil and water contamination and environmental assessments.
Violetta still lives in Alaska and spends her days writing romance. She enjoys time with her husband, pets, and friends. In her free time, she loves to hike, fish, and ride motorcycles and 4-wheelers.
Connect with Violetta: Website | Facebook | Twitter