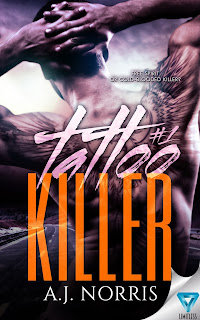 
A tattoo artist and single father, Mikey becomes a suspect in a series of homicides thanks to an anonymous tip from his ex. The case against him seems straightforward, especially since Mikey is connected to the victims, but police detective Harry Hunter knows finding the psychopath isn’t that simple. The physical evidence doesn’t add up. After Mikey is released and amid the turmoil of his life, he meets Grace Bell, a beautiful divorcee, in a chance encounter.

Mikey is everything that straight-laced Grace isn’t…

Grace is tired of living a rigid existence and wants to break free from the routine of her mundane life. The tattoo artist’s free spirit and charm quickly draw her into his world. From the back of his Harley, he teaches her how to let go and have fun, leading to a sizzling passion she never knew existed.

Another woman is found dead, and the killer isn’t finished yet…

Grace is unaware of Mikey’s part in the investigation of the local homicides, but when her estranged father, detective Harry Hunter, finds out who she’s dating, he’s quick to fill her in. Even though he thinks Mikey is innocent, there is a killer in Webster and he’s not stopping until he gets what he wants. Every victim is connected to Mikey, and her father fears Grace will be next.

After Detective Hunter receives a threatening phone call from the killer, he rushes to protect his daughter, but is Grace really the next target of the…
Tattoo Killer? 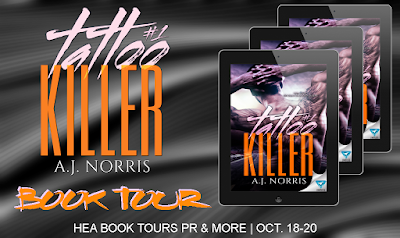 — EXCERPT —
The doorbell to Ink Addiction chimed and Mikey inwardly groaned. He ducked behind the curtain toward the back of the shop. Through a gap he watched Detective Harry Hunter survey the parlor until he spotted the glass top counter and Mandy.
Her bright smile greeted him. “What can we help you with today?”
“Looking for Mikey Hardin. Is he here?”
Please don’t tell him I’m here.
“Yeah, he’s in the back.” She nodded in Mikey’s direction.
Dammit.
“Mike!” she shouted. Her feet padded toward him. “Mike…”
He came out of his hiding spot and nearly ran into her.
Her face flushed. “Oh…this guy is here to see—”
“I heard.”
Mandy returned to her post behind the counter as Hunter joined Mikey back by his work station, a cup of coffee in his hand.
“Hardin, need to have a word with you.”
What now?
“All right.” He waved him over. “We’ll need to make this quick, got another tattoo to do in twenty minutes.”
“This won’t take long. I’ll come right out with it. Do you know a Chelsea Rand?” Hunter scrutinized Mikey’s face.
“No, can’t say I do. Is there a reason you’re asking about her?”
“She was found murdered.”
“Another one? Shit, when?”
Harry sipped his coffee, eyeing Mikey over the rim of the cup. “About a year ago.”
“And you think I had something to do with it?” He pinched the bridge of his nose. “When is this nightmare going to end?” he muttered under his breath.
“What’s that?” Hunter asked.
“Nothing. When did you say she was killed?”
“A year ago. You didn’t know her?”
“That’s what I said.”
“Do you keep records of your customers?”
“Clients. Yes, but names only unless they pay with a credit card. Sometimes emails.”
“You wouldn’t happen to have the list handy or on a computer, would you?”
Mikey walked behind the curtain where he’d tried hiding from the detective. Hunter followed him.
He sat down at a glass top desk with chrome legs and began tapping on the laptop keyboard. He entered the name into the search function of the scheduling program. Chelsea Rand came up, along with her email address used for newsletters with the dates and times of all her appointments. Hunter leaned over his shoulder.
“How come I see her name?” the detective asked. 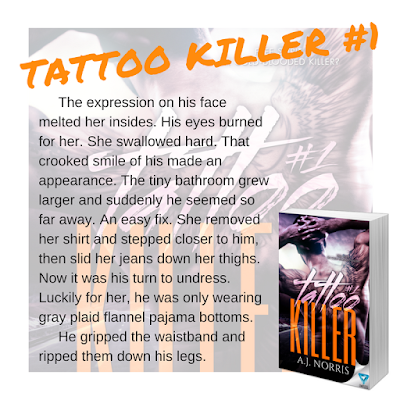 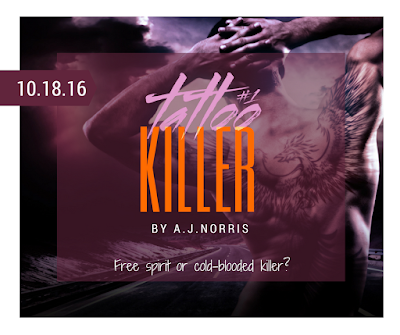 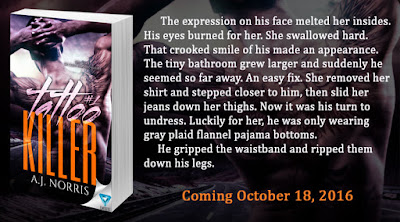 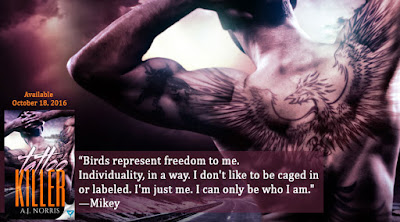 — ABOUT THE AUTHOR —
A.J. Norris is a romantic suspense and paranormal romance novelist. She began writing as a way to dim down the voices inside her head. She enjoys being able to get inside someone else's head, even a fictional one, and see what they see. Watching how her characters deal with difficult situations or squirm with the uncomfortable ones make the hard work of writing all worth it. She is a movie buff, especially book adaptations, loves watching her son play baseball and communing with other writers. She lives with her family who are extremely tolerant (at least most of the time) of all her late nights behind the computer.


— GIVEAWAY —
Enter to WIN 1 of 4 Kindle Copies of TATTOO KILLER
or 1 of 2 $10 Amazon Gift Cards!
a Rafflecopter giveaway