Sharolyn G. Brown will be awarding a $15 Amazon/BN GC to a randomly drawn winner via rafflecopter during the tour.  Please visit GoddessFish.com to follow the tour, remember the more you comment better your chances on winning. 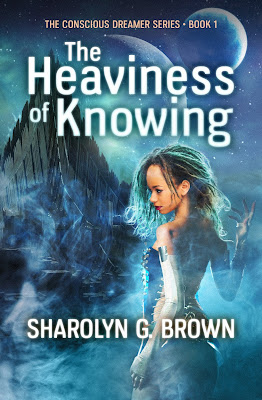 Roxal has spent her life using her Dream Traveler ability in service to Trebor’s gods, The Keepers. Even after she learns they aren’t all powerful like she was taught, she dutifully continues to manipulate an Earth woman named Lauren to do their bidding. Roxal’s content pretending to be a loyal follower, until her mate’s activities with a rebel faction put both of their lives in jeopardy.

Meanwhile on Earth, Lauren is struggling to find balance at work and at home. To make matters worse, she develops an acute case of insomnia which disrupts her life. While trying to cure her condition, Lauren discovers that not only do aliens exist, but that she’s been in contact with one for most of her life. And that’s just for starters.

Now Lauren’s world is turned upside down. And Roxal has to figure out if she can harness the survival instincts which before told her to hide and use it to now fight for her survival.

Now weightless, her body floated out of her makeshift bed into a dark shapeless place. Fog seemed to swirl around her as she drifted in a strange void. A chair would really be nice, she thought.

Then, when she looked to her left, she saw a purple and green chair surrounded by light from an unknown source. The next moment, she was sitting in this chair. Lauren looked around, trying to see where she was, but beyond the mysterious light circle, there was nothing but blackness and fog. As time passed in this place, she heard beeps and voices talking somewhere around her, but couldn’t see the source of either. Now she was afraid.

Should I speak and let them know I’m here? she questioned to herself.

Just as she was about to take her chances with “them,” another voice spoke.

“No, do not let them know you are here.” The voice spoke in a low whisper but was crystal clear.

The speaker sounded as if she was nearby. Lauren didn’t know why, but the voice seemed familiar and felt like she was someone Lauren could trust, so she kept quiet.

“We will both be in trouble if they find you here. It is time for you to go,” the whispering unseen speaker continued.

The sensation of being blown away by a strong wind cut Lauren off mid-sentence. She opened her eyes and found herself staring at her ceiling. Lauren sat up, repositioning herself on the sofa, and looked around the room. She remembered she had come to the den when she saw the bright white numbers on the satellite box’s digital display. A smile spread across her face as she read the time, 3:18 AM. She lay back on the sofa’s cushion, still smiling.

What books/authors have influenced your writing?
Octavia Butler and J.K. Rowling are two authors who have influenced my writing the most. I don’t mean that I try to write like them. But more I try to tell stories like them. Both women have the ability to draw the reader totally into the world of their characters. They also tell stories with a lot of detail, but not so much that you feel you can skip some of it to get to the story.
Both Butler and Rowling are masters at world building. And that’s what I strive for. I want to write characters that seem real and put them in worlds that a reader can close their eyes and see.

Tell us something you hate doing. Why?
I hate washing dishes. My husband and I have a deal where if one person cooks, the other has to do the dishes. And, I think this is more than fair because I don’t exactly love to cook either. But after he cooks, and we have a great meal, when it comes time for me to wash dishes, I just dread it.

I don’t know why I hate washing dishes so much. I think it may have to do with the fact that when I was growing up, we had to wash dishes every night because my Mom cooked dinner. There were six of us in my family. So by the end of the day, it was like every dish in the kitchen had been used. And while my husband and I don’t use nearly as many dishes, I still hate washing dishes.

When you are in writer mode, music or no music? If music, do you have a playlist?
No music when I’m in writer mode. For me, when I write it’s like I’m watching a scene play out in my head, and it’s my job to get that scene down on paper. If I try to write with music on, it interrupts this process. So I write in silence.

Who was your favorite hero/heroine?
My favorite heroine is Wonder Woman. When I was young, there was just something about her. She’s just as tough as the guys, and she wasn’t “girly.” I think that may be why I gravitated to Wonder Woman. I’ve always been a bit of a tomboy, so I liked having a heroine who was one also.

Have you ever had one character you wanted to go one way with but after the book was done the character was totally different?
Yes. My stories are character driven. When I write, I start with an idea of what I want them to be or what I want to have happen to them. But, inevitably, as the story develops, the characters start to develop in ways I hadn’t considered. For example, Roxal is my main alien character in The Heaviness of Knowing. In earlier versions of the novel, she was this naive, unsuspecting person who had no idea about what was happening around her. However, as the story developed this final time I was writing it, I realized, Roxal isn’t naive. She knows exactly what’s going on around her. But, she’s choosing to pretend she doesn’t, because it’s easier for her.

When I realized this, that’s when the title of the novel came to me. At its core, The Heaviness of Knowing is about the responsibility that comes with knowing a truth you’d rather not know. 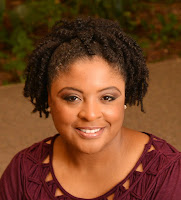 Sharolyn G. Brown is a lifelong science fiction and fantasy fan who decided the best way to deal with all of the characters in her head was to give them stories and put them in a book. She lives with her husband in Houston, Texas where she divides her time between working, writing, and spending time with him.