Blog Tour w/Giveaway: A Player For A Princess by Tia Louise 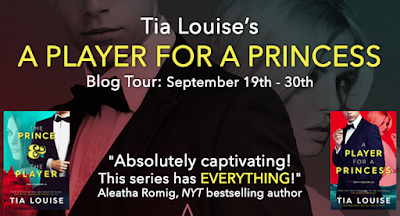 About A PLAYER FOR A PRINCESS

From the Mediterranean to the Caribbean, the game continues…
Zelda Wilder is on the run, this time from the ruthless assassins who’ve decided she knows too much to live.
“Playboy Prince” MacCallum Lockwood Tate isn’t about to let the beautiful player who stole his heart get away—if only he could decide whether he wants to save her or strangle her for her dangerous choices.
After tracking her down to a casino in St. Croix, Cal follows Zee back to Tortola where he intends to keep her safe. One problem: Zelda’s criminal liaisons are two steps ahead of her.
Lives are threatened, and all of the players’ skills are tested in this plot to capture a killer and save a princess.
Cinderella meets Ocean's Eleven in this CONTEMPORARY ROMANCE DUET featuring secrets, lies, royal high jinks, scams and double-crosses; breathless, swooning lust, cocky princes, dominant alpha future-kings, and crafty courtiers, who are not always what they seem.


Grab A PLAYER FOR A PRINCESS now:

Amazon | iBooks | Barnes and Noble | Kobo | ARe
ADD it on Goodreads: http://smarturl.it/PLPgr
LISTEN to the playlist on Spotify: https://goo.gl/lfRGpH
SEE the inspiration board on Pinterest: https://goo.gl/Fyvl58

“You fucking conned me from the start.”

A hot tear hits my cheek—I can’t deny it. I did.

Gripping my face, his rough mouth covers mine, shoving my lips apart. My knees go liquid, but he jerks me up firmly against his chest. Gripping his shoulders, my fingers curl against his hard muscles as his tongue claims mine.

He lifts his head, and our mouths break apart with a gasping smack. My lips throb with the force of it.

“N-no,” I gasp. The fine hairs dusting his chest tease the skin above my bra, and I’m so wet. His large hand slides between my thighs, over those thin boxers. I’m bare underneath, but he’s not invading, he’s teasing. I ache for him so much, I can barely stand it. Still holding my cheeks, he forces me to meet his angry eyes a moment before he kisses me again. Again, it’s hard, passionate, demanding, and all the sensations overwhelm me.

Jerking my head back hazel eyes burn into mine. “Every time you moaned for me, every time you begged… Were you lying then?”

“No!” I cling to him as his hand snakes around to cup my ass through the thin cotton material. “I never saw you coming. Even if I had, I never could have been prepared for you. Not in a million years.”

His eyes narrow slightly, and he places both hands on my cheeks, moving his thumbs over my mouth. The muscle in his jaw moves, and I can see so much anger in his eyes.

“Don’t.” A thumb stills on my lips, stopping my speech.

He slides his thumb over my slightly fuller top lip. His eyes follow his movements, and I remember our night on the boat, him telling me all the things he sees when he looks at me. Just as fast, I remember the way he fucked me that night, the way we were both wild and passionate.

Our eyes meet, and I have no idea what he sees now when he looks at me. I don’t know if the love he felt for me has been snuffed out by the truth of who I am. I don’t know what he’ll do next now that he’s caught me.

I only know as much as I don’t deserve him, he’s my prince. I gave my heart to him, and no matter how far I run, I’ll never stop wanting him.

★★★ Missed Book #1? ★★★ Pick up THE PRINCE & THE PLAYER for just .99c for a limited time!!! “Tons of laughs, sex, and suspense...THE PRINCE & THE PLAYER had me on the edge of my seat, biting my nails, and blushing like crazy!” – Shayna Renee’s Spicy Reads Let the games begin... Runaway Zelda Wilder will do whatever it takes to secure a better life for her and her sister Ava. Crown Prince Rowan Westringham Tate will do whatever it takes to preserve his small country. When Zee is blackmailed into helping a vengeful statesman take down Rowan, she never expects she'll be pulled into a web of lies and international intrigue--much less that she'll find herself falling for Cal, Rowan's "playboy" younger brother. Ava's no help, as she finds quiet walks in the moonlight discussing poetry and leadership with the brooding future king irresistible. Even more irresistible is kissing his luscious lips. They're in over their heads, and the more time passes, the more danger the sisters are in. Shots are fired, and it's soon clear even a prince might not be able to rescue these players.

★ GET The Prince & The Player for .99c for a limited time ★
Amazon US | Barnes and Noble | iBooks | Kobo
Print Copies: Amazon | Createspace
Audiobooks: Amazon | Audible | iTunes

Want to win a $50 Amazon giftcard and an audiobook of THE PRINCE & THE PLAYER? Enter to win via the rafflecopter below! a Rafflecopter giveaway

The “Queen of Hot Romance,” Tia Louise is the Award-Winning, International Bestselling author of the ONE TO HOLD series. From “Readers’ Choice” nominations, to USA Today “Happily Ever After” nods, to winning the 2015 “Favorite Erotica Author” and the 2014 “Lady Boner Award” (LOL!), nothing makes her happier than communicating with fans and weaving new tales into the Alexander-Knight world of stories. A former journalist, Louise lives in the center of the USA with her lovely family and one grumpy cat. There, she dreams up stories she hopes are engaging, hot, and sexy, and that cause readers rethink common public locations...