Today we have the blog tour for An Indecent Longing by Stephanie Julian! We are so excited to share this book. Grab your copy and check out the blog tour! 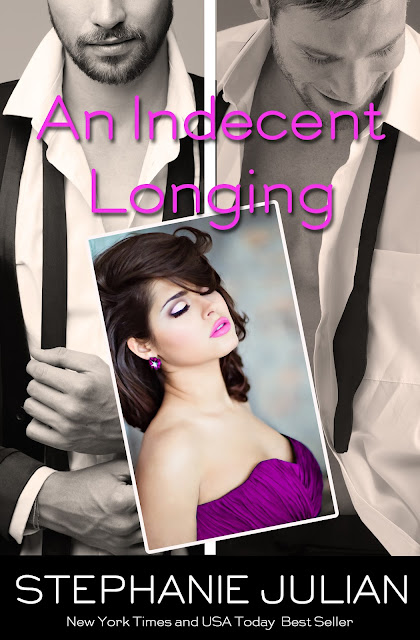 About An Indecent Longing:
Dorrie Haverstick is the one woman Ian Keller wants with a burning passion…and can’t have. Her connection to the man responsible for his father’s death makes her poison. That doesn’t make him want her any less. Dorrie’s life is filled with secrets. Her beloved father runs the Russian crime family in Philadelphia but keeps her existance a secret. To acknowledge her would put her in constant danger and destroy her reputation as a physician. But his money funds her medical practice and she’s the on-call doctor for his men. Decorated vet Ben Shaw knows his cousin Ian’s transition from the shadowy world of black ops into regular life has been difficult. But when he sees Ian’s interest in Dorrie, he sees Ian’s salvation in her eyes. There’s only one problem: Ben falls hard for the quiet, driven Dorrie. Does Ben take Dorrie for himself? Or does he step back and wait for Ian to make his move? Either way, someone's on the outside. Unless they can agree on one indecent solution...
Get Your Copy: Amazon | Barnes & Noble | Kobo | Google Play | IBooks

Damn, now this is a woman I’ll gladly take to bed.

In worn jeans and a faded t-shirt, Dorrie Haverstick made Ben’s dick hard, a fact she’d notice if he didn’t get himself under control.
Sure, the dress she’d had on earlier had made him take a second look but this was the real woman.
Her dark hair hung damp, the shoulder-length waves surprisingly sexy. And she hadn’t reapplied her makeup, which she didn’t need anyway.
She looked much younger and so much less like the polished sophisticate he’d seen at the club.
Was this the woman Ian dreamed about at night? The dreams that kept his cousin awake most nights and made Ian grumpier than a teething toddler the next morning?
Ben had been meaning to ask Ian about his worsening mood but hadn’t found the right time. Ian probably would’ve blown him off anyway.
Since they’d bought into Adam Oleksy’s private security firm six months ago, Ian had thrown himself into his career change with the zeal of a recent religious convert. But now Ben had to wonder if there was something else behind his single-minded focus.
Like maybe he was trying not to think about this woman, who continued to stare at him as if he was an alien from another planet.
“Excuse me?”
The question seemed to escape without her conscious knowledge, as if she had no idea what the hell he’d said. The absolutely baffled look on her face amused the hell out of him.
This brilliant woman had no idea how much he wanted to strip her naked and see how flustered she could get when he put his mouth between her legs.
He was about to open his mouth and flirt like hell when he noticed her eyes. Not as bright or sharp as they’d been earlier. How her lids drooped. The lady was practically asleep on her feet.
“Or maybe you just need to let me buy you a drink. You look like you could use one.”
He figured she’d turn him down immediately. When she didn’t…
Well now. Isn’t that interesting?
Then again, maybe she was just too damn tired to come up with a response.
Then she blinked. “And where would we go for that drink? I’m not exactly dressed to go out in public.”
As she swept her hand down her front, he felt justified in letting his gaze follow her hand.
And realized she wasn’t wearing a bra. Not that she needed one.
Well, fuck. He probably shouldn’t dwell on that fact. But he couldn’t make himself drag his gaze away until he’d had a damn good look.
Probably not a good idea to get your hopes up, asshole. Ian has dibs.
At least, that’s what he suspected.
Too bad, because the longer Ben stared at her, the more he wanted to get to know her.
“Would you like to come back to my place for a drink?”
About Stephanie Julian:

Stephanie Julian writes sophisticated, sultry romance for the adventurous reader. She’s a reformed reporter with a BA in English and a perpetually messy house (and no real desire to do anything about that). She’s happily married to a Springsteen fanatic and is the mother of two sons who introduced her to the joys of Slipknot, Warped Tour and never-ending headaches. Connect with Stephanie: Website | Facebook Page | Twitter | Pinterest