In the first of a Montgomery Ink spin-off series from NYT Bestselling Author Carrie Ann Ryan, a broken man uncovers the truth of what it means to take a second chance with the most unexpected woman…
Graham Gallagher has seen it all. And when tragedy struck, lost it all. He’s been the backbone of his brothers, the one they all rely on in their lives and business. And when it comes to falling in love and creating a life, he knows what it’s like to have it all and watch it crumble. He’s done with looking for another person to warm his bed, but apparently he didn’t learn his lesson because the new piercer at Montgomery Ink tempts him like no other.
Blake Brennen may have been born a trust fund baby, but she’s created a whole new life for herself in the world of ink, piercings, and freedom. Only the ties she’d thought she’d cut long ago aren’t as severed as she’d believed. When she finds Graham constantly in her path, she knows from first glance that he’s the wrong kind of guy for her. Except that Blake excels at making the wrong choice and Graham might be the ultimate temptation for the bad girl she’d thought long buried.
Add LOVE RESTORED to your Goodreads list here!
Get your hands on LOVE RESTORED:
Amazon | iBooks | Barnes and Noble | Kobo | Google Play

By the time Graham punched out for the day, his muscles ached, and all he wanted was a beer. He walked into his house, stripping as he made his way toward the fridge. He grabbed a beer, finished taking off his pants, and leaving a trail of clothes in his wake, finally turned on the shower. While that heated, he drained his beer and studied his naked body in the mirror.

He might be nearing forty, but his body didn’t look it, at least not according to the last woman he’d slept with. Though, in his mind, you didn’t get the width of muscles, the scars and marks on skin, and the years of living without actually living those years. He might still have the strength he had when he was younger because of his job, but even under the ink that covered his body, he was aging. And he was fine with that.

That meant he was living.

No, he wouldn’t think about that. Not now. Not ever.

Graham ran a hand over his face and looked at himself once more. He was covered in dust, cobwebs, and whatever the hell else had been in and on the walls before they’d torn them down. They hadn’t wanted to take out all the walls, but some had been added on in the eighties and nineties and weren’t structurally sound. Eventually, with Murphy’s genius— and yeah, his brother was a freaking genius when it came to architecture— they’d have the place back to its former glory and up to code, with a few modern renovations to make the place inhabitable.

But the process of getting there was one dirty business.

He got into the shower and let the hot water slide over his skin, taking the sweat and dirt with it. As he closed his eyes, he leaned one hand on the wall in front of him, lowering his head so the water could get his back. His body ached something fierce, and because he pictured Blake’s face as soon as he closed his eyes, his dick ached, too.

Knowing he was probably making a mistake, he gripped the base of his cock, squeezing slowly before sliding up and down his length, twisting his wrist slightly to get better traction. He groaned, imagining Blake’s talented hands in place of his own. And her hands were talented. She was a tattoo artist and piercer, her hands were her work, her art, and he couldn’t wait to actually have them on his dick.

He pumped his hips, fisting himself as he imagined Blake on her knees in front of him, sucking him off, her lips wrapped around his cock and her hands playing with his balls. He played with the piercing at the tip of his dick, tugging just slightly to make his eyes cross. But it wasn’t until he imagined himself eating her cunt, licking up her sweet juices and making her come on his face that he felt his balls tighten and the small of his back tingle. He came hard, his come hitting the wall before sliding down with the shower spray. He groaned, his muscles tense once again even though he’d just come.

He hadn’t meant to do that, not when he’d have to face her later, and yet, he knew he’d do it again. He couldn’t help himself. And that’s how he knew he was the asshole he’d come off as when he’d first met her. 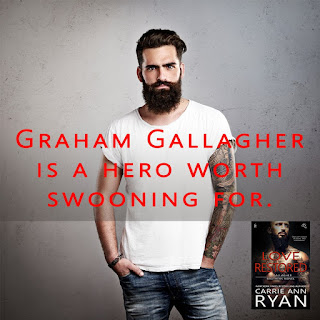 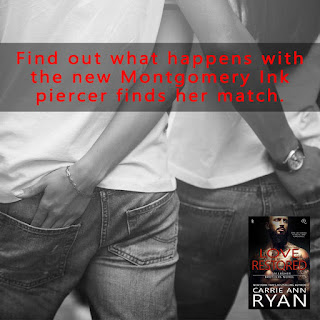 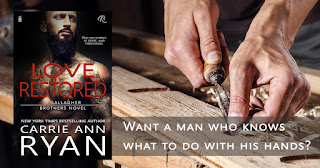 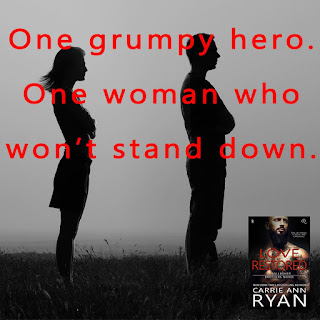 Carrie Ann Ryan is giving away a Kindle Fire! Enter to win via the Rafflecopter below. a Rafflecopter giveaway

Carrie Ann Ryan is the New York Times and USA Today bestselling author of contemporary and paranormal romance. Her works include the Montgomery Ink, Redwood Pack, Talon Pack, and Gallagher Brothers series, which have sold over 2.0 million books worldwide. She started writing while in graduate school for her advanced degree in chemistry and hasn’t stopped since. Carrie Ann has written over fifty novels and novellas with more in the works. When she’s not writing about bearded tattooed men or alpha wolves that need to find their mates, she’s reading as much as she can and exploring the world of baking and gourmet cooking.