Virtual Book Tour w/Giveaway: Confessions of Us by Alexandra Forry

Confessions of Us
by Alexandra Forry
GENRE: Romance

Alexandra Forry will be awarding a $40 Amazon or Barnes and Noble GC  to a randomly drawn winner via rafflecopter during the tour. Please visit GoddessFish.com to follow the tour, remember the more you comment better your chances on winning. 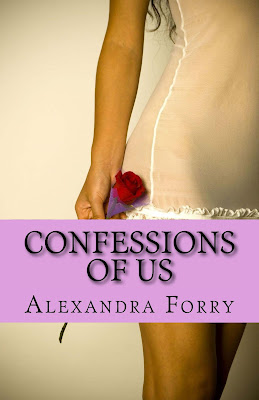 As a girl, Adaline was left orphaned due to gang violence and to be raised by her grandmother and her parents’ old friend Frank, now following in her parent's footsteps she finds herself at a crossroad in her life of what she wants and what she feels she has a responsibility to do. As soon as Adaline makes the commitment to the mafia however her life becomes riddled with lies, betrayal, lust, and murder. When the one person Adaline always thought she could believe in becomes the one person she can't trust a question begins to pull at Adaline's mind one day will she live through it or will she find herself in an early grave just as her parents did? Adaline is unsure of the answer but will do anything for the possibility of becoming a famous news journalist.

Confessions of Us will be Free during the tour.

"What do you want?" Her voice is spiteful, yet stubborn.

"I would be a little bit more polite Adaline." The man pulls back his jacket showing her the gun tucked into his belt. “What I want is very simple, I want you to tell me everything that our dear friend Frank tells you. Can you?"

"And why would I do that?" demands Adaline, working up her courage once more. "I don't even know who you are!"

"It's simple, try don't do what I want exactly, and your pretty little face and body won't look so pretty. I think you won't stay along above ground so that anyone will see the damage done to it." The strange man smiles sweetly as he says this, almost as if he were telling her that her grandmother had baked her a cake and wanted him to deliver it to her personally.

"So save my number on your phone under a title that does not tie me to anything. I am the pizza guy. Whenever you see Frank, talk to Frank or hear anything that has to do with Frank I want to know about it. Believe me Adaline, if you do not tell me what happens I will know. Do you imagine that I know you are currently helping him with a little project and dug around in the mayor candidate's offices?”

Alexandra Forry has an incredible talent for living vicariously through the colorful and intriguing escapades of her strong female characters and successful leading men.  Her first book, “Omerta Affair,” based on the true story of mafia boss Tony Torino and his paramour Evelyn Rosenberg has recently been adapted and re-released as “Timeless Endings”--romance fiction.  “Wildflower,” is an adventure in coming of age for both a young orphan and her repressed aunt who is trapped in a destructive marriage.  It is a beautiful story of life, hope, growth, and triumph and deals with many of the traumas of youth, such as bullying.
Alexandra Forry is familiar with life’s challenges.  She was born and raised in Las Vegas, Nevada. Now she lives with her loving family in Williamsburg, Virginia.  Alexandra has conquered the limitations of Cerebral Palsy to write exciting and engaging novels.  She has completed a number of talks and internet book tours and is a member of the Las Vegas Romance Writers and RWA.  She is currently working on her seventh book.

a Rafflecopter giveaway
By Unknown - September 23, 2016