Virtual Tour w/Giveaway: Once A Soldier by Mary Jo Putney

Don't miss the first in a Brand New Series....Rogues Redeemed! 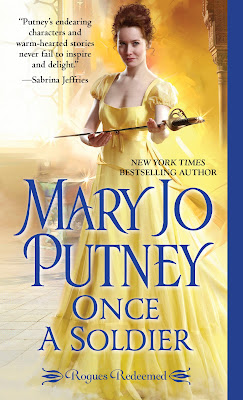 As heir to a title and great wealth, Will Masterson should have stayed home and tended his responsibilities. Instead he went to war. Now, after perilous years fighting the French, he intends his current mission to be his last. But all his plans are forgotten when he arrives in the small mountain stronghold of San Gabriel and meets her.

Knowing herself to be too tall, strong, and unconventional to appeal to a man, Athena Markham has always gloried in her independence. But for the first time in her life, she finds a man who might be her match.

Two of a kind, too brave for their own good, Athena and Will vow to do whatever it takes to vanquish San Gabriel’s enemies. For neither will back down from death, and only together can they find happiness and a love deeper than any they'd dared imagine...

In a burst of fury at the brutality of war, he hurled the empty bottle across the cellar. He meant to strike a section of plain stone wall, but instead the heavy bottle crunched into a rickety upright supporting one of the wall racks. The rack collapsed with a dusty crash as shelves of old crockery and unidentifiable objects pitched to the floor.
“Jesus, Masterson!” Chantry said indignantly as he dodged back, his head clipping the lantern so that it swung wildly. “Are you trying to kill us prematurely?”
The dust sent Will into a coughing fit before he managed to choke out, “Sorry. My aim was off.”
As he looked at the dust rising from the collapsed rack, the erratic light of the swinging lantern briefly illuminated straight lines gouged in one of the stones that had been concealed by the shelving. The lines were very faint, but the pattern looked familiar. Frowning, he levered himself up and lurched across the cellar. “Does anyone know who owns this house?”
Duval shrugged. “I heard that it belongs to British wine shippers who’ve operated in Gaia for a couple of generations, but I don’t know the name. Does it matter? The current owner and his household fled when the French confiscated the house.”
“It appears that a Freemason built the house.” Will reached the wall and traced the angular lines with his fingertip, confirming his guess. “Freemasonry evolved from medieval stonemasons’ guilds, so their symbols are based on the tools of a mason. This is a compass overlaying a square, a Masonic symbol.”
“So?” That was Hawkins’s gruff voice.
“Freemasons aren’t always popular. Some have been known to build escape routes from their homes in case rioters came after them. Maybe that’s what this one did.”
The dusty mortar around the block looked like all the other mortar in the foundation, but the side seams were a little wider. If Will’s guess was right . . . On a hunch, he looked at the collapsed rack. It made sense for the builders to have the necessary tools convenient if the escape route was needed.
Yes! One of the uprights had separated into two pieces, and both looked like hardened metal. He lifted a length that tapered to the shape of a narrow chisel. Perfect for gouging. He dug into the mortar on the right side of the stone, and it crumbled away like sugar icing.
“The devil you say!” someone exclaimed as the other men scrambled to their feet and gathered behind him. The tension was palpable.
Silently Hawkins picked up the other piece of the broken upright and started gouging on the left side of the block. Gordon bent over and began clearing away the wreckage of the collapsed rack so the area under the work space was open.
Duval asked, “Are you a Freemason to know so much about them?”
“I’m a part-time engineer,” Will explained. “The Royal Engineers corps never had enough men, so line officers like me are sometimes seconded to work with them if we have engineering experience. Very educational.”
“If there is an escape tunnel . . .” Hawkins’s voice broke for a moment. “Do you have any idea where it might lead? This house is full of French soldiers and there are guards all around.”
“My guess is the tunnel comes out among outbuildings where it won’t be obvious,” Will replied. “There’s no point in going to this much trouble just to be captured outside.”
With most of the mortar chipped away, Will said to Hawkins, “Step back.” Then he carefully shoved the wider end of his tool into the gap he’d made between the stones. The temptation was to use full force, but he didn’t want to damage his lever.
The stone shifted. Releasing the breath he didn’t realize he’d been holding, Will worked at the block until it was far enough out from its neighbors to get a grip on. He tugged and the stone moved toward him. Hawkins grasped the other end and they both pulled. Abruptly the stone jerked free and crashed heavily to the dirt floor of the cellar, narrowly missing Will’s left foot.
And behind it was a tunnel large enough for a man to crawl into. “Well, hallelujah!” Chantry breathed. 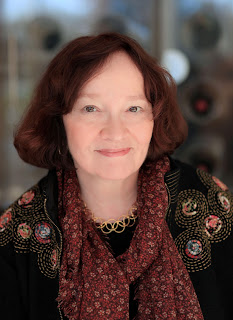 Mary Jo Putney is a New York Times and USA Today bestselling author who has written over 60 novels and novellas. A ten-time finalist for the Romance Writers of America RITA, she has won the honor twice and is on the RWA Honor Roll for bestselling authors. In 2013 she was awarded the RWA Nora Roberts Lifetime Achievement Award. Though most of her books have been historical romance, she has also published contemporary romances, historical fantasy, and young adult paranormal historicals. She lives in Maryland with her nearest and dearest, both two and four footed.
Website | Facebook | GoodReads