INVISIBLE by Allie Harrison is a sexy thriller that will steal your breath and set your chill your heart. Ellie Westfall is trying to live her life, raise her son, and keep out of trouble. Unfortunately, fate and evil have other plans. After surviving a bank robbery, Ellie is forced to put her life and son's life in the hands of FBI Agent Gil Trent, a man whose deep green eyes captivate her, and whose strength makes her feel safe for the first time in years. But Gil is hiding something. Can she trust him or will his secrets get them killed? Is falling in love worth the risk? Is trusting him worth dying for?

Join Allie Harrison and the Killion Group as we celebrate the release of Invisible with a Release Day Blast on June 28th. Included in this release day blast is exclusive content, reviews of the book, a spotlight of the book, and a giveaway. One GRAND PRIZE WINNER will receive an e-Copy of Hargrove House, book one of The Haunted Series! 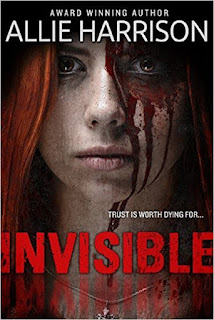 Synopsis:
After a terrifying bank robbery brings her face to face with a masked gunman, Ellie Westfall hopes she and her son are safe. But Ellie soon learns there are worse things to fear, like dead bodies, or maybe becoming one. And as shadows close in and a bigger danger threatens, she has to trust FBI Agent Gil Trent to keep her safe from the monster bent on making her his own. But Gil Trent is hiding something. Can Ellie put her life in Gil's hands? Or will his secrets get them both killed?

Excerpt:
He looked through the rifle scope. He only saw the three people in the kitchen. The blond girl laughed silently. The dark haired girl picked up a cookie and took a bite. He should shoot her for her own stupidity, putting those worthless calories in her body when her body was so perfect. Didn’t she know empty calories now only led to heart disease and fat hips later?

No other movement anywhere. He supposed his target could be in the basement. He could wait. He had time. He had patience. He had perfection.

As he moved the scope and studied the rest of the house again, he took in the tree in the back yard. It was a red maple, beautiful and symmetrical. He loved how the leaves started changing into a brilliant red. Maybe, after he finished this job, he would stop at a nursery and buy one. It would look good in his own yard.

A tall, good-looking young man of about twenty entered the kitchen from stage right, obviously from a hallway. The target followed him.

“At last…” Cross hairs in the middle of the man’s back, he drew in a deep breath and let half of it out. He would love to stay here a few more moments and revel in the rush that came with knowing the man had no idea he stood in the line of fire. But the target could any second turn and disappear back into the hidden part of the house. He didn’t have the luxury of taking that chance.

He squeezed the trigger.

Allie Harrison lives with her husband in Southern Illinois. By day, Allie works in the medical field, but when she clocks out, she hits the keyboard, crafting stories readers will love. When she isn’t enjoying fun family time, games with friends, reading, crafts, music, camping, biking, and hiking, she’s working to build fictional worlds and unforgettable characters.
Connect with Allie: Website | Facebook | Twitter | Goodreads | Amazon

Follow the blast to these participating blogs for new throughout the day: