The Titans possess power more than anyone anticipated, and Cronus is hungry for revenge after his own children locked him up in Tartarus.

No one is safe. Not even the humans. Visit the world of Descendant Prophecies in FROM TITANS by Mary Ting… 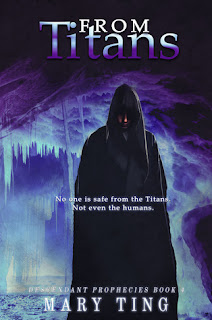 Everyone is searching for Mason.
Zeus sent Hermes, and the Oracles have used their magic, with no success. A sparkle of hope arises when Eris, the goddess of Chaos, sends an invitation to her wedding engagement party. She’s holding Mason hostage, and Skylar and her friends only need permission to enter Eris’s world to rescue him.
At the party, Eris gives them one condition: In exchange for Mason, they must travel to the Land of Reverse and bring back the bottle of gold water King Midas used to wash himself free of his gift. Further chaos follows when Eris not only sets up a hunt in the Labyrinth of Crete, but makes a bargain with the Titans she rescued.
The Titans possess power more than anyone anticipated, and Cronus is hungry for revenge after his own children locked him up in Tartarus. No one is safe. Not even the humans.

Add FROM TITANS to your TBR pile on Goodreads!
CELEBRATE THE RELEASE WITH A GIVEAWAY!
1 Grand Prize: $25 Giftcard to Amazon + Print Set of Entire Descendant Prophecies Series + Signed Bookplates
2 Runner-Ups: Digital Edition of Any Backlist Title from M. Clarke or Mary Ting

Excerpt:
“Cron-ass!” I roared in pain when the moving earth tossed me aside, grinding my shoulder against the pebbled road.
“His name is Cronus.” She grunted and landed flat on her stomach while I bounced on my back almost on top of her.
“It’s Cronass now,” I groaned.
Dust lingered around us. The clouds above spun. I closed my eyes in defeat and listened to Eris’s rampage.
“You’re going to get it, Cronus. You want Zeus? You’re going to have to work for it. I have plans for you. One will come out alive and the other one will die, or maybe both of you will die and I will rule the human world.” Her pitch rose and her laughter shrieked in madness.
Cronus was far too gone to hear any of Eris’s threats. I wished I were far gone too. 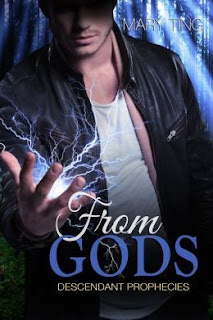 About FROM GODS (Descendant Prophecies Book 1)

***2013 InD'Tale RONE Award Finalist for YA****
Did you just see a flash of lightning across the sky on a clear sunny day?
Don’t blame Mother Nature.
Skylar Rome can’t wait to spend her last summer before college with her cousin, Kayla. Everything changes when they meet the Grand brothers. Skylar is sure she should stay away from Mason Grand, but their attraction is undeniable. Then Skylar’s life erupts into turmoil. She steps into a world where descendants of ancient gods have super powers, evil beings chase her, and questions arise about her own identity. She is running out of time and running for her life, while trying to unravel the mystery of what they want from her.
Forced into a battle set into motion long before she was born, will Skylar find the answers she seeks, or will she die trying?

Order this title at these online retailers:
Amazon US | Amazon UK | Amazon Audio 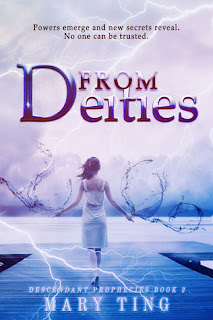 About FROM DEITIES (Descendant Prophecies Book 2)

A mysterious stranger enters Skylar’s inner circle, destroying her precarious peace. She begins college amid new secrets, emerging powers, fresh dangers, and a potential stepfather.
In New Olympus, a hidden dwelling place for descendants of the gods, she finally gets answers. But can she trust them? Skylar and the Grand family must work together with these descendants to discover the key to their rescue from the evolving, evil vultures of Hades.
As the threat increases, Skylar must learn to control her newfound powers and decide who to trust before it’s too late.

Order this title at these online retailers:
Amazon US | Amazon UK | Amazon Audio 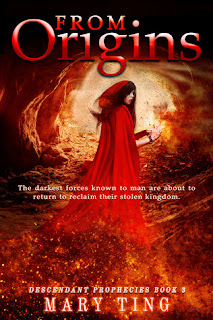 About FROM ORIGINS (Descendant Prophecies Book 3)

Faced with an impossible choice, Skylar and the other descendants embark on a deadly quest to the underworld to confront Hades, who has been plotting to kill them all.

They discover the ancient gods are not dead, as once believed, but are instead held captive in a secret location. In order to save the world from destruction at the hands of Hephaestus, the descendants must rescue their ancestors, the gods of Olympus.

Skylar learns more about her bloodline and her powers, but there is a heavy price to pay. The darkest forces known to man are about to return to reclaim their stolen kingdom.

Order this title at these online retailers:
Amazon US | Amazon UK

International Bestselling, Award-Winning, Author Mary Ting/M. Clarke resides in Southern California with her husband and two children. She enjoys oil painting and making jewelry. Writing her first novel, Crossroads Saga, happened by chance. It was a way to grieve the death of her beloved grandmother, and inspired by a dream she once had as a young girl. When she started reading new adult novels, she fell in love with the genre. It was the reason she had to write one-Something Great.