Guest Feature: James Lear author of The Sun Goes Down


Guest Feature: James Lear author of The Sun Goes Down

When you start a book, do you already have the whole story in your head or is it built progressively?
Of course I have the story in my head. Anyone who hasn’t planned the story before they start writing is an amateur, and not taking this seriously. Plans change as you go along, but you’d better have a very good sense of where you’re going, how you’re going to get your effects, cliffhangers etc. It’s about delivering something to the reader, not just indulging your own whims.

When and why did you begin writing?
I’ve always written, ever since school. It never occurred to me not to.

When did you first consider yourself a writer?
I was a journalist for years before I wrote a book, so as soon as I started getting paid for that I was a writer. Stephen King says that you can call yourself a writer if you publish a story and get paid for it, and you use that money to pay a bill. That sounds about to right to me.

The Sun Goes Down by James Lear 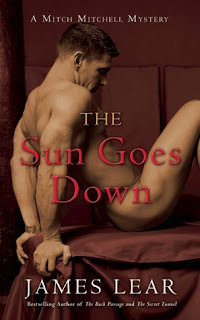 Mitch Mitchell needs a vacation, and he is determined to make the most of his trip to the Mediterranean island of Gozo. Death never takes a break however, and at the behest of fellow doctor Bob Southern, Mitch soon finds himself investigating the demise of a young, gay lance corporal. The police have ruled it a suicide, but the young man's boyfriend claims it was murder. Suspecting an official cover-up of a queer scandal, Mitch gets to work on an investigation that leads him into a labyrinth of lies, false identities and secret sex.

With tension, humor and plenty of Mitch Mitchell's exuberant sexual encounters, The Sun Goes Down cranks up the Mediterranean heat for one of his most baffling and dangerous cases.