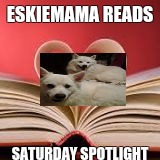 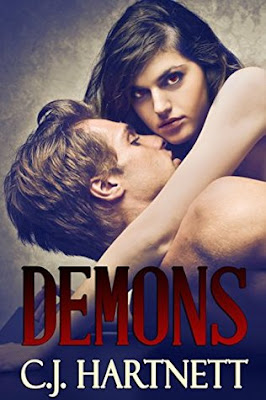 Succubus demons thrive on sex for power. Except Mina. It’s a simple life. No attachments. No attractions. But when she meets Caleb, the sex is phenomenal and she actually feels something. Caleb just wants a one-night stand, but after having mind-blowing sex, he changes his mind. They agree to be friends with benefits. When Mina and Caleb learn the truth, will their white-hot passion be enough to stop them from killing each other?
***Warning: This book contains explicit sex, graphic language and is intended for mature audiences.*** 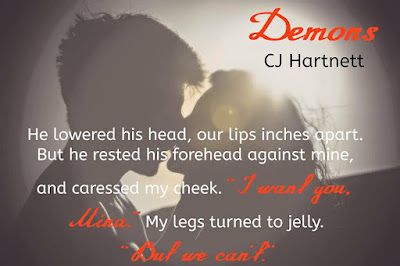 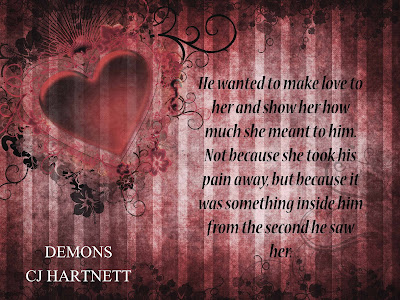 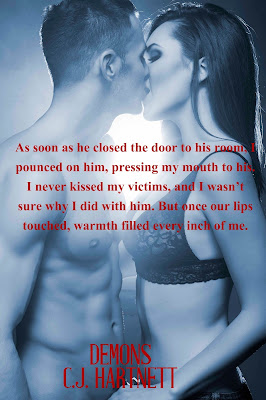 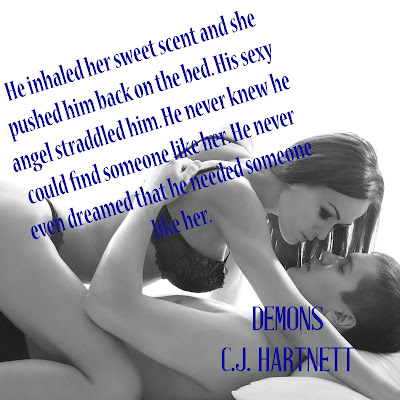 Q & A with C. J. Hartnett about Demons

Tell us about your Demons.
Demons is the first in a new horror/erotica series. It's about Mina and Caleb who find love despite their challenges. Succubus demons thrive on sex for power. Except Mina. It’s a simple life. No attachments. No attractions. But when she meets Caleb, the sex is phenomenal and she actually feels something. Caleb just wants a one-night stand, but after having mind-blowing sex, he changes his mind. They agree to be friends with benefits. When Mina and Caleb learn the truth, will their white-hot passion be enough to stop them from killing each other?


What initially inspired you to write this book?
I have always had a love for horror. The erotica came in and surprised me, but it worked.

Tell us little about the characters in this book.
Mina is a succubus demon who is weaker than most other demons. The demons are only allowed one kill a month - and that kill is supposed to be a murderer, or a human who has done bad things. Mina tends to get carried away and has killed innocent humans before. She is a strong woman, but is caring. Caleb has been hurt before and is just wanting to have fun. But there's more to him than he even knows about.


What was your favorite chapter (or part) to write and why?
My favorite part is when Mina and Caleb make love for the first time. It's honest, it's romantic, it's hot. But it develops their relationship and their characters.


What are your future project(s)?
I just released the second book in the Demons series, and now I'm working on a novella for the series. After that, I plan to write the 3rd book in the series.

Now for an exciting excerpt from Demons

I was on the prowl for my next victim. There were so many to choose from, but I had my eye on a particular one. Nate Jackson. Twenty-six years old. 6’1”. Chocolate brown eyes, tousled brown hair, bronzed skin. One of the youngest vice presidents of a top corporation, yet he had many monsters in his closet. They all did.
That was why we killed them. We thrived on them. Because we were demons.
I spotted him by the bar in the swanky club, wearing a white button down Oxford and jeans, trying to pick up some blond tramp. They always went for the blondes. I could show him a better time. Too bad he wore a white shirt. It would soon be soaked from his blood.
I was wearing a low-cut red, form-fitting dress so short that if I bent over, my ass would show. I wore no panties, partly because I couldn’t stand them, and partly because it was easier to fuck a man when you didn’t have to worry about unnecessary clothing.
I sashayed over to Nate, and immediately caught his eye. I knew how to grab their attention. Of course, it was always easier when they were drunk and horny. I walked past him, but I knew he would follow. I made my way to the dance floor, impatient to get this over with. I needed to kill. I had waited too long as usual. I started dancing to the annoying thumping music. It was loud enough to calm my demon self, but not for long.
I felt him behind me. His hands were on my waist as he moved with me. I could feel him hardening, and I couldn’t wait much longer. The blood in my veins craved him.
He turned me around and gave me a cocky smile. “You are incredible,” he said.
I gave him my best sexy smile and locked his eyes with mine. “Thank you,” I replied in a sultry voice. I kept dancing; wanting this ridiculous meet-and-greet to end so I could be done with him.
“I’m Nate.” He pulled my body close to his, his large hand pressed against my lower back. He smelled like expensive cologne and class.
“Rebecca,” I said. It wasn’t my name, but I didn’t need anyone around us hearing my real name.
He leaned down and pressed his lips to my neck. I wanted to bite him. Feed from him. I was struggling with the urges. I moaned, hoping he’d get the hint. He reached up with his other hand and squeezed my breast. His lips trailed to my ear and my cheek, his breath hot against my skin.
I turned my head as he neared my lips. I allowed no one to kiss me.
I pressed my hand against his hardening cock and rubbed through his jeans. He nuzzled his face into the crook of my neck, moaning. He pressed his teeth against my skin.
“Wanna get out of here?” he whispered.
Finally.

C.J. Hartnett spends her days writing dark stories with a bit of naughtiness. She is a horror enthusiast, loves to cook for her family, and thoroughly enjoys gardening. Her debut novel is Demons, a horror erotica.