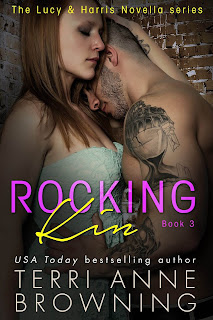 ROCKING KIN by Terri Anne Browning is LIVE!!
This is the 3rd novella in the Lucy & Harris series.

With one promise her life was changed…

Saying goodbye to my mother also meant saying goodbye to my life in Virginia. After reluctantly making a promise to my mom, I was California bound with the father who I haven’t seen since I was four years old. I was miserable living under the same roof as my step-monster and the two step-bitches from hell. My only saving grace? Lucy Thornton, daughter to Demon’s Wings’ drummer, Jesse Thornton. Without her friendship—and her odd rocker family taking me in as one of their own—I was sure I would have lost my mind after the first week.

A blast from her past…

I never thought I would see Jace St. Charles again. Honestly, after the way he’d broken my heart, I would have been just fine without having to see his face for the rest of my life. With Lucy’s close friendship with Harris Cutter, owner of the hottest new club in SoCal and Jace’s new boss, I was forced to see that damn face often. Forced to see the way every girl seemed to trip over themselves to get close to him.

Being tossed into one situation after another with Jace made it hard to fight the fact that I wasn’t as immune to him as I wanted to be. But, damn it, I was only human and he was hell bent on winning me back.


Rocking Kin is the third book in The Lucy & Harris Novella Series. 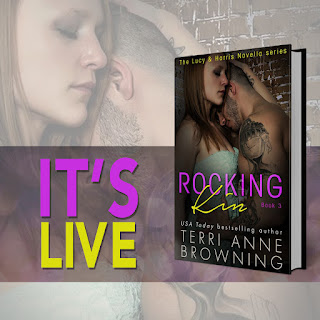 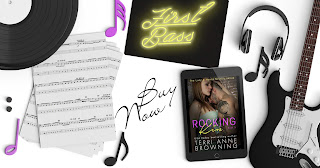 AUTHOR BIO: Terri Anne Browning is the USA TODAY bestselling author of The Rocker...Series. She started writing her own novellas at the age of sixteen, forcing her sister to be her one woman fan club. Now she has a few more readers and a lot more passion for writing. Being dyslexic, she never thought a career in writing would be possible, yet she has been on best selling lists multiple times since 2013. Reese: A Safe Haven Novella was her first Indie published book. The Rocker Who Holds Me changed the tables and kicked off The Rocker... series featuring the sinfully delicious members of Demon's Wings. The Rocker... Series has since expanded to OtherWorld with Axton Cage and his band members. Other books by Terri Anne include the Angel's Halo MC Series as well as The Lucy & Harris Novella Series. Terri Anne lives in Virginia with her husband, their three demons---err, children--and a loveable Olde English Bulldog named Link