Judi will be awarding $20 Amazon or B/N GC to a randomly drawn winner via rafflecopter during the tour.Please visit GoddessFish.com to follow the tour, remember the more you comment better your chances on winning. 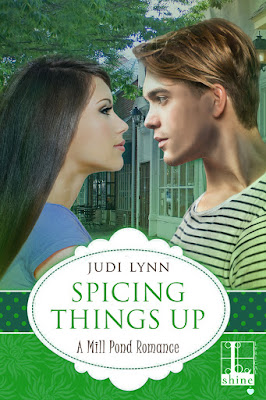 Tyne Newsome promised to help Daphne Ferris pick up the pieces if her professor boyfriend dumped her. Tyne is a hottie chef with no intentions of committing to anyone. He has big plans for his future. Daphne owns a stained glass shop and spends most evenings eating dinner with her parents. She prefers safety and solitude, but Tyne keeps bumping her out of her usual routines. He's not someone she can ignore. And soon, they find that they complement each other so well, they're both pushed to places they've never been before.

Tyne drove past Daphne’s shop to turn at the corner and pull into the alley that ran behind the buildings. He glanced at the stained-glass pieces displayed in her front window. Was the shop dark? He frowned at the CLOSED sign hanging in the door. What was up? Tourists crowded the sidewalks. They’d come to see the leaves and stopped at Mill Pond to shop and eat. Had she closed up early to run off with Patrick?
Nope, Daphne’s SUV was parked in the back lot next to his spot. No matter. They probably took Patrick’s car, but when he stepped through the back door to head upstairs, Daphne sat behind the cash register, her head in her hands, her shoulders shaking. Oh, no. He’d never trusted the professor. Tyne went to her. “Hey, you okay?” Dumb question. Who sits there and sobs when life’s good?
She turned away from him. He bent to wrap his arms around her. “He dumped you?” Did the egotist have another girl on the stringer in some other town?


No one but Daphne’s parents had been impressed with Patrick. The professor was so self-absorbed, Tyne wondered how he could relate to his students.

Q & A with Judi Lynn

Tyne, the protagonist in SPICTING THINGS UP, started out as a secondary character in Mill Pond #4, LOVE ON TAP. He’s a co-chef with Paula Hull at a resort known for its great food. I’m a pretty diplomatic person. I try not to hurt feelings, but I wanted Tyne to say what he thinks and not care about pushing buttons. I couldn’t “hear” myself saying any of the things Tyne did, so I had to make myself “hear” my grandson instead. Nate’s pretty direct, but he manages to say things that I never would and still not hurt feelings. He ruffles feathers sometimes, but only if he’s trying to be helpful. It was a tricky balance for me. Words slid out of Tyne that would never leave my lips, but somehow, he just walked off the page for me and came to life. I really enjoyed writing him, even though it pushed my boundaries. (And just so no one thinks I like one grandson more than the other, I fashioned Brody in book two after my grandson, Tyler).

There are ideas that come to you that just don’t want to leave. When you’re falling asleep, they expand on what they’ve already teased you with. The characters in the story start walking around in scenes. And pretty soon, you can’t wait to write about them. So yes, ideas inspire me. So does reading. When I read an author who’s so wonderful, I get excited about her voice and skills, that makes me want to write something as good.

I love Ilona Andrews and Patricia Briggs, and I learned a lot from reading them when I wrote urban fantasies as Judith Post, but they weren’t too helpful when I decided to write a contemporary romance. That’s when I read Catherine Bybee and Stacy Finz. Wow, they’re good!

Um, this is going to sound like I’m spastic, but my editor asked if I’d like to try my hand at a mystery, so that’s what I’m working on now. I’ll have six Mill Pond romances when the last one comes out in November, but way back--when I first started writing--I sold some mystery short stories to Women’s Sleuth anthologies and Alfred Hitchcock and Ellery Queen’s mystery magazines. I kind of liked hiding dead bodies under rugs and sprinkling clues and red herrings through stories. It’s fun playing with that again.

My sixth Mill Pond romance that comes out in November has a grumpy, nasty old man who’s a pain in the fanny to work with. When Mill Pond’s mailman writes his daughter that Axel won’t be able to care for himself soon, her daughter, who’s a traveling nurse, comes to help Axel decide on what kind of health care he should choose. He won’t cooperate, won’t let a visiting nurse check on him once a week, won’t eat Meals on Wheels, etc. Karli ends up staying with him longer than she intended to clean up him and his house and to feed him so that he gets stronger. And he loves to hassle her…because he really likes her. And somehow, watching them interact, I ended up liking the mean, old coot, and he changed as the story evolved. 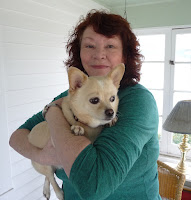 
Judi Lynn lives in Indiana with her husband, a bossy gray cat, a noisy Chihuahua, and a parakeet. She loves to cook and owns more cookbooks than any mortal woman would ever need. That’s why so much food sneaks into her stories. She also loves her flower beds, but is a haphazard gardener, at best.