Nancy will be awarding a $10 Amazon or B/N GC to a randomly drawn winner via rafflecopter during the tour. Please visit GoddessFish.com to follow the tour, remember the more you comment better your chances on winning. Far from the all the action of World War I, in a charming tourist’s spot on Cape Breton Island, Elizabeth Eames has stumbled into the most wonderful man in the world. She’s landed herself in a world where wealth reigns supreme; where any eligible bachelor would meet her mother’s highest aspirations. Of course, Elizabeth is dead set on the one she’s certain should not be mentioned in letters home.

Actually, there’s a lot she’s not mentioning. Something is not-quite-right at the grand resort Oceanside, but Elizabeth isn’t giving up her job on the basis of a few little suspicions. How likely could some monstrous crime be happening under her nose, anyway?

Daro swept back a snow-laden hemlock bough and I stepped into a wide, glittering expanse surrounded by crystal-coated evergreens. It might have been a glittering ballroom, so perfect and beautiful did it look. The very first time I had set eyes on Daro Michelson had been in Oceanside’s vast ballroom. I stopped to gaze up the center aisle between the magnificent trees and felt myself transported back in time.

It had been the mid-summer's eve party. 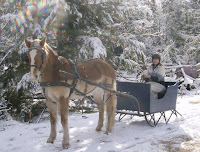 “Born in the sight of water,” are old lyrics that speak for me: For those of us from coastal towns, the sea forever calls.
“Trouble Cove,” features a journey up the eastern coast of Cape Breton Island – Nova Scotia’s northern tip – and the sea, in this, is more than the most romantic of backdrops. Wind and wave become part of the tale.

Like so many who have once visited Nova Scotia, the memory of iits rugged beauty fills me with an endless desire to return. Likewise, the island’s siren song entwines the plot, throughout; Trouble Cove.