Keith R. Fentonmiller will be awarding a $50 Amazon or Barnes and Noble GC to a randomly drawn winner via rafflecopter during the tour. Please visit GoddessFish.com to follow the tour, remember the more you comment better your chances on winning. 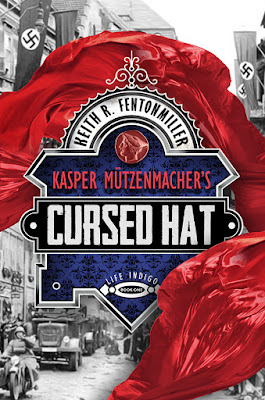 Berlin hatmakers threatened by a veil-wearing Nazi known as the “stealer of faces” must use the god Hermes’ “wishing hat” to teleport out of Germany during Kristallnacht. They won’t be safer in America, however, unless they break the curse that has trapped them in the hat business for sixteen centuries. Set in the Jazz Age, Nazi Germany, and World War II Detroit, Book One of the Life Indigo series is a family saga about the fluidity of tradition, faith, and identity. It will appeal to fans of Everything is Illuminated and The Amazing Adventures of Kavalier & Clay.

Kasper plunged his hand into the safe’s darkness and retrieved the hat. When he put it on, the warm scaly leather conformed to his skull like a blanket of heated wax. He closed his eyes and recalled his father’s instructions: First, think of the place. Then make the wish. Not the other way around. Kasper breathed deeply and then exhaled as much air as he could, a precaution to stave off the overwhelming nausea that surely would follow. Before the next inhalation, he thought, Take me there. In an instant, he was compressed to a point, drained of all material substance. The world went dark and silent. He felt only a sensation of impossible acceleration and then nothing at all.

Kasper wished himself from cabarets to booze cellars, concert halls, and boxing venues all over Europe and North America. Although hat travel made him queasy and headachy, whiskey took the edge off. Then, after a week of around-the-clock hat travel, the nausea and head pain receded, and he began to enjoy the rush of compression, expansion, and acceleration.
Well, labeling the experience “enjoyable” would’ve been a vast understatement. The nascent drug addict doesn’t merely “enjoy” a shot of heroin or a puff of opium; he relishes it, embraces it, becomes one with it. Using feels like an act of self-creation—conception, gestation, and birth wrapped into a singular, lightning-strike moment.

Keith is a consumer protection attorney for the Federal Trade Commission in Washington, D.C. Before graduating from the University of Michigan Law School, he toured with a professional comedy troupe, writing and performing sketch comedy at colleges in the Mid-Atlantic States. His short story, Non Compos Mentis, was recently published in The Stonecoast Review and nominated for a Pushcart Prize. His short story Exodus was just published in the Running Wild Anthology of Stories.