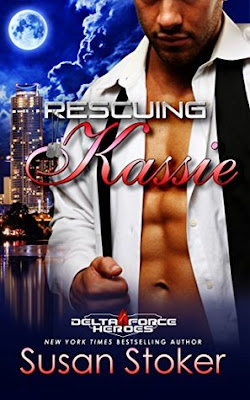 Graham "Hollywood" Caverly feels the chemistry with Kassie Anderson in the emails they've been exchanging through a dating site. When they finally meet in person, and that online chemistry proves to have real-life sizzle, he knows she's the one. He couldn't be happier when their first date, at an annual Army Ball, goes better than he could have imagined. Until Kassie drops a bomb.

Kassie doesn't want to approach Hollywood on the dating site, but threats to her family leave her no other choice. She definitely doesn't want to fall for the man. But fall she does. Hard. After she admits the ruse--and after some understandable anger on both their parts--Kassie wonders if, in Hollywood's arms, a happy future is within her grasp.

But her past always finds her, and in Kassie's case, that's a dangerous proposition--because she's connected to an old enemy of Hollywood's Delta Force team. Very intimately connected... And it will take Hollywood, his Delta brothers, and even some outside help to do what should have been done the first time--eliminate the threat once and for all.

** Rescuing Kassie is the 5th book in the Delta Force Heroes Series. Each book is a stand-alone, with no cliffhanger endings.

First of all I sure wish I could give this book more then 5 stars, for I would. Great and touching story.
Graham Caverly aka Hollywood found himself exchanging emails with Kassie Anderson also he found a chemistry that he had not felt before a connection with a woman, unlike anything he ever felt before.
Kassie Anderson also finds a chemistry unlike what she had with her ex boyfriend Richard, and now she finds herself liking Hollywood and agrees to a meeting with him to attend the annual Army Ball, and as happy as he is, the bomb that Kassie drops is not what he expected.
Kassie did not want to approach Hollywood, but the safety of her Family does not leave her much of a choice.
She falls for him, even thought that was not what she wanted to do, that made everything so much harder then she wanted right now. She finally decides to tell him why she is here, despite all the lies that her ex exposed her to and things he made her do.
The past finally caught up with her because her ex is none then an old enemy connected to Hollywood and the Team Delta Force.
Will Hollywood and Kassie overcome the shadows of her past, will her Family be OK, will Kassie survive what is coming for her, will Hollywood and the men of Delta Force be able to help her.
You will have to read it to find out, the story is a good one, it flows well as all Susan Stokers books do, plenty action, love and two souls coming closer to each other.
Oh least I forget, all our favorite characters are here in this book so it was like visiting great friends again.