Enter below for a chance to win ebook of each
I'm Not a Dragon's Mate, Bane's Heart & Kaid's Queen
from Sandra R Neeley 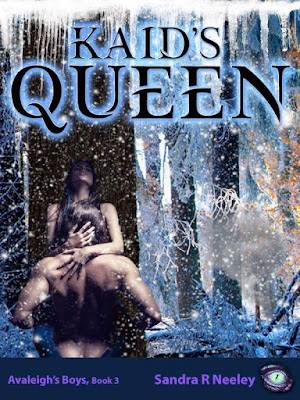 Kaid has watched as members of his clan have found and claimed their One; their Mate. He’s lonely and his Bear is growing bitter and despondent watching from the side. He’s tired of hurting. Then a visit from an old friend delivers his heart’s desire. She is beyond all he ever dreamed. But there’s a problem; she’s more Alpha than he is, housing
a monster that even she is afraid to release.

Delilah was born in captivity. Her parents murdered. All she has ever known is rules, permissions, cruelty, forced to barter in trade each day for her very survival. The concept of love, family and happiness mean nothing to her; they are merely words. She believes she’s been left to die a slow painful death. Then a chance encounter saves her. She is taken on a journey to an Alpha who could be all she never knew she needed.

While Kaid and Delilah struggle to form a bond other than the obvious physical one, a vengeful, unseen threat from the past scurries into the periphery of their lives, threatening not only their new-found chance at happiness, but the lives of every member of their clan and the very land they call home. Will this threat be detected in time to save the lives of all Avaleigh’s Boys and everyone they Love? 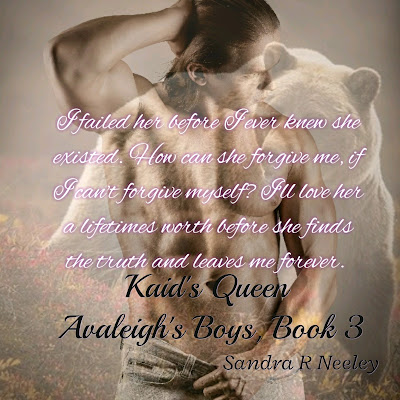 Tell us about Kaid's Queen.

Kaid’s Queen is a story of two individuals learning to overcome their past and to make compromises in order to find true happiness. It’s about taking a leap of faith, and learning who you truly are, and to be comfortable in that. And it’s played out by two smoking hot alpha’s surrounded by friends and family who also happen to be sexy, hot, stubborn shifters as well. It will make you smile, it will make you cry, and it will make you shout in anger and in joy. I hope you’ll give it a chance.

What initially inspired you to write Kaid's Queen?

I’ve had these characters in my head for as long as I can remember. They decided they needed to get out. I thought he was going to be the first to make himself known, but as his story developed, it became Avaleigh’s story. And Kaid and all his clan became her boys. They have been present in my mind nonstop, each impatiently waiting for their own story to be told. All except Bam; Bramley, or Bam as he is known to family and friends, is not sure he deserves one. He keeps peeking at me, hesitantly. But he will get one; it may take me a while to pry it out of him, but he will have his story as well.

Tell us little about the characters in Kaid's Queen.

Kaid is the Alpha of a ragtag bunch of shifters that have come together to become family, by choice. Each has their own set of issues and obstacles both past and present to overcome. Kaid’s Queen is the 3rd book in the sequence of stories they have inspired. As I said, Kaid is their Alpha and he is a Grizzly Bear shifter, Delilah is his Mate and you’ll have to read the book to find out what she is. His entire clan is revisited in this book as well; they are Bane and his brother Bam who are Black/Grizzly shifters, Maverik who is a Wolf shifter, and Goldy who is a Lion shifter. There are several supporting character in this series as well, one of which, Riley, allows you to get to know him a little better in this one.

This one was very difficult for me. It was necessary to show a lot of interaction between Delilah and the rest of the clan in order to show her growth as an individual, and as a part of the clan, as well as to set the stage for the reveal of her “Beast.” I found it difficult to balance the necessary dialogue and interactions and still keep the story moving.

I love the whole thing, but one of my favorite parts was Avaleigh and Janie taking Delilah shopping in the grocery store for the first time. She’d never been to a grocery store, and she had only a very limited idea of loving someone and taking care of them. That coupled with her obstinence and Kaid’s love of Bread N Butter pickles was a lot of fun to write.

I have another three books in this series, at least. Then one of the characters is a spin off to another series that Avaleigh and her boys will make cameo appearances in from time to time. In addition to that, I have several standalone books in my head, and I also have a series about hot, hunky, alpha, aliens. The aliens series was originally a standalone; it’s been in my head the longest. But the more I think about it, the more the lead character has started to show me his friends and insist that they need stories too.

This series is close to my heart. Each character has bits and pieces of myself and people I have known in them. I didn’t mean for it to, but this series has picked up a theme of family by choice, not blood. And the support and security that comes from “family.” Many of my fans have remarked on that exact theme and how much it means to them. My stories are Paranormal. But while my characters are Paranormal and their nemesis and struggles are also for the most part Paranormal, they struggle with some very real, true to life issues and insecurities. Everyone wants to be loved and accepted for exactly who they are. Everyone just wants a place to call home and to be able to protect and provide for the people they love. My stories bring reality and the Paranormal together. They will have darkness in them, because I believe that you can’t appreciate and embrace the light if you don’t experience the darkness and the struggle first. And life isn’t just smiles, unicorns and rainbows and neither are my stories. If they were, they’d be boring as hell. I’ve been told they have all the feels, give them a try. 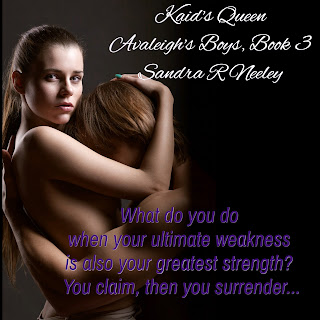 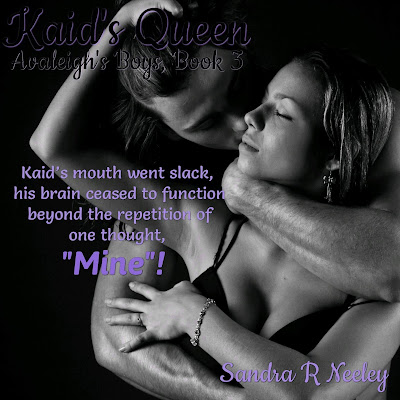 I write Paranormal Romance with a small town feel. Why, you may ask? Romance, because who doesn’t love a good romance, and Paranormal because, well, normal is highly overrated, so Paranormal it is.

Just a bit about me, I’m 53, I have two kids, one 30 and one 10 (yes, God does have a sense of humor), one grandchild, one husband, and a menagerie of animals. Literally, too damn many things that eat wandering around our property. I love to cook, I am a voracious reader. I am a homebody and prefer my reading time to a huge crowd. I have had stories and fictional characters wandering around in my head for as long as I can remember. I just recently started letting them out into the real world and I loving writing as much, if not more than, reading. I am a Self Published Author, and I like it that way because I can decide what and when to write. I am by no means a formal, polished, properly structured individual and neither are my stories. But people seem to love the easy flow of emotion and small town feel that naturally flows from them. A bit of a warning though, there are some “triggers” in them that some people should avoid. I’m a firm believer that you cannot have light without the dark. You cannot fully embrace the joy and elation that my characters eventually find if you do not bear witness to their darkest hours first. So please be sure to read the warnings supplied with each of the synopsis’ about my books.