The Pendant
by Jo Linsdell 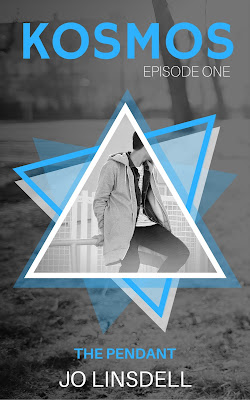 Matthew Smith feels like his life is a mess. Since his dad died he keeps arguing with his mum, is being bullied at school, and has a crush on a girl who doesn't seem to know he's alive. Just when he thinks things couldn't possibly get any worse he finds a strange pendant that changes his life forever. 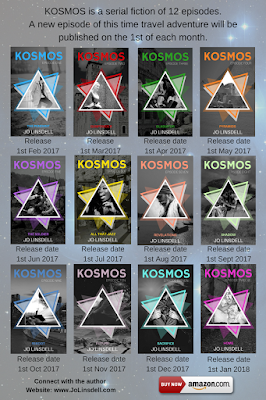 Tell us about The Pendant (KOSMOS Episode One).

The Pendant is the first book in my serial fiction KOSMOS. The series is about a boy called Matt who finds a pendant that sends him on an adventure through time. Each episode is a bite-sized instalment, where Matt finds himself in a different point in history. As he struggles to find his way back home he discovers the secrets of the pendant along with answers about his family. KOSMOS is a journey through time, but also a journey of self discovery.

What initially inspired you to write The Pendant (KOSMOS Episode One).

I wrote the series for my nine year old son. He loves reading but often gets put off by longer books. As a serial fiction of short stories, each episode is just the right length to pull him in. With a new episode coming out on the 1st of each month it also keeps his attention, and gets him excited about the next instalment.

The topic of time travel gave me the chance to introduce several different elements and themes to the story that allow it to be both educational and fun at the same time.

Tell us little about the characters in The Pendant (KOSMOS Episode One).

The main character is a teenage boy called Matthew Smith, or Matt for short. His dad died in an accident a few years ago and since then life has been hard for him. It really turned his life upside down. Through out the course of the series Matt learns the truth about his dad, and overcomes a lot of his problems. He discovers some important life lessons along the way.

There are a lot of other characters that pop up through out the series and each plays a role in Matt's journey. In The Pendant you get introduced to Matt's world. You get insight into his relationship with his mum, and her boyfriend Tom. You also meet his best friend Alex, bully Eric, and his crush Samantha.

Finding the time to sit down and write it. This is always my biggest struggle. 24 hours in a day just never seems enough to get everything done. I found that writing in short sprints helped. It's much easier to find 10 minutes here and there than it is to block out several hours all together.

In The Pendant, my favourite part is probably when Matt is at lunch with his best friend Alex. I really like the character of Alex. Everyone needs a friend like him.

There's a bit where they're talking about Matt's crush on Samantha and Alex tries to prove to Matt that she does know he exists by showing him that she "liked" a photo of him on social media.

"She doesn't know I exist" he said, as he poked at the pasta on his plate. "Sure she does" said Alex, as he scrolled through Facebook on his smart phone. "She clicked like on a photo of you just last week". "What photo?" asked Matt. Panic rising as he turned his attention to his friend. "The one that I posted of us to my profile" said Alex holding out his phone for Matt to see. Matt took the phone and looked at the screen. "Great, she's seen me dressed up like an idiot" said Matt and put his head on the table. As the scene goes on you get to see the contrast in the negativity of Matt and the positivity of Alex.

I have several books in editing stages at the moment including a YA, a chick-lit, a thriller, and several non fiction books. If I manage to find some time between revisions and editing, I have another children's serial fiction I'd like to write too.

KOSMOS deals with a lot of different elements and I hope it will help those going through hard times to realise that they might not always have control over what happens, but they do have control over how they deal with it; whether it's dealing with a bully, family problems, or picking themselves back up again when things go wrong. If you're not happy with something in your life, you can complain about it, or you can actively work to change it. I hope KOSMOS will encourage them to choose the latter.

Matt was torn between wanting to let her hug him and wanting to run away. There was something about a mum hug that always felt so right. The safety, and warmth of her arms was so inviting. He wished he could stay there forever. Then he remembered all the reasons why he was upset and pushed her away. "What do you care anyway?" he said.

"That's not fair Matt" said his mum.
"Life's not fair" said Matt, slamming the dishwasher door. He leaned against the white, flat-level cabinets. Pushing his hands into his pockets, he narrowed his eyes at her.
"Why won't you tell me what's going on?" she begged. "If I knew what the problem was, I could help make it better".
Matt stormed back over to the breakfast bar and picked up his school bag from the dark wooden floor.
"Matt" she cried. "Talk to me."
"Why?" said Matt turning back round to face her. "You don't care about what I want anyway. What's the point?"
"So this is about tomorrow night then?" she said with a frown.
"You know I don't want to go" said Matt crossing his arms over his chest. It wasn't the only reason for his bad mood, but it was a big part of it.
"I'm not going to argue with you about this Matt, especially not now. We're already running late".
"I'm not going" said Matt.
"Yes you are" said his mum holding her ground. "Tom and I have worked on this exhibition for months, and it's important for me, for us, that you come".
"So you're an us now then?", said Matt raising an eyebrow at her.
"Tom is a great guy Matt. I wish you'd give him a chance." she said stepping towards him. "Look, he's going to come round tonight after work to discuss the details for tomorrow. I'd really appreciate it if you'd give him a chance."
Matt side-stepped her and headed towards the door. "I'm late remember" he said through gritted teeth.
"We'll talk about this more after school" said his mum. "And Matt" she called after him, "please can you just try to consider that Tom is a good guy? That's all I ask".
Whatever thought Matt slamming the door behind him. She could have stupid Tom, and their stupid exhibition night. He didn't want anything to do with it, or them. If she cared about him like she said she did, she wouldn't be dating that jerk in the first place. Didn't she think about dad? What would he think if he knew she was seeing someone else? He'd probably turn over in his grave, especially if he knew it was Tom.

Jo Linsdell is the author of numerous books, including; How To Be Twittertastic, Virtual Book Tours: Effective Online Book Promotion From the Comfort of Your Own Home, Italian for Tourists, A Guide to Weddings in Italy, Out and About at the Zoo, Fairy May and The Box. She is also the illustrator of the A Birthday Clown for Archer series (written by Kathy Mashburn) and the Jasmine Dreams series (written by Maria Rochelle).
She is the founder and CEO of Writers and Authors and Promo Day. Linsdell studied A-levels in Business Studies, History and Art and has won several awards in her career. She was named the Who's Who in the writing industry in 2009.