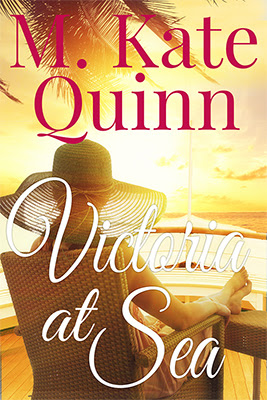 Why has no place in what the heart knows for sure.
On the eve of their wedding Victoria Gliden and fiancé Owen Walker call it quits. He accuses her of not being able to get over her deadbeat father’s vanishing act when she was a child and she and her cold feet run and don’t look back.
An interior designer, Victoria, has an important meeting on Cancun that could garner her a promotion and the plan was to incorporate her presentation with the honeymoon cruise that’s journeying to the island. Since she’s sure Owen is on his way to Portland to escape the aftermath of their ruined wedding, Victoria takes the honeymoon cruise anyway. Only Owen has the same idea and they’re stuck with each other for six days, five nights.
Tony Gliden, Victoria’s father, dies in a freak accident and is sent back to earth disguised as a crotchety old man with the mission to convince his daughter to believe in love. So, he, too boards the ship.
At sea, destiny takes a detour when Victoria befriends the quirky old man with kind eyes and together they join forces with a quartet of unabashed women in their fifties who drink pink martinis and flirt with the wait staff but are wiser than they look. While trying to dodge Owen, Victoria’s new acquaintances help her face old wounds and confront new fears.
Most of all, Victoria and Owen both realize it all boils down to one word—why?
By journey’s end will two broken hearts get their answer?

Two figures, a scrawny-assed man and a brittle-looking woman, sat opposite him at a sleek table, the surface a slab of marble. “Who the hell are you?” Tony’s voice pinged foreign to his ears, distant, echoic.

The man’s lanky arms were knobby like twigs, attached to narrow shoulders, but he sat with the authority of a doctor, his pale hands tented on the marble. His face, sunken-eyed, was somber like he was about to lower the boom to a patient. Tony pushed himself forward and stared the guy down.

When no response came from the guy, Tony pulled his eyes over to the woman. Her gray hair was long and silky. Young hair. The healthy mane looked odd on a broad who obviously had a few miles on her with skin like tree bark. She had a clipboard in her bony grasp, her knuckles like rocks under taut sallow skin.

“Either one of you going to speak?” The sarcasm felt good, sharp like a seed of jalapeno on his tongue. “Yoo-hoo.” He looked from one to the other as they sat there like mannequins. “And, what’s with those sweaters?”

They both sported white crewneck sweaters with a red “H” emblazoned mid chest like some kind of uniform. Tony’s gaze slid down to his own garments expecting to see the same indigo jeans and blue striped shirt he’d put on this morning. Instead, he was in a black suit that even he, no expert at such things, knew was a piece of crap. He wore no shoes and one big toe poked through a hole in a navy blue sock. He wouldn’t be caught dead in the getup.

“What the hell?” His words boomeranged off the white walls like a crack of thunder. “How’d I get in this pile of rags and what the hell am I doing here?”

The man at the desk pinned Tony with an onyx stare and screwed his lips into a knot.

“Are you always this grumpy?” The man’s voice was gravelly, like his vocal chords were rusted. His head bobbled like a dashboard toy.

The woman looked up from her clipboard and fixed her cloudy gray eyes on Tony, as well. He felt like a goldfish in a bowl on a shelf. The broad wagged a gnarled accusatory finger. “Come on,” she coaxed in a voice that sounded like she was under water. “Give us a smile.”

A familiar zing raced through Tony, the first sign of life amidst the fog in his brain. He didn’t like being chastised and he didn’t like these two clowns dressed like orderlies, or better yet, soda jerks.

He jolted up from the chair like it was electric and somebody pushed the “on” button. “Grumpy, huh? Tell you what, pal. You ain’t seen grumpy. And, unless you tell me the truth about why the hell I’m here, you’re going to get yourselves a good dose of Tony Gliden losing it. So, one last time, what am I doing here?”

“Tony,” the woman’s voice held a gauzy wrap of gratuitous condescension. “There’s no way to sugar-coat the facts, so put simply, you’re dead.”

Born to a feisty Italian mother and a gentle blue-eyed Irishman, I was given the name “Marykate,” inspired by Maureen O’Hara’s character in the movie, The Quiet Man, an old-time favorite love story that co-starred John Wayne. With a grandmother Catherine and an Aunt Mary the name was an obvious choice.

've been writing stories all my life. There's an old Macy’s box in my attic filled with my writings from childhood, now smudgy-looking pages produced on my portable Olivetti Underwood typewriter, an eighth-grade gift from my Grandmother Catherine.
I am a recent First Place winner of a short story contest sponsored by Reader’s Digest Magazine and write a column entitled “Boomer Humor” that appears monthly in my neighborhood newspaper.
My husband and I are our own love story. We have a slap-happy middle-aged second marriage with a combined total of six grown children, one delightful granddaughter, another precious little baby on the way and one ridiculously spoiled, amazingly handsome cat named Sammy.