One randomly chosen winner via rafflecopter will win a $50 Amazon/BN.com gift card. . Please visit GoddessFish.com to follow the tour, remember the more you comment better your chances on winning. 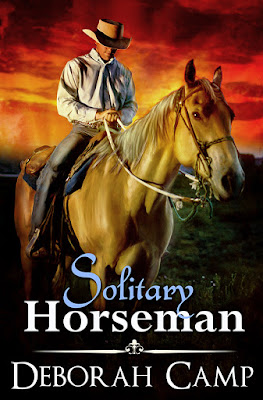 Texas rancher Callum Latimer believed that the Civil War had killed everything tender and yearning inside of him until he struck up a partnership with Banner Payne. His dark-haired, golden-eyed, spirited neighbor stirred embers that he thought were long dead . . .

Sunlight glided over hair as she shifted from one boot to the other, and before his mind could catch up with his instincts, Callum reached out and wrapped his index finger around one of her auburn curls. Its softness against his calloused skin sent longing through him like a rushing river. She’d be like that all over – soft where he was hard, giving where he was not. He heard her gasp and his heart bucked.

Topping a small ridge, he caught sight of the two cowhands, who were now with Eller and Hollis. Just as well. He didn’t mind that audience for what he was about to do. They needed to know what he would and wouldn’t put up with. As Butter approached them at a lazy trot, they all turned in their saddles to face him. Shadows played across them, but Callum was fairly certain that Johnson and Baines shared a quick and telling eyeball to eyeball exchange.

Yes, boys, time to reap what you’ve sown. Callum slowed Butter to a walk and then reined her to a stop near the semi-circle of cowpokes. He looked toward the mooing herd, some grazing and some lying down to chew their cud. They were all Payne cattle. He could tell because they were underweight by his standards.

“They’re sure on the puny side,” he said, swinging his gaze back to the men and zeroing in on Johnson. He figured that Jeb Johnson was the ringleader and Russell Baines followed along like a faithful hound. “Long way from bringing top dollar at market.”

“We’ll get them fattened up by market time,” Eller said, all puffed up with confidence he sure as hell hadn’t earned.

“But we will get these cattle up to a decent weight.” Eller gave him a wink.

Callum switched his attention to Johnson again. “Any of you know what happened to the heifer that birthed the calf we found this morning?”

They all exchanged befuddled glances, shaking their heads.

“I’ve looked for her off and on all morning,” Hollis said. “I found a trail, but it got washed out.”

“Over that rise, out by the Pitchfork foothills?” Callum asked, and Hollis nodded. “I saw that, too. Did you notice that it was the tracks of more than one cow?”

Callum nodded, all the while keeping his gaze shifting from Johnson to Baines and back to Johnson. “Mama cows with newborns don’t wander off with a couple of other heifers and leave their calves behind them.”

“Maybe a coyote was after her,” Baines said.

“Horses?” Hollis echoed with a scowl.

“They were mostly rubbed out by someone trailing a branch, making them hard to see. I had to get down off my horse and look real close to find a few of them.”

“Well, hell.” Eller crossed his wrists on his saddle horn. “I don’t like the sound of that, cousin.”

“Only one conclusion to make from it,” Callum said, staring hard at Johnson and watching the sweat bead on the man’s forehead under his hat’s brim and dampen his droopy black mustache. “We have some cattle thieves in our ranks.” From his periphery vision, he saw Hollis and Eller glance at each other and then direct their attention to Johnson and Baines.

“I’ve heard about Yanks roaming in these parts and stealing cattle,” Baines piped up, his dark eyes widening.

“I’ve heard that, too, but I don’t have any Yanks on my payroll.” Callum squinted one eye, taking a sharper bead on Johnson. “You took the Payne’s market money last season, didn’t you?”

“No!” Baines blurted, his eyes growing even bigger, bugging out even.

“We was robbed,” Johnson said, quietly, his face tightening.

“Yeah, I heard that story.” Callum rested his hand on the butt of his gun. “Since then Payne cattle have gone missing every few weeks – a few here and a few there. I reckon you’re in cahoots with another rancher or just hiding the stolen cattle in the brush land by the river. Letting them get fat before you drive them to market. Of course, you plan to hightail it from here before then.”

“You surely ain’t accusing us of stealing,” Johnson snarled.

“No.” Callum leaned closer. “I’m calling you thieving sonsofbitches outright and to your cowardly faces. Men are hung for what you’ve done, but I don’t have the time to catch you at your thieving and turn you over to the sheriff to be hanged. So, I’m telling you to get the hell off this land and don’t ever show yourselves to me again or I’ll put a bullet in your brain pans and not lose a wink’s sleep over it.” He stared hard at Baines and then at Johnson. “Either one of you doubt me? Say so now and I’ll demonstrate on one of you.” He tightened the ivory grip on his revolver and pulled it ever so slowly from the holster.

He could see that he’d made an instant believer out of Baines, but it took Johnson a few seconds.

“You’re plumb loco!” Baines said. “You can’t just shoot a man and get away with it.”

“I don’t see anyone who would say that what I do or don’t do isn’t right and proper.” He glanced at Hollis and Eller. Hollis looked off to the horizon and Eller gave a shrug and another grin.

Johnson stared at him before the blood slowly seeped from his face until he was pasty white. He looked away from Callum’s steady gaze and stared at Eller.

“You got anything to say about this, Hawkins?” Johnson asked.

Eller’s brows shot up. “Seems that Cal’s doing all the talking here. I’m just a bystander.”

Johnson glowered at him for a moment and then spit at the ground near Eller’s horse. “We don’t stay where we ain’t wanted. Where do we pick up our pay?”

Callum had to smirk at that. “You can pick it up in cow dung on your way off the ranch.”

Johnson’s head angled back as if he’d been socked. “You’ve made an enemy, Latimer.” He reined his horse around and gave it his spurs. Baines was right behind him, his copper colored mustang throwing up dirt clods.

Author of more than 45 novels, Deborah lives in Oklahoma. She has been a full-time writer since she graduated from the University of Tulsa. She worked for a few years as a reporter for newspapers before becoming a freelance writer. Deborah's first novel was published in the late 1970s and her books have been published by Jove, New American Library, Harlequin, Silhouette, and Avon. She has been inducted into the Oklahoma Authors Hall of Fame and she is a charter member of the Romance Writers of America. She is also a member of the Author's Guild.

Lover of the west and the people who tried to tame it, Deborah likes to write about strong, independent women and the men who are their equals. She grew up on a diet of TV westerns which have served her well. Since she appreciates men with devilish twinkles in their eyes, she likes to mix laughter in with the love scenes in her books. Also widely published in non-fiction, she writes and edits for a magazine focused on small businesses. Deborah taught fiction writing for more than 10 years at a community college. She is currently working on her next historical romance set in the wild, wonderful west.

Her books have been re-issued on Amazon for Kindle Direct and have attracted tens of thousands of new fans. For a list of them, visit her website.