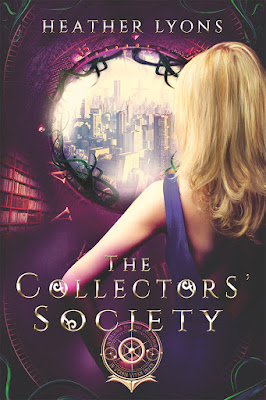 From the author of the Fate series and The Deep End of the Sea comes a fantastical romantic adventure that has Alice tumbling down the strangest rabbit hole yet.

After years in Wonderland, Alice has returned to England as an adult, desperate to reclaim sanity and control over her life. An enigmatic gentleman with an intriguing job offer too tempting to resist changes her plans for a calm existence, though. Soon, she’s whisked to New York and initiated into the Collectors’ Society, a secret organization whose members confirm that famous stories are anything but straightforward and that what she knows about the world is only a fraction of the truth.

It’s there she discovers villains are afoot—ones who want to shelve the lives of countless beings. Assigned to work with the mysterious and alluring Finn, Alice and the rest of the Collectors’ Society race against a doomsday clock in order to prevent further destruction . . . but will they make it before all their endings are erased?

* This is the first book in the adult romance/fairy tale Collectors' Society series.

“So.” He fully sits down, scooting against the wall next to me so that our bodies are just an inch or so apart. “About your request . . .”
“I had a request?”“You wanted me to show you around New York, right?”
Bloody hell, do I feel like a tomato right now. “I wasn’t—”
“I’d be happy to.”My head tilts to face him, but the truth is, it feels as if we’ve been spinning rather than sitting. “Can we start small, though? I have somewhere I have to go in a few hours, but a walk would be good. Maybe coffee? We can do the more touristy stuff later.”
Could my skin warm any further? Of course he has plans. Why wouldn’t he? Just because I’m his partner doesn’t mean he owes me anything. “I don’t want to inconvenience you—”
“Besides. For all of us who weren’t born in the Twenty-First Century, the true initiation is a coffee shop, you know. There’s one about six blocks over that’s good. It’s always crowded, but their espressos are worth the wait. It’s like liquid crack.” At the look on my face, he quickly clarifies, “It’s addictive.”
“I don’t drink coffee.”His eyebrows lift up.“I’m English, remember?”Oh, those beautiful lips of his curve upward again. “Plenty of English drink coffee.” “I prefer tea.”
“Luckily for you, they have tea at coffee shops. And hot chocolate, if that’s what you like.”
I glance down at the dress I’d found in Sara’s closet. It’s white and loose and barely grazes my knees, with crocheted lace trimming the hem.
As if he knows what I’m wondering, he assures me, “You look fine. Very boho. It’s a good look for you.”
“Boho?”
I’m annoyed at how much I like the quirk of his mouth. “Bohemian. Do they not say that in England? Are bohemians coffee drinkers, maybe? A rare breed?”
I give in and allow myself to giggle. A small weight lifts off my shoulders, even if momentarily.

Sometimes, the rabbit hole is deeper than expected . . .

Alice Reeve and Finn Van Brunt have tumbled into a life of secrets. Some secrets they share, such as their employment by the clandestine organization known as The Collectors’ Society. Other secrets they carry within them, fighting to keep buried the things that could change everything they think they know.

On the hunt for an elusive villain who is hell-bent on destroying legacies, Alice, Finn, and the rest of the Society are desperate to unravel the mysteries surrounding them. But the farther they spiral down this rabbit hole, the deeper they fall into secrets that will test their loyalties and pit them against enemies both new and old.

Secrets, they come to find, can reveal the deadliest of truths.

* This is the second book in the adult romance/fairy tale Collectors' Society series.

After years spent in Wonderland, Alice Reeve learned the impossible was quite possible after all. She thought she left such fantastical realities behind when she finally returned to England.

Now Alice has become a member of the clandestine Collectors’ Society, and the impossible has found her again in the form of an elusive villain set on erasing entire worlds. As she and the rest of the Society race to bring this mysterious murderer to justice, the fight becomes painfully personal.

Lives are being lost. Loved ones are shattered or irrevocably altered. Each step closer Alice gets to the shadowy man she hunts, the more secrets she unravels, only to reveal chilling truths. If she wants to win this war and save millions of lives, Alice must once more embrace the impossible and make the unimaginable, imaginable.

Allies, once inseparable, splinter until they break apart.
An insidiousness carves its way through Wonderland, challenging the land’s very existence.
Battle lines will be drawn as pages, long languishing in darkness, are finally illuminated.
Swords will clash, blood will be spilled, and lives will be lost.
For what is written can still be erased.