Blurb Blitz w/Giveaway: A Moment of Bliss by Heather McGovern

A Moment of Bliss
by Heather McGovern
GENRE: Contemporary Romance

The authors will be awarding digital copies of all 3 books on tour to a randomly drawn winner via rafflecopter during the tour. Please visit GoddessFish.com to follow the tour, remember the more you comment better your chances on winning. 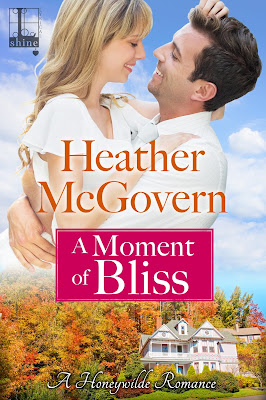 Nestled in the lush green mountains of North Carolina, the Honeywilde Inn will be a romantic’s dream getaway—if only the Bradley siblings can keep it running. It will take a combination of hard work, good luck, and the kind of love that dreams are made of…

Roark Bradley is no stranger to responsibility. Growing up, he practically raised his younger siblings while his parents threw themselves into working the inn—and arguing with each other. Determined to make the Honeywilde shine once more, Roark jumps at the chance to conduct business with a no-nonsense event planner who approaches him about celebrity nuptials that could put the inn back on the map. If only it wasn’t so tempting to discuss some no-strings attached pleasure with her instead…

Madison Kline is done with weddings—at least personally. Her own youthful mistake is a well-guarded secret, and one she refuses to repeat. But as she and bold, broad-shouldered Roark work together to make a rock star couple’s wedding a reality, she finds herself wishing romance didn’t feel like a four-letter word. Can either of them surrender their hard-won independence and workaholic ways for something sweeter—and even more rewarding?...

“Wright named them that. Says it’s because they’ll make your eyes roll back in pleasure. His words, not mine. And he calls the frosted ones Frosty Fixations.”

She rubbed at her mouth to hide her grin over the ridiculous names.

“He’s a fanatic, I’m telling you. But I can’t eat just one. Would you like to try a Pumpkin Pleasure Roll?”

She barely managed not to laugh like a hyena. Hell yes, she would like to try a whole plate of them and then roll around in the crumbs, but she was not going to fall victim to the inn’s goodies yet. Not until she knew this deal wasn’t going to blow up in her face.

She couldn’t believe it either. The self-restraint she was practicing right now would impress a nun.

Roark stepped aside. “Suit yourself then. Feel free to have a look around the kitchen. You’ll see the enormous vat of vanilla mixture over there. It’s been known to attack. Give it a wide berth.”

Madison turned away so he couldn’t see her smile. She was here to work; to broker a deal that meant she was capable of succeeding on her own. That deal meant practically taking over his inn for a weekend and pulling off the impossible in about three weeks. She was not here to smile and laugh with the good-looking inn owner.

The kitchen was clean but recently used and cluttered. Wright might be a messy chef, but he tidied up afterwards. The revamps Roark had mentioned showed in the new commercial oven and appliances.

Luckily, she was capable of doing a thorough yet speedy overview of everything. The longer she spent in this kitchen, the more tempted she was to stuff a cookie in her mouth.

A scenario ran through her mind. What was the likelihood she could scarf down one, possibly three, cookies without anyone noticing?

She finished checking out the kitchen and wound back around to the front, right in time to find Roark polishing off a Pumpkin Pleasure Roll.

His cheeks full, he dipped his chin, color rushing to his face. When he got done chewing, the strong line of his jaw was back in place, but his cheeks were still pink. Roark’s flush was a complete contradiction to his steady gaze and serious look. He wiped his fingers on a napkin and smoothed his shirt down, as though straightening a tie that wasn’t there.

“Busted.” He smiled, showing the tiniest hint of a dimple in his right cheek.

In that moment, Madison finally admitted the truth to herself. Between the cookies and the resort owner, Roark Bradley was the yummiest choice.

Heather McGovern writes contemporary romance in swoony, southern settings. While her love of travel and adventure takes her far, there is no place quite like home. She lives in South Carolina with her husband and son, and a collection of Legos that's threatening to take over the house. When she isn't writing, she's working out, or binging on books and Netflix.
She is a member of Romance Writers of America, as well as Carolina Romance Writers, and she's represented by Nicole Resciniti of The Seymour Agency.
Connect with Heather on her website, Facebook, Twitter, or her group blog. She'd love to hear to from you!