Q & A with Sarah Ballance author of Dangerous Illusions


Q & A with Sarah Ballance author
of Dangerous Illusions 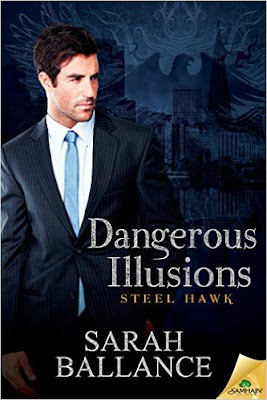 Does music play any type of role in your writing?
Yes! The right songs set the mood and the words just fly. The odd thing is the music doesn’t have to be about my characters. It just needs to make me think of my husband, and then the sexiness prevails.

Are experiences based on someone you know, or events in your life?
Not usually, at least not specifically. But the best part of every hero is my husband. That allows me to connect and identify with my characters (both the hero and the heroine who falls for him), which honestly REALLY helps me write the book.

What books have influenced your life most?
There’s one book that stands out, and that’s Crime Scene at Cardwell Ranch by B.J. Daniels. Years ago, I’d gotten a new computer with a built-in e-reader and that book was offered for free. I hadn’t read anything but parenting magazines for years, so when I cracked open that delicious romantic suspense I was transfixed. That, more than anything, made me want to write, and writing has absolutely transformed my life.

Are there any new authors that have grasp your interest?
I don’t have as much time to read between deadlines as I’d like, but I will say I’m a huge fan of both Kira Archer and Tawna Fenske. They make me laugh out loud with their romantic comedies.

Can you share a little of your current work with us?
Here’s a short excerpt from DANGEROUS ILLUSIONS:

A corner of Edward’s mouth quirked humorlessly. “You’re an investigator?”

“I am,” Sophie shot back, bristling under his acrid tone.

“And you have business with me?”

She glanced around. As far as she could tell, they were alone, but that didn’t mean someone didn’t lurk out of sight. She took a step closer and, with her voice low, said, “You of all people should understand why Mr. Steel would bring in an investigator.”

She’d pushed into his space, but he didn’t give an inch. Too late, she realized just how close she’d gotten. His clean, soapy scent was like a drug. Heat emanated from his form, leaving her flushed despite the chill of the air conditioner. The weight of his attention was crushing. Primal. Something animalistic stirred in his eyes.

“Is that a threat, Ms. Sophie Garza?” The words left his lips with practiced ease, but that didn’t mean anything. Not for a lawyer.

She met his punishing stare, determined not to back down. If he wanted a pissing contest, he’d better be prepared to lose. She’d been up against worse and won.

He was the first to break eye contact. His gaze flickered to her lips, dwelling there. The barest hint of amusement softened his features, and in that moment, she saw a hint of the man beneath the demeanor.

“I suppose, Mr. Long, that depends on whether or not you feel threatened.” She didn’t bother to quash the hint of sarcasm that wedged itself in her voice.

Her words drew his attention. He straightened, and rather than take a step back, he moved toward her, causing her an involuntary retreat. The predatory gleam in his eyes revealed nothing, but the hint of a smile teasing his lips spoke far more than words ever could.

Threatened, hell. He was toying with her.

His dark gaze left her swimming in uncharted waters, her body humming with a frightfully unfamiliar awareness. Startled, she swallowed. Twenty-nine years old, and never before had she experienced such a visceral response to anyone—a fact that could only mean one thing.

Guilty or innocent, Edward Long was a dangerous man.
**

Do you have anything specific that you want to say to your readers?
I never thought I’d be in this place. Published books were a dream I never had, but I still look at my list of available works and have to blink myself down. It’s amazing. But even more than that are the notes from readers. It may seem like a small thing, but your emails and messages mean the world to me and I answer every one. Knowing you connect with my characters so deeply just blows me away, and I can’t thank you enough for taking the time to let me know how they’ve affected you. Thank you for your love.

How can readers discover more about you and your work?
The very best way is by signing up for my monthly newsletter, which includes exclusive content and subscriber-only giveaways. You’ll find that at https://confirmsubscription.com/h/t/0B801D3AA4F986BF, or if you prefer to connect via social media you’ll find all my links on my website at http://www.sarahballance.com/contact.html. Don’t hesitate to send me a friend request!

Keep your lovers close, your enemies closer. Especially if they're one and the same.

With Steel Hawk still reeling from explosions at Zarrenburg Castle and at its own headquarters, company lawyer Edward Long's legendary stoicism has been severely tested. It's clearly an inside job, and no one is deeper inside than Edward—which leaves him squarely in the center of a frame.

Someone is using him to bring down the company he loves. Worse, the PI that Adam Hawk sends to investigate…there's something off about her. And something that seriously turns him on.

Operating under an assumed name, Sophie Hawk aims to dig deeper into the company's systems than any other investigator would dare. Especially with the prime suspect's hot-chocolate gaze tracking her every move.
As their dueling intellects strike sparks, the rising heat threatens the trip wires Edward has set up around his heart—and the secret that ties him to a man who'll stop at nothing to claim his right to rule the house of Zarrenburg. Or, if he can't have it, destroy it—and everyone connected to it.

Sarah and her husband of what he calls "many long, long years" live on the mid-Atlantic coast with their six young children, all of whom are perfectly adorable when they're asleep. She never dreamed of becoming an author, but as a homeschooling mom, she often jokes she writes fiction because if she wants anyone to listen to her, she has to make them up. (As it turns out, her characters aren't much better than the kids). When not buried under piles of laundry, she may be found adrift in the Atlantic (preferably on a boat) or seeking that ever-elusive perfect writing spot where not even the kids can find her.
She loves creating unforgettable stories while putting her characters through an unkind amount of torture—a hobby that has nothing to do with living with six children. (Really.) Though she adores sexy contemporary romance, Sarah writes in many genres including historical and ghostly supernatural romance and romantic suspense. Her ever-growing roster of releases may be found on Amazon , Barnes & Noble, Kobo, iBooks, Google Books, and ENTANGLED PUBLISHING.